Bridgestone have made some big in-roads into the UK ball market in recent years. Why? Well they make some very, very good golf balls, but also because they have adopted a different strategy to many other ball brands. While the tour is important to Bridgestone, they focus their efforts on making sure you have a ball that works for your game. That is why they have invested in a team of ball fitters that travel the country visiting driving ranges and golf clubs to make sure as many golfers as possible understand how and why they should be playing a particular ball.

We sent three Golfshakers along to experience a fitting with lead Bridgestone Ball fitter Joe Di Stefano. At the start of the fitting he explained that there is one rule - The Bridgestone Ball Fitting Challenge is always a fair test. Unlike many other brands it allows consumers to test their current ball against the recommended Bridgestone ball. This is how Martin, Matt and Stuart got on: 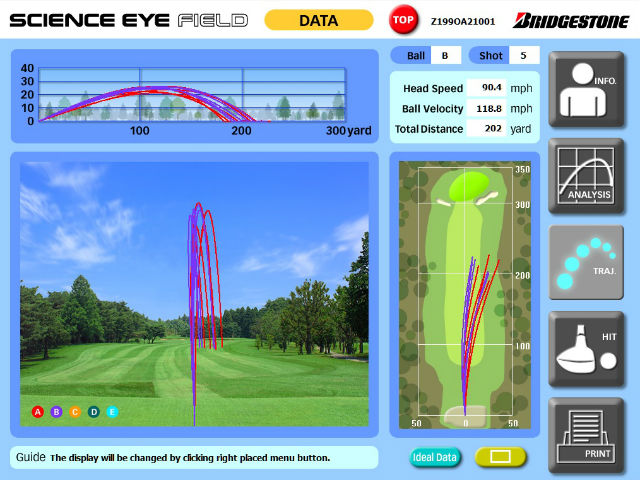 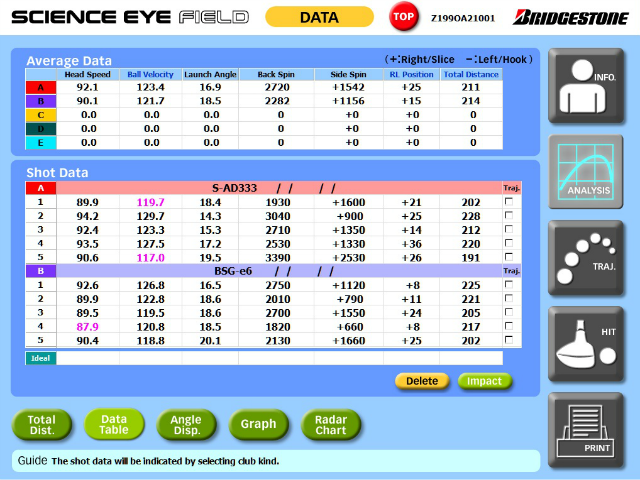 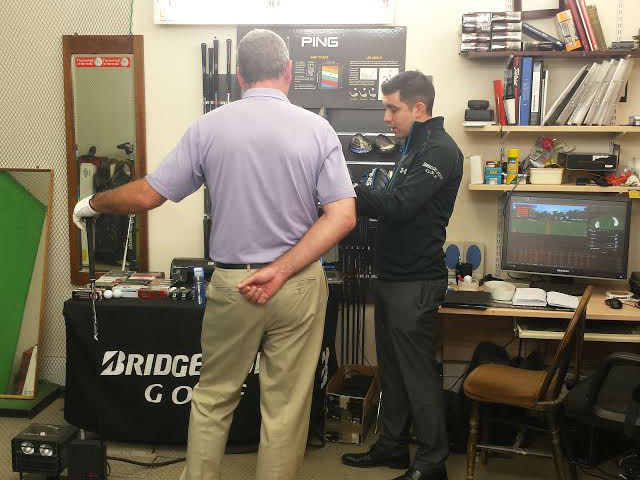 Martin’s swing speed is above average, but his weak shot is a cut/slice. I explained to Martin that his current ball, the AD333, is performing well because it is fairly low compression, but due to Bridgestone’s wider range of compression, we can squeeze more performance and forgiveness from the e6. Martin did not strike the e6 as well as he could have, but it still increased distance and tightened dispersion too (as shown in the above images). Overall, spin is lower and the purple lines representing the e6 show the ball finishing in the fairway more often – this is helped by the gradational core, which is lower compression than the AD333. In essence, the longer the contact point between ball and clubface at impact means a greater reduction in the glancing contact, creating a straighter flight. On average, Martin gained three yards, but more importantly the e6 provides him with more forgiveness on miss-hit shots. The bottom line is that he will hit more fairways, which was his main objective.

On like-for-like strikes, the e6 will generate a faster ball speed than the AD333 due to the gradational core and the 3-piece construction. So when Martin plays the e6 ball on his home course, he will find his drives going a little further than what he’s used to. However, the main benefit for Martin with the e6 is the greater consistency off the tee

I found the first part of the session very useful, particularly the explanation about the importance of being able to compress your golf ball properly, whatever your swing speed, to ensure it stays on the face of your club for that bit longer to reduce the amount of side-spin and so help keep the ball straighter and, hopefully, in the fairway for your second (and third?)shots

What I learnt from all of this was that, with a club-head speed of around 92 MPH, I really do need to use a lower compression ball and the e6 definitely helped me keep the ball straighter when using my driver – I think I had already worked this out in the past by trial and error but it was great to see the evidence from the technology to show specifically how this was affecting the results.

The session was reallyenjoyable and I would definitely recommend anyone who gets the chance to go along and try it for themselves. My next step in to put the Srixons back in the garage and buy a dozen Bridgestone e6 balls to see whether this can help me hit more fairways and greens in my next society game. 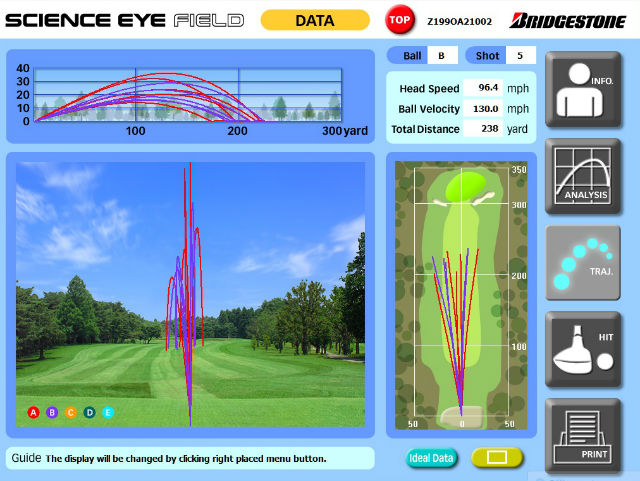 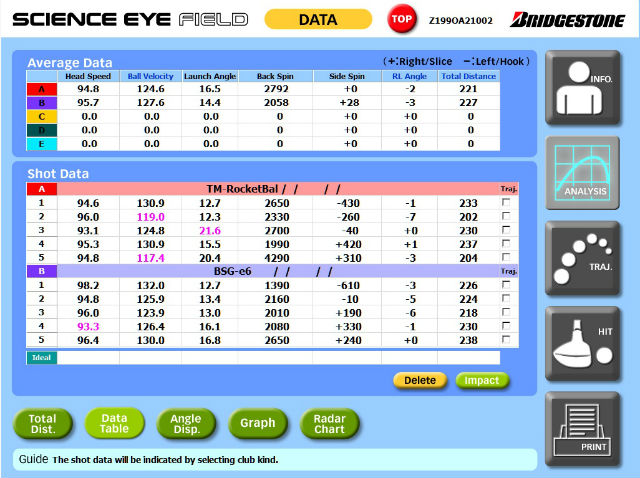 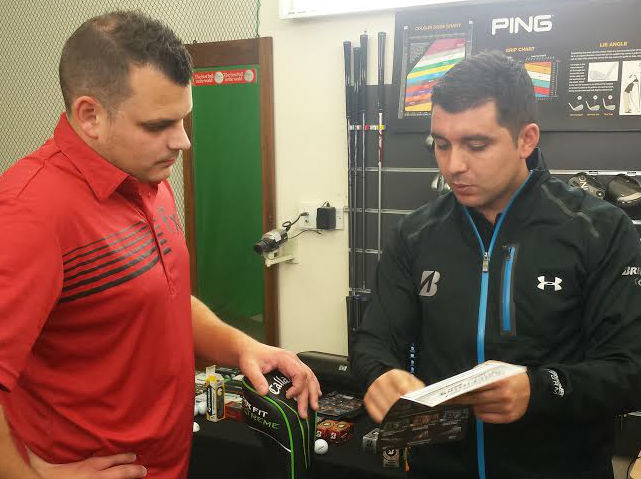 Matt has only been playing golf for five years, but he has a lot of potential. Like all club golfers, his biggest weakness is consistency. He has an above average clubhead speed and when he strikes the ball well with the clubface square at impact, the RocketBallz performs well – as shown by the data. His longest drive was 233 yards for instance. The ball I recommend now will not be the correct ball for Matt when his handicap comes down and he becomes more consistent, but after speaking with him and looking at the data, it’s clear that he’s in need of more accuracy rather than more distance. Playing with the e6 will allow Matt to comfortably compress the ball and hit straighter and longer shots off the tee. This was shown in the reduction of overall spin and tighter dispersion, and he gained distance too because the ball is in the fairway more often. Yes of course the true test will always be when he takes to the golf course, but we have been able to show the difference in performance by switching to the e6.

Matt’s main goal was consistency and the e6 is the most recommended Bridgestone model in ball fittings because it is the straightest ball in the range. The low compression gradational core and an anti-side spin inner layer helps to keep the e6 flying straighter...and longer. Matt should consider the Bridgestone Ball Fitting Challenge again in the future because it’s likely he’ll outgrow the e6 as his golf game improves.

During the fitting I learnt that the ball I was currently using wasn't ideal and was creating too much spin, in particular on my tee shots, which meant if my strike wasn't perfect (which it often isn't) I was either losing my drives left or right.

It was also very interesting to learn that Bridgestone in fact have a larger range of balls than I had originally thought. Joe explained that this was to make sure they have got something that will suit most golfers. Also worth a mention is that the guys from Bridgestone weren't interested in 'talking down' other ball manufacturers, nor were they there to try and hard sell Bridgestone balls to me, just simply offer some sound professional advice.

Not only am I glad I went along but have already considered making this fitting session a common feature when Bridgestone visit my area to make sure the ball they recommended is still right for my game. During the fitting I was recommended the Bridgestone E6 and after a trial with the balls I was given on the evening they went straight into the bag as a long term feature.

I would highly recommend a ball fit to any golfer. I have already spoken to the pro at my course to see if we can get the guys down at some point as its certainly something I feel the other members can, and should, experience and benefit from. 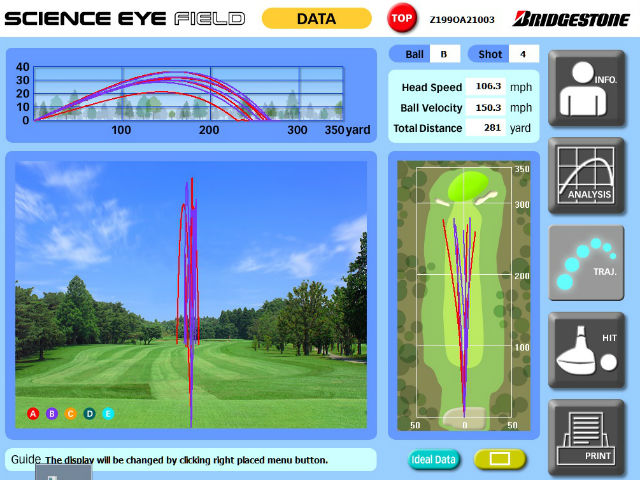 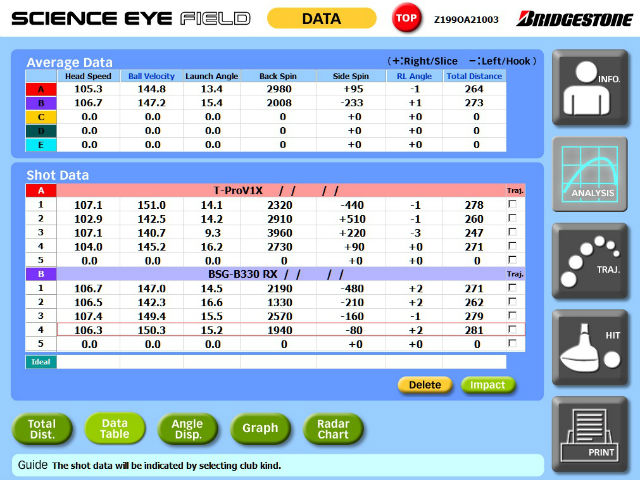 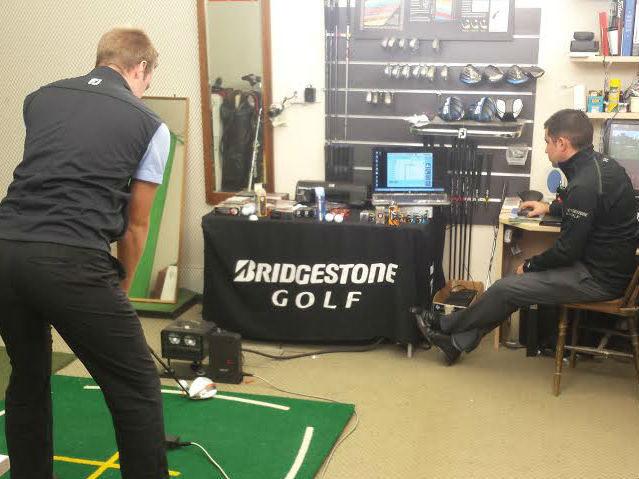 On average, Stu’s clubhead speed is around 106mph and he strikes the ball very well. He plays the Pro V1x for the firmer feel around the green, but likes the short game control due to the urethane cover. The Pro V1x is a high-compression Tour-level golf ball and Stu has the ability to produce good results with this ball. Martin and Matt both wanted more consistency, and Stu emphasised he wanted more control in his trajectory. He hits the ball a long way off the tee – proved by a longest shot with the Pro V1x of 278 yards. However, when analysing the ball flight, his spin level was too high and therefore hitting shots into the wind and controlling trajectory was something Stu struggled with. As a result, his distance control suffers.

Fitting the golf ball with the use of a driver best highlights the trajectory weakness because it provides a square-on hit to the ball, thereby highlighting the area where optimising compression can improve. If Stu over-spins the driver he will also over-spin his irons. Fitting from the tee highlights the weakness a lot more than when making a shearing contact with a 7-iron.

Stu was borderline between being recommended the B330 and the B330-RX. Both have a firmer urethane cover like the Pro V1x and sticking to a similar feel around the green will make the transition of switching golf balls a lot easier. As Stu’s club head speed was around 106mph and his overall spin was high, I favoured the B330-RX, which is a lower compression ball than the Pro V1x and the B330.

The results speak for themselves (see the blue lines representing the B330-RX in the image). There’s a big reduction in overall spin, which will result in more consistency particularly through his driver and long to mid irons. Remember, spin with the wedges and spin with the long game are separate topics. The B330-RX will generate high rpm levels off the wedges because it is a 3-piece construction. It’s strong enough to keep its shape to generate that glancing contact and, combined with the urethane cover, it produces Tour level control for Stu’s short game.

During the ball fitting you learn that different balls suit different peoples games and that the ball you use can make a huge difference to your game. I am very glad I went through the fitting as I'm more aware of what a certain golf ball can offer, and how the Bridgestone ball compared to the ball I used before.

I will definitely now give the Bridgestone Ball a try and see how it reacts on the course and see if the results from the fitting monitor work in a round. In my opinion it is well worth any given golfer going through a fitting. It is a great experience and will help any ability of player to get the most out of their game by using the correct ball.

The main benefit of the three Bridgestone golf balls recommended was consistency and all three readers highlighted this is what they wanted more than anything else. All three gained distance and showed tighter dispersion. Once they take the Bridgestone ball out onto the course for the true test, they will see the same trends – longer, straighter shots and a ball that suits their short game preference too.

For more on the Ball Fitting Challenge or any of Bridgestone’s golf balls visit www.bridgestonegolf.com