It was meant to be Mike Weir's shot at redemption, his opportunity to emerge from years of self-doubt and return to the winners' circle. The Canadian left-hander had played beautifully all week long at the Byron Nelson championship, but then came the final round, and the reminder that turning a 54-hold lead into a victory is not straightforward, even if you 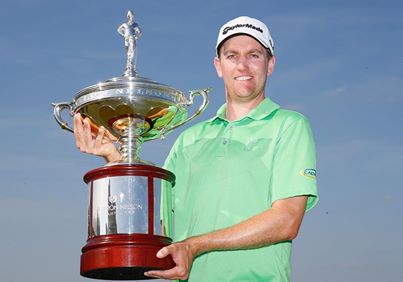 have won The Masters.

Instead of victory for Weir, we had yet another first-time winner on the PGA Tour. His name this time is Brendon Todd, a 28-year-old from Pittsburgh who turned pro in 2007 and has been trying to establish himself on tour ever since.
And boy did he do it in style.

He had only missed three cuts all season and already had two top six finishes to his credit, so we should have been too surprised at his breakthrough, achieved with a final round of 66.

His short game was nothing short of spectacular. He holed from a greenside bunker and he even played a chip left-handed, with the back of his club.

"I have a great short game," Todd said, "and even I'll say it was special this week." As he walked up the final fairway at TPC Four Seasons, with his ball on the green, Todd was able to savour the moment, knowing he had the tournament in the bag.

Of course there were tears of joy, and who could blame him?

This is a guy who has bounced and forth between the PGA Tour and the Web.com Tour like a yo-yo, and he was the only one of the leading contenders to play the final round without a bogey.

With Weir making an early charge two groups in front of him, Todd holed out from the bunker for birdie at the par-3 second. At the fifth, he rolled in a birdie putt inside 14 feet. At the ninth, he stuck his approach inside 6 feet.

And then at the par-4 13th, he looked to be in big trouble. After his tee shot landed inches from a tree, giving him no chance to hit right-handed, Todd took a 4-iron and decided to play left-handed. He didn't even flip the club over, instead using the back of it. His chip from 65 feet finished inside 8 feet. He buried the par putt.

"My brother-in-law is left-handed," Todd said when asked how he came up with the shot. "I putted with his left-handed putter before and I'm pretty good at it. So I tried to use that stroke."

If there was any doubt on whether he could slam the door, Todd delivered his final statement at the 17th, drilling a par putt from 13 feet, 9 inches. That gave him breathing room and a chance to enjoy the moment.

He has won twice on the Web.com Tour, five years apart and was the medalist at the PGA TOUR Qualifying Tournament in 2011. All that success helped him deal with the pressure of being in contention on the back-nine Sunday on the PGA TOUR.

"I drew on those experiences and none of them were as nerve-wracking as this one," he said. "I couldn't explain how I felt on the back nine today."

Weir admitted that he was disappointed after forcing his way into the lead during the final round, but said he was delighted with the progress he had made this season and that he feels he will again before much longer. In the end, he came up two strokes short, finishing second ahead of Charles Howell III.