Will 2014 be the year Oosthuizen fulfils his Masters potential?

IT COULD be argued that Louis Oosthuizen has not really kicked on from his victory in The Open at St Andrews in 2010.

Yes, there was his second place in The Masters in 2012, when he holed his second shot for an albatross at the second hole in the final round before finishing level with Bubba Watson after 72 holes. He then succumbed to Watson's incredible wedge shot during the playoff. You remember the one - it moved fully 50 yards from left to right and left everyone who saw it open-mouthed. Including Oosthuizen. 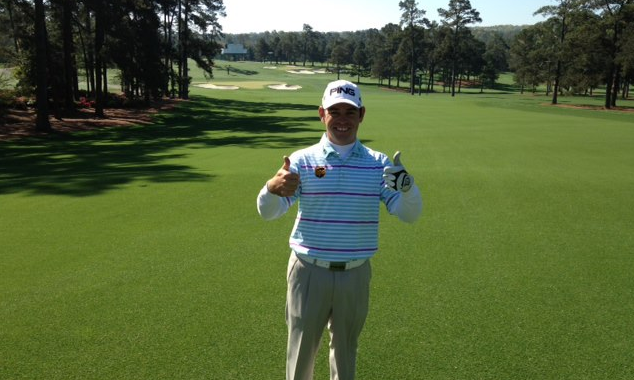 Bubba cried. He does that a lot. Bubba has a swing that could, at best, be described as agricultural. The left-hander with the pink-shafted driver claims never to have had a lesson in his life, and it shows.
Oosthuizen, on the other hand, possesses a swing that is a thing of beauty. There are those who believe that no other pro swings the club as well. And when you watch him in action, it is difficult to disagree.
So why hasn't he added to that solitary major victory? In the first instance, Oosthuizen is his own toughest critic and after his sensational runaway win at St Andrews - a victory that changed his life - he got it into his head that he had become a bad putter. This lead to much tinkering before he finally settled on gripping the putter with his left hand below his right.
Most people who have followed his career will argue that this change has made much difference to a putting stroke that was, like his full golf swing, as smooth as silk. But these things get into your mind, and the important thing is that Oosthuizen believes it has changed things for the better.
He won the Volvo Tournament of Champions early in 2013 and seemed set for a stellar year, having beaten the cream of European Tour golf. Like its American equivalent, this event is open only to tournament winners from the previous season. It may be an elite field, but it is also one of the strongest of the year. So Oosthuizen knew that he was in a good place.
But it didn't last. In May he was forced to withdraw from the Byron Nelson Classic and the US Open. He was also forced to pull out of The Open and at the end of July he announced that he was going to have to take a break from the game because of neck, hip and back injuries. Not good news when you are only 31.
No sooner had he returned than he announced that his back was giving him trouble again.
But Oosthuizen is tough as they come and he reported for duty at the Presidents Cup, though clearly some way from his best.
There were those who wondered if his career might be over, but the problem was that he had tried to come back too early. The South African is now injury-free. More important, he is also totally free of pain.
With so little game time under his belt, he wasn't expected to make much of a fist of his defence of the Tournament of Champions, but with the sun on his back and a home crowd cheering him all the way, he produced some magnificent golf in Durban.
Tommy Fleetwood, Branden Grace, Padraig Harrington, Raphael Jacquelin and Joost Luiten all had chances to win, but Oosthuizen sealed the deal with birdies at each of the final two holes. It was good enough to secure victory by a stroke.
"When I stood over the ball on 17 I saw that Branden had made birdie on 18 so I knew that second shot was crucial to give myself a good opportunity and I hit it really close," he said."And then 18, everyone thinks you just need to make a birdie but around that green it's not easy and luckily I was far enough past where I could pitch it back into the grain and get it close.

"It was nerve-wracking through the round but I finished strong and I'm just happy that I got it done. It's an awesome start for the year. Confidence-wise it's great. I haven't really played well last year with all the injuries so hopefully I can build from here on and just go better next time."
And what about that golf swing?
Oosthuizen is relaxed and well balanced over the ball. He delivers every ounce of his 170-pound frame to the ball, with his chest, arms and club working together. It's powerful and it's fluid.

"I have no idea why I swing the way I do," says Oosthuizen. "I just try to get the timing right and all the basic things."

Pete Cowen, one of the most highly respected coaches in the game, says Oosthuizen is one of the best there is when it comes to maintaining the connection between the body—what Cowen calls "the engine"—and the arms and club—"the steering."

"Sometimes my backswing gets long, and I get in bad positions," says the player. "The club also can get behind me coming down, so I have to flip my hands to catch up to my body."

Cowen concludes: "He's always been hyper-mobile in his shoulders, and that can lead to problems. We've worked hard on shoulder stability, because you've got to load them if you want to knock it out there. And that's what Louis does better than most."