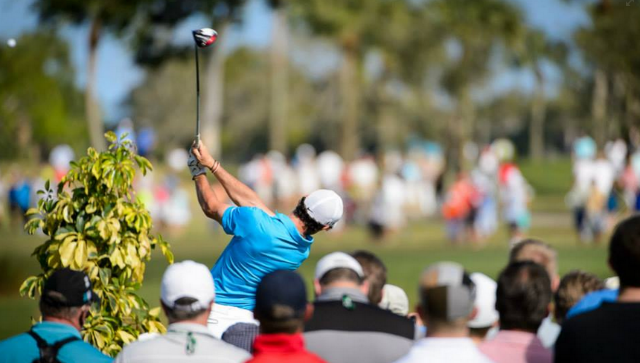 AFTER five holes of the final round of the Honda Classic, Rory McIlroy was 13 under par, in cruise control and on his way to a welcome return to the winners' circle on the PGA Tour.

The 24-year-old Northern Irishman had a torrid time in 2013, admitting at one stage that his brain had gone and that he hadn't a clue where his next shot was going. A player who had found the game ludicrously easy, now couldn't string four good rounds together and started sliding down the world rankings.

At 22 he had been a double major champion and a world number one. Suddenly he couldn't buy a putt or find a fairway. There were many, many low points in 2013, but none surely worse than when he walked off the course during the first round of the Honda Classic, where he was defending champion.

When he won the Australian Open in December, beating local hero Adam Scott, it seemed to indicate that he was back to his best. He then started brilliantly in the Dubai Desert Classic before falling away.

But that was surely a blip. It certainly seemed so when he returned to PGA National at Palm Beach in Florida and opened with rounds of 63 and 66. He led after day one, he led after day two and he led by two after 54 holes.

McIlroy was meant to win. Instead, the title went to Russell Henley, but only after a quite extraordinary final day or, more, especially, a mind-boggling final few holes.

Rory said that he lost in Dubai because he was trying too hard. As the pressure began to mount at Palm Beach, McIlroy started to hit the ball left. He made some remarkable saves, but, inevitably, it got to him and the shots started to dribble away.

Henley, who was playing with him in the final group, was also feeling the pressure but then he birdied the 13th and chipped in for a birdie at the 14th to move to 10 under and tie with McIlroy.

The American then put his tee shot in the water at the par-three 15th, while McIlroy produced a glorious up and down to save par. With Henley taking five, McIlroy led Ryan Palmer by one and Russell Knox of Scotland by two.

At the 16th, it was McIlroy's turn to make a mistake, driving into the fairway bunker. He hit his second shot fat and it finished in the water short of the green. A double-bogey took him back to eight under par. At the same time, Palmer was making a hash of the par-five 18th. He took four from the edge of the green to drop a shot and finish on eight under.

McIlroy, his brain frazzled, put his tee-shot at the par-three 17th into the bunker and failed to get up and down, so he was now seven under par.

Up ahead, Knox could only manage a par at the 18th to tie with Palmer. So there were two in the house at eight under par.

McIlroy and Henley both hit superb drives at the 18th. Henley, needing a birdie to take him to nine under, finished left of the green in two, fluffed his chip and two-putted for a par. Like Knox and Palmer, he was eight under.

The Northern Irishman produced a three wood that was, without doubt, the shot of the tournament. It came to rest no more than 12 feet from the hole. If McIlroy could hole it for an eagle, he would win. It slipped agonisingly by the hole.

So we had a four-way playoff, featuring Palmer, a three-time winner, McIlroy, a former world number one, Henley, who won his very first PGA Tour start at the Sony Open last year, and Knox, a Scot who had never finished better than tied ninth.

The playoff was something of an anti-climax. All four played the 18th again, and Henley was the only one who could birdie it, so he picked up the money and the title.

But the big question everybody was asking was: is McIlroy back? He may not have finished the job but yes, he is back and he will be winning tournaments throughout 2014. Look no further than Rory for The Masters!

He says that he has not felt so positive since the autumn of 2012, after he had won his second major championship, the USPGA, by eight strokes. After that, as we know, he lost form and then suffered a period during which he could not put four good rounds together.

“Those highs and lows were emotionally draining,” McIlroy said. “That is why one of my goals for this year is consistency.”

In that respect, McIlroy remains a work in progress, but he will be relishing the prospect of The Masters at Augusta next month.

McIlroy hits amazing shot into the a8th at the Honda Classic