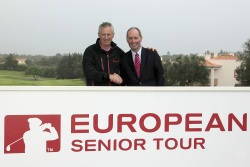 Cleveland Golf and Srixon ambassador, Andrew Murray, stormed to victory at the European Senior Tour’s Qualifying School Final Stage this week, after a one under par final round 70, at Pestana Golf Resort’s Pinta Course.

Murray, who had son Tom on the bag as caddie for the week, entered the day one shot off the lead, before closing out the tournament with a 3-shot victory, to win his first tournament victory since The European Tour’s Panasonic European Open in 1989.

The 57-year-old plays a Srixon Z-STAR ball and carries a number of Cleveland Golf products in the bag, including the new Cleveland Golf 588 Custom Driver and 588 RTX wedges, to go with his 588 CB Forged irons and 588 MT 3 and 4 irons.

Cleveland Golf 588 CB Irons offer a classic design with incredible feel, optimal workability and trajectory control. 588 RTX wedges offer golfers up to 20% more spin around the greens from any lie, thanks to Rotex face technology. The 588 Custom Driver is Cleveland Golf’s longest driver to date and offers golfers 12-way adjustability.

This marks the second international victory in a week for the brand as Kevin Stadler won the Waste Management Phoenix Open at the weekend.

Murray said: “I’m so chuffed to win again as its been a while! I played some really controlled, solid, golf all week. Having Tom on the bag was a masterstroke; he was calm and reassuring throughout the week! It was a treat to play well and execute our game plan in that manner. I’m thrilled to bits with the win.”

Srixon players have now amassed over 70 international victories since the start of 2013 and won three of the world’s money lists in the 2013 season.

Andrew Murray In the bag: