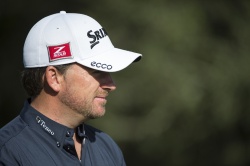 Danish brand ECCO have announced the extension of its endorsement agreement with Graeme McDowell, who will continue to showcase the company logo on his headwear and compete in its award-winning golf shoes on the PGA and European Tours.

“For a long time on Tour I’ve been wearing the World Class style which is quite traditional and goes great with a pair of classic-looking trousers,” says McDowell. “But for casual rounds at Lake Nona or even hanging out at Nona Blue it’s been BIOM Hybrid all the way and I may just choose those to go with some new outfits for next season.”

One of the world’s most popular players, McDowell made history in 2010 when he became the first European in 40 years to win the U.S. Open Championship. That same season, he rose to further global prominence by securing the winning point for the European Ryder Cup team, and capturing titles at the Chevron World Challenge, Celtic Manor Wales Open and Andalucia Valderrama Masters.

“Graeme’s one of those rare players that nearly everyone admires, which obviously helps make him a tremendous ambassador for our brand,” says Jesper Thuen, Global Sponsorship, PR & Event Manager – ECCO Golf. “His short game is so exceptional and he’s just coming into his prime, which is why we look forward to seeing him hoist trophies in ECCO for many years to come.”