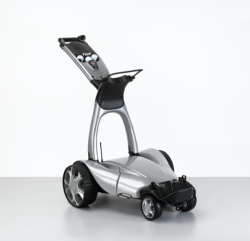 The popular Z3 Push also posted very strong figures, with an increase of 27% across all channels. Sales via stewartgolf.co.uk saw a significant increase, with order volume increasing by almost 40%.  This was helped by sales of accessories, with the Universal Rain Cover proving particularly popular.

Export sales also grew dramatically, more than doubling when compared to December 2012. This was helped by new partnerships with key European retailers such as Amazon in Germany & France. This is an early indication that the new ‘direct-to-retail’ strategy announced in September at Golf Europe has an excellent chance of success in 2014.

Looking at 2013 overall, Stewart Golf continued to perform strongly. The biggest increase in sales has come from the expansion of sales to the trade in the UK. The Z3 Push has become a firm favourite among the trade, with record numbers now stocking the trolley. This awareness of Stewart Golf at store level has also led to increased sales of the X & F Series remote products via the same Z3 stockists.

In 2013, 25% of sales were exported, proving the continued international credentials of the Stewart Golf range. In total Stewart Golf shipped to 34 countries, the main markets being Canada, USA, Australia and the key European countries.
Stewart Golf CEO Mark Stewart said, “I am very pleased to announce these figures. Despite the seemingly gloomy general retail news, we have been able to increase our sales significantly. Working closely with our retail partners to offer added-value promotions on our X and Z series trolleys has been a real success. We are targeting our UK trade sales in particular this year so hope to see these figures grow further in 2014.”