Bjorn wins the Nedbank - In the Bag

Thomas Björn powered his way to victory in the Nedbank Golf Challenge in Sun City, South Africa, shooting four under for 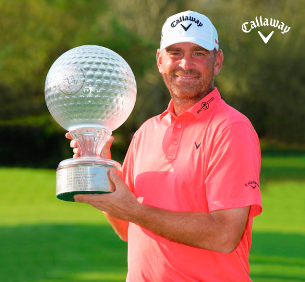 his final nine holes, including two eagles. Björn was three shots behind the overnight leader going into the final round before shooting a 65, to add to his other rounds of 67, 70 and 66, to finish on twenty under par and win by two.

Such was the great Dane’s consistency over four rounds, he ended the week with some stunning statistics, finishing 1st in Greens in Regulation ranking, 3rd for overall Driving Accuracy and 3rd for Driving Distance. He also dropped only three shots in 72 holes!

Forty-two-year-old Björn said: "This is right up there with the best days of my career. I am very proud of the way I played - it's a very special day. It’s not often you make two eagles on the back nine on a Sunday when you are in contention – it was just one of those days when it was my day.

“The five-iron I hit into the 10th was the shot of the week, and then I got a bit of luck on 14 because the ball pitched in the bunker and made it to the green but I still had to hole the putt and those are the breaks you need to win golf tournaments.”

Thomas Bjorn - In The Bag

Tour winners - In The Bag

Tags: Thomas Bjorn in the bag