PING Golf has announced the launch of its new  Rapture driving iron, which the club maker says offers innovation and 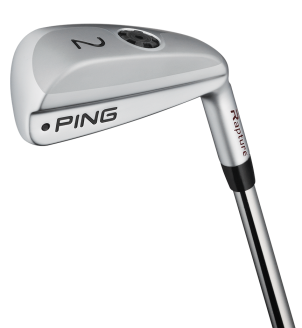 performance that are unmatched in the category. Significant tungsten weighting in the heel and toe creates a high MOI for a head its size, making the Rapture easier to hit than a long iron. At the same time, its wider sole gives the Rapture the playability of a hybrid but with much less spin. As a result, the 18-degree head delivers a low, penetrating ball flight that maximizes distance and control.

“The Rapture driving iron has been well-received by tour pros because it provides longer shots and a controlled trajectory,” said John A. Solheim, PING Chairman & CEO. “You have the best of both worlds. It’s more forgiving and generates much faster ball speed than the 2-iron equivalent, yet it launches lower and spins far less than a comparable hybrid. The low, penetrating trajectory offers control and command, which is essential for keeping the ball under the wind, for example, or when you’re playing a hard, fast course and you want to maximize roll out.”
PING say that a key attribute of the Rapture driving iron is its flat, 455 stainless-steel face, which contributes to greater ball velocity and promotes workability because it has no bulge and roll. The large sole in the 17-4 stainless-steel head locates the CG low for optimizing launch conditions and turf interaction. “This club is a great option off the tee but it’s also effective in making solid contact from the ground,” Solheim said. “It’s a versatile design that reflects PING’s commitment to custom-engineering solutions for golfers, in this case a club that plays a more specialized role in their shot making.”
The shaft in the Rapture is a half-inch longer than a standard 2-iron shaft. Solheim said PING’s proprietary TFC 949 graphite shaft promotes greater momentum and inertia for improved energy transfer, resulting in faster ball speeds and more distance.