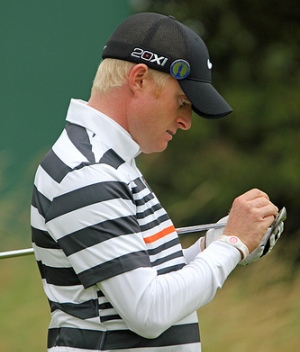 Reports in the Daily Telegraph suggest that Simon Dyson could be facing a suspension following a rules violation at the first European Tour 'Final Series' event which was played in Shangai last week.

A suspension would be highly unusual and even more so when you consider Dyson has already been penalised for the violation. He was assessed a 2 shot penalty and DQ'd following a review of footage by European Tour rules officials.

Dyson was seen by a TV viewer tapping down the line of his putt on the 8th green in the second round of the BMW Masters. Later reviews showed that he tapped down a spike mark. The penalty for that infringement is a two shot penalty. Dyson had already signed his card and a s a result he was DQ'd from the event.

Further discussions of a suspension have been fueled by Dyson's denial of any memory of the event. According to the Daily Telegraph, rules official were said to be "outraged" by the violation and Dyson's account of it. .

Despite the fact that Dyson has already been penalised the European Tour Rules Committee will now decide whether to convene a disciplinary hearing. Dyson will then have to recount the event and may face a fine or even a ban.