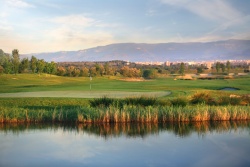 A new study of European golfers reveals that Spain remains the No.1 travel destination for visitors from the UK, France, Germany and Scandinavia, with more than 28% of respondents playing golf in the country over the past 12 months.

The research also revealed the popularity of other destinations with 17% visiting Portugal, 16.1% travelling to Great Britain & Ireland, 7.5% booking trips to Turkey, 7.1% visiting France and 6.9% booking long-haul golf trips to the USA.

The Spanish study also revealed that a golfer's nationality impacts on their choice of region they are likely to visit, with British and Scandinavian golfers preferring the Costa del Sol; French golfers more likely to visit Costa Brava; and German golfers travelling to all regions, including the Canary Islands.

Peter Grimster, IGTM Exhibition Manager, said: "This latest study proves that Spain remains at the heart of the European golf tourism industry and illustrates why thousands of golfers still put its golfing regions at the top of their wish list."

Some of the key contributing factors that put Spain ahead of its rivals was the standard and range of the country’s golf courses, consistent levels of high quality accommodation and the favourable year-round climate.

Peter added: "As Spain is the host country for this year's IGTM we will, of course, be welcoming a host of representatives from across the country, including 100 resorts, clubs and tourist boards, showcasing the country’s finest golf spots including host destination Catalonia, as well as Andalucía and the Balearic and Canary Islands."

As host to IGTM 2013, the Catalan region of Costa Daurada is rapidly growing its reputation as a golf destination. Three years ago, less than 2% of total rounds played on the Costa Daurada were by international golfers. Today, that ratio has increased to 30% and continues to grow.

A summary of the report, with some additional findings, will be presented at IGTM, the premier global event for golf tourism, taking place at the PortAventura Convention Centre, Costa Daurada, Catalonia, Spain, November 11-14, 2013.

Are Membership Costs Too High And Green Fees Too Low?

Want to Experience The Ryder Cup in 2020?

10 Things Only Tour Pros Use