Kevin Streelman - The Long Road to the Top 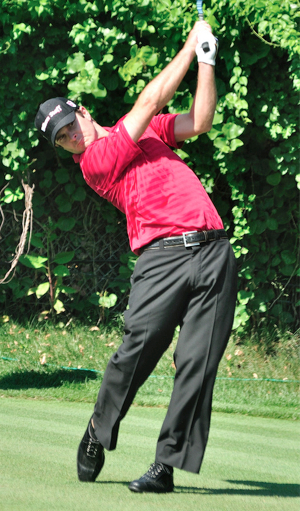 If God really does love a trier, then he must have a special place in his heart reserved for Kevin Streelman, the American who has finally made the breakthrough after years spent trying to scrape together a living on the mini tours in America.

For a time it appeared that the work he put into his game was never going to be rewarded. Several times, Streelman sat down and asked himself whether it was worth the struggle as he drove himself around America to compete in tournaments with little or no prize money at stake, where if you failed to make the cut then you left for the next town with nothing in your pocket other than more bills.

Streelman drew hope and inspiration from those who had travelled the same road – Ian Woosnam won The Masters and became world number one, but only because he possessed the self-belief to convince himself that all the failed trips to qualifying school would eventually bear fruit.

The Welshman slept in a battered old caravanette before he finally did make the breakthrough that was to change his life forever.

And Streelman wanted a piece of that cake too. He zig-zagged across America in pursuit of his dream, wearing out more than one car engine in the process. It all seemed to be a pretty thankless task and he came within a whisker of giving it all up for good and chasing a job as a club pro. At one point he did actually apply for a club post but, having reached a shortlist of two, it was given to somebody else. Had he been offered the job, we may never have heard of him.

Then along came the Western Open. Streelman was persuaded to take part in Monday qualifying and secured a place in the tournament. He found himself paired with Mike Weir, the Canadian left-hander, during the opening two rounds.

"It was just after he had won The Masters, and I had the chance to get a close-up view of how a major champion went about his business," said Streelman. "It was a real eye-opener for me. He was meticulous in everything he did and although I didn't play well and missed the cut by a long way, I took something away from that week."

Golf wasn't Streelman's first choice – he also excelled at tennis, baseball and basketball, and it wasn't until he produced some good performances in national junior golf tournaments that college coaches began to take notice. He eventually decided to go to Duke University, and that was where he made up his mind that he could make a living from golf.

He turned pro in 2001, and so began a struggle that would eventually see him reach the PGA Tour in 2008. He started off by borrowing his mother's Nissan and headed off to play on something called the Dakota's Tour. In the years that followed, he also plied his trade on the Gateway, Hooters, and US Pro.Tours.

During those years, Streelman went through three cars as he drove more than 300,000 miles. One of his lowest points came when he ended up broke and stranded in southern California, but still he wouldn't give up.

He twice missed the final stage of qualifying school by a single shot. Most people would have quit. Not Kevin. He remained utterly convinced that, one day, he would make it, and he was right – in 2007 he won three times on the mini tours and went off to qualifying school with a sense of optimism.

He nearly missed the cut but four late birdies kept him in the field and he went on to gain his card.

A series of top 10 finishes in 2008 saw him end his rookie year 35th in the FedEx Cup standings. He also led the US Open after the first round. Finally, the rewards were coming his way. And then he won the Kodak Challenge in 2009.

Ever since, he has steadily improved and this year saw another victory, at the Tampa Bay championship in March. He followed that with a third place at the Heritage, sixth at the Wells Fargo and second at the Players Championship, where he was pipped by Tiger Woods.

Streelman then missed four cuts in succession before rediscovering his form at the John Deere Classic during the week before The Open Championship at Muirfield. "I could easily have won that tournament had a few putts dropped, but it wasn't to be," he said. "To be honest, I had my eye on The Open. The last time I played was at Royal St George's, and the weather was dreadful, but I really enjoyed the challenge it provided.

"It was a real surprise to arrive at Muirfield and find sunshine and blue skies, but you still need to adapt your game. I love the course, and I love the idea of having to use your imagination to get around here," he said.

"I put a new Wilson Staff two iron in my bag, and I used it a lot at Muirfield. It is possible to hit the ball out there a long way with this club, so why would anybody want to risk hitting a driver and ending up in the knee-high rough?"

Streelman easily made the cut thanks to rounds of 74 and 71, but then struggled horribly in the third round, where he crashed to an 82. It is to his eternal credit that he bounced back in the final, scoring a 73 on a day that was difficult for scoring.

He is one of the game's good guys. Streelman has worked long and hard for his rewards - at the age of 34, he is eighth in FedEx points list, established in the world's top 60 and has started thinking about next year's Ryder Cup. It just goes to prove that if you have a dream then you should follow it.

The Different Ends of the Professional Golfing Spectrum