PowaKaddy (PK) celebrated its 30th Anniversary in style last week as dignitaries from within the golf industry and the media gathered to applaud three decades of industry-leading performance, innovation and award-winning designs.

The celebrations were kick-started with a detailed history of the company from new owners David Catford and John deGraft-Johnson, highlighting PowaKaddy’s most impressive product categories over the years, record-breaking sales achievements and impressive accolades. Guests were also given a first-hand experience of PowaKaddy’s new Freeway Family, as they competed over the London Golf Club’s famed Heritage course in a golf tournament to mark the occasion. 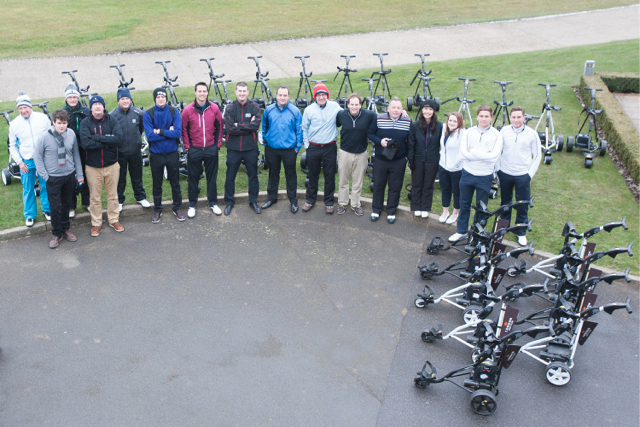 PowaKaddy first started life in April 1983 when, out of frustration at having to carry his clubs around the course, mechanical engineer, Joe Catford took it upon himself to invent the world’s first powered golf trolley. When local businessman, John Martin came across Catford using his prototype he instantly saw the potential and invested in the company. Just three months later as Tom Watson strode to Open Championship glory at Royal Birkdale, the PK Classic was officially launched to the public in the tented village. This historic moment was to forever change the face of the game, giving ageing and injured golfers a new lease of life with a stress-free and enjoyable means of transporting their clubs around the course.

Over the ensuing years PowaKaddy has continued to push the boundaries of technology as well as changing the perception of electric trolleys amongst the younger generation by advocating the obvious health, fitness and game-improvement benefits. Delivering award-winning products year-on-year and ultimately enhancing the enjoyment of the game for golfers all around the world is what the company has become synonymous with. From ingenious never-seen-before folding frames and high-performance Lithium Batteries to market-leading Cart Bags and array of essential Accessories, PowaKaddy has been at the forefront of many an industry-changing innovation. Flagship designs such as the Rio, Legend, Freeway, PK Touch, Freeway Digital and PK SPORT have become instrumental products of their generation and have each continued to raise the bar of electric trolley performance

Following a change of ownership in August 2012, David Catford is back at the helm of PowaKaddy alongside John deGraft-Johnson, his business partner from the company’s most successful era. With the recent launch of the new Freeway Family both are buoyed about the future of brand, but equally keen to reflect on 30 years of what has become one of golf’s true iconic brands.

“The past few days have been incredibly special for the entire PowaKaddy team and we are delighted that so many of our industry partners and colleagues have been able to join us to mark this momentous occasion,” commented deGraft-Johnson. “PowaKaddy has been built on delivering reliability, quality, functionality, innovative technologies and performance across the board and I am incredibly proud to have been part of the journey that sees us where we are today. We have introduced some truly game-changing innovations and no more is this evident than in our new Freeway Family, which honours the famous Freeway marque that has played such a key part of our success over the years.”

First unveiled in March 1999, this ground-breaking design incorporated  simplicity and ease of folding along with robust and contemporary styling and electrics. The first model in the Freeway franchise went on to sell an incredible 385,000 plus units. Fourteen years on, the 2013 Freeway family looks to   build on this reputation with its enhanced sports construction and features born out of half-a-century experience in the market. The range encompasses a stylish new Freeway model, an enhanced Freeway Digital+ and the new Freeway SPORT. The latter has seen the critically-acclaimed PK SPORT model rebranded to spearhead the all-encompassing new range, which looks set to strengthen the brand’s position as the leader in the electric golf trolley market. With unerring reliability, robust performance and sporty design features resonating throughout, the Freeway Family offers outstanding value throughout. All three models are now available to purchase at selected retailers up and down the country.

For further information on the PK Freeway Family and all other products in the 2013 range visit www.PowaKaddy.com