Following the hugely successful Abu Dhabi Championship which was won by Jamie Donaldson last week, Abu Dhabi has announce a large growth in the number of  golfers playing it's flagship courses 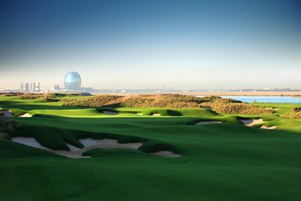 Some 13,171 overseas rounds were played at Abu Dhabi’s triumvirate of world-class last year – a near two-fold increase on the 6,769 overseas rounds tallied at the same facilities a year earlier. The number of overseas rounds played reached 5,664 – or 43% of the total number played in 2012 - were booked via international tour operators, with 5,795 - or 44% - coming through hotel reservations and the remaining 1,712 – or 13% - generated through ‘walk-ins’.

“These numbers reflect what we always knew about Abu Dhabi’s world-class golf tourism proposition: capture the world’s attention, make it simple and more affordable for them to come and play - and that is exactly what they will do,” said Faisal Al Sheikh, Events Manager, TCA Abu Dhabi.

“Our golf tourism sector is not simply growing, it is positively thriving. With Golf in Abu Dhabi streamlining the entire booking process, the destination’s appeal to the international golf tourism sector has also been considerably strengthened by recent openings of luxury accommodation properties on the fringes of our diverse course offerings.”

The figures also reveal that November (3,005), February (1,942), December (1,793), March (1,494) and January (1,442) were the most popular months for overseas rounds bookings – highlighting the emirate’s capacity to attract golf tourists from Europe during the continent’s winter months.

With a globe-trotting promotional campaign also helping position the emirate in the minds of international golf tourists, Chris White, General Manager at Yas Links, praised the collective approach of ‘Golf in Abu Dhabi’.

“When various stakeholders came together as one destination and aligned shared objectives, our participation in trade shows such as World Travel Market and Golf Travel Market stimulated increased interest from traditional markets and unearthed untapped regions, such as Brazil,” said White. “Abu Dhabi has all the ingredients for golf tourism growth – from significantly increased and affordable hotel stock, to Etihad Airways, our nation carrier, aggressively taking greater market share in key source markets.”

“Abu Dhabi’s potential is unbelievable and it’s an exciting time for golf in Abu Dhabi,” said Card, a fully-qualified member of the PGA of America and the PGA of Great Britain. “As the destination continues to grow on the international arena, we will ensure our guests and industry partners experience the highest levels of service and quality because it is at the very heart of Abu Dhabi’s unique hospitality proposition.”

The emirate’s international pulling power has also been given a boost with the news Italy’s Matteo Manassero - the first teenager in history to record three PGA European Tour titles and a prodigy widely-tipped as the next Rory McIlroy - has signed a three-year extension to his global golf ambassador role with TCA Abu Dhabi. The new deal, which will see 19-year-old Manassero work worldwide to boost the emirate’s international reputation as a leading golf tourism destination, includes ‘Golf in Abu Dhabi’ branding on a prominent position on the youngster’s cap.

“Signing the extension was easy for me because Abu Dhabi has become my second home,” said Manassero. “I won my third title in Singapore after a short holiday here in November. I put that down to being relaxed, refreshed and having the opportunity to practice on fantastic courses and in warm weather when the rest of the world is freezing. Being an ambassador for Abu Dhabi isn’t difficult; it’s very easy to explain why I love this place. Hopefully more of my fellow professionals, as well as amateur players all over the world, are starting to understand that the conditions here are not just great – they are the best.”

For more information, or to place bookings, visit www.golfinabudhabi.com or email [email protected]