The European Tour has announced that the Volvo World Match play will from 2013 be played at a rotation of courses starting in Bulgaria at the Gary Player designed Thracian Cliffs. 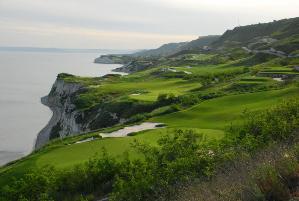 in Bulgaria. Framed by rugged coastal cliffs and the vast blue of the Black Sea, which can be viewed from each and every hole, Thracian Cliffs is arguably one of the most dramatic golf courses on earth. Gary Player once commented, "You will not find a golf course like this anywhere else on the planet." Underlining the unique features of this new venue, the Thracian Cliffs has also been called the ‘Pebble Beach of Europe’.

The Championship has evolved considerably since moving from Wentworth in 2009, successfully securing a world-class field by qualification on merit, increasing the field to 24 players and revising the format.  The qualified players are divided into eight groups of three players to be played out on Thursday and Friday with 16 players progressing to Saturday’s knock-out stage with the semi-finals and final played on Sunday.

Bulgaria’s Prime Minister, Mr Boyko Borissov, in announcing his Government’s support commented, “This is a real coup for Bulgaria being chosen to host such a prestigious international tournament with a rich heritage and sporting traditions. The vast media coverage will deliver a reputable boost for Bulgaria and our tourism industry. The recent growth of golf in our country will have the opportunity to be showcased around the world.”

He added, “Volvo is setting a wonderful example to other international companies, as this shows they view Eastern Europe and Bulgaria as an area of interest for their future business development. I am looking forward to welcoming the world's best golfers and the successful staging of the tournament will only enhance Bulgaria in becoming recognized as one of the established golfing destinations around the world".

Guy Kinnings, Global Co-Managing Director IMG added, “We are very grateful to the Bulgarian Government for their support and all the work the Bulgarian Golf Association has done to make this possible. The Volvo World Match Play Championship was founded in the same year as IMG and now, more than 50 years on, we are delighted that, with the help of our partners, Volvo, this historic Championship continues to ‘trail-blaze,’ going to new venues as was McCormack’s vision back in 1964.”

Kinnings continued, "In the last decade, IMG's business interests in Eastern Europe, and Bulgaria in particular, have really developed and bringing such a globally significant tournament to the region was always our ambition. The decision to rotate the Championship around different countries in the future is another innovative move which allows the event to remain fresh annually. While these future venues are yet to be announced, it is no secret that we are considering Northern Europe, including the UK, as a possible future destination."

Krassimir Guergov, Chairman of the Bulgarian Golf Association, commented, “This is just the most amazing news and I am delighted that Bulgaria has been able to demonstrate its credentials to Volvo, IMG and the European Tour in order to make this happen. We will now concentrate on helping IMG and Volvo deliver a world class Championship that will showcase Thracian Cliffs and Bulgaria.”

Defending Champion and member of the successful 2012 Ryder Cup Team, Nicolas Colsaerts, on hearing the news said, “This just demonstrates the global appeal of golf and the innovative approach that Volvo and IMG show time after time. I’ve never been to Bulgaria but I’ve heard great things about the country and Thracian Cliffs and I can’t wait to defend my title there in May next year. Having won both the 2011 Volvo China Open and the 2012 Volvo World Match Play Championship, I think Volvo might be my lucky charm so I hope that continues to be the case in 2013