Steven Moores and Andy Allen came out on top in the betterball grand final. The Crompton & Royton duo beat off 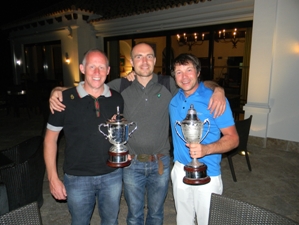 competition from hundreds of pairs to win the coveted title at the stunning resort in Andalusia. They initially won five local qualifying rounds before winning two more during the regional final, played at Formby Golf Club earlier in the month, where they qualified for the all-expenses paid trip.

To complete their triumph they won a close semi-final contest at the second hole of a sudden-death play-off before overcoming the 2010 champions, Ben Ryland & Ashley Ibbotson from Wheatley Golf Club, in the final.

The final itself was no less dramatic than their extra holes victory in the previous day’s semi-final. The tie was all-square with four holes to play and looked like it could go either way, but Allen (3 hcp) had other ideas and produced three world class shots to take the trophy back to Lancashire.

First he produced a fabulous bunker shot at the short 15th to win the hole when it looked more likely they would lose it. Then he produced probably the shot of the championship when he took on the water at the par-five 16th and zoned a hybrid in to less than twenty-feet to set up another win. And it was all over at the next when he fired his approach from 200 yards to within a matter of inches to seal the title.

Fiver-handicapper Moores, who played some exceptional golf himself during the week, said afterwards, “Andy certainly turned the after burners on for the last three holes.”

Meanwhile in the individual event Michael Horsfall, from De Vere Oulton Hall Golf Club, became the third player from Yorkshire to win the singles title. Following the inauguration of the competition three years ago the coveted trophy has never left the White Rose county.

Horsfall looked as though he might miss out when he found himself trailing by three holes mid-way through his semi-final clash. After ten holes he was on the ropes but battled back to lead going into the final hole only for his opponent to drain a 25 foot putt on the final green and force the game into extra time. The Leeds man eventually triumphed at the second play-off hole.

The final wasn’t as close and ended with a 5&4 victory for Horsfall against Northumberland’s John Mather (3 hcp). The 12-handicapper still had to come from behind early on, the turning point coming when he fired his approach from the trees close on the 7th to win the hole when he seemed to be heading two-down.

The season-long competition is sponsored by Golfdelaluz.com, an expert holiday company specialising in golf breaks to the Costa de la Luz & Seville in Spain and the Lisbon & Algarve regions of Portugal, with over 1,000 players starting out in the event.

Edward Battye, the tournament organiser, said, “It was breath-taking to watch the climax of the pairs final. The golf played from Andy over the last three holes would have stood up at any standard of the game. It was truly sensational and deservedly won the title. And Mike was a worthy winner too. He looked out of the event when he was three-down in his semi-final but produced an excellent comeback and then played some terrific golf in the final.”

He added, “It was a fitting finale to the competition and the experience that the finalists enjoyed during the overseas grand final will not be forgotten, it was a truly memorable week for them provided by our title sponsor Golf de la Luz.”