As darkness claimed the day on the evening of the 24th of August a team or hardened golfers stood weary, but triumphant after completing their version of 'The Longest Day'. The aim was to play 72 holes in a day and raise £10'000 for charity. We salute you Teeofftimes.co.uk. This is their story:

In a remake of the 1962 epic depicting the D-Day landings, the all-star cast of Teeofftimes.co.uk took to the fairways of Harleyford Golf Club on 24th August. ‘That’s not the longest day’ you may say, but just like the Normandy landings 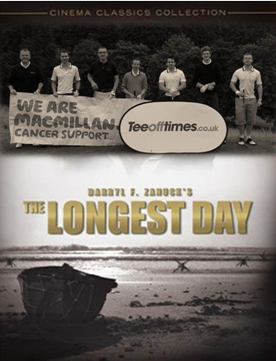 themselves, there had been failed attempts earlier in the year as conditions needed to be just right for the deployment of this expeditious task force. The Objective: Four rounds in a day to raise £10,000 for MacMillan Cancer Support.

Preparations were meticulous. Time check: H hour was 0615 and not a second later if the team were to make inroads into the Buckinghamshire countryside in a timely fashion. That would allow 14 hours to complete the challenge before sunset; 3 hours a round, 12 minutes a hole, 30 minutes rest between rounds – easy. The first round was completed at lightening pace, Messrs Hemsworth, Barker and Smith performing admirably as the vanguard stepped off the 18th green a mere 2 hours 40 mins after the first shot was fired.

Logistics were key and no battle is won without timely supplies to the front line. Cereal bars, Gatorade and an enormous bag of walnuts fuelled the brave warriors as the second wave started at 9am, without pause for scores or comfort break. Baffled looking locals gaped in amazement as the two fastest groups in Harleyford’s history strode out through the no man’s land of thick rough that punished any poorly directed advance. The more accurate benefited from kinder conditions underfoot, smooth fairways and true greens offering little resistance.

Back in command headquarters, the clubhouse terrace, intelligence was looking suspect. Questions were being raised about how Col Saunders could have completed the 2nd round with 38 points in just 2 hours 45 minutes. Then a more pressing issue. During the vital replenishment of burgers and chips, it rapidly became apparent there had been a counter offensive by the enemy - blisters, everywhere. There was no time, war wounds were afforded nothing more than compeed, a fresh pair of socks, then back to the front, the muscular Major Manson suddenly diminished to the gait of Keyser Söze.

Ahead of schedule the third offensive started at 1300. The hot debrief had identified some important lessons. Etiquette was futile if the objective was to be achieved, and the terrain was more undulating than anticipated, tactical placing of clubs was an advantage, comfortable footwear essential. The rapidity of progress in round three was in keeping with the morning advances, but suddenly the whole task force ground to a halt. Seniors morning, and no possible way though. Even the might of Brigadier Ilbery staring them down on the tee of the 120 yard Chalkpit with utility club in hand couldn’t move them. This was a sturdy defence and the only option was to sit tight and try to make up ground in the final phase.

The troops were weary. The last offensive had taken its toll, but a rapid refuel and the jubilant gaiety of Captain Clements lifted sprits as team TOT shouldered arms for the final push. Accuracy was starting to wane with tired limbs and fatigue levels going down with the setting sun. But our boys had the bulldog spirit, and with a fair wind and following seas the back nine was suddenly upon them and the end was in sight. Homeward bound for tea and medals

As the final putt was sunk on the 18th green, handshakes all round. Our brave soldiers had conquered all 72 holes in 13 hours and in no time their efforts paled into insignificance. The challenge was fun, the golf was average, the blisters painful, but the fundraising was the main objective. We’d done something small and hopefully helped MacMillan continue the incredible work they do every day in support of cancer sufferers across the UK.

Our thanks go to Harleyford Golf Club for the excellent hospitality and their welcoming members for excusing our etiquette. You can still donate to MacMillan in support of their heroics at http://www.justgiving.com/teeofftimes