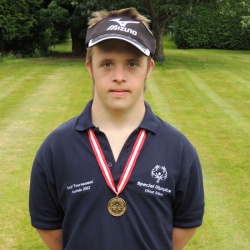 The 25-year-old from West Byfleet Golf Club - who is supported by the Surrey Golf Partnership - won his gold medal when he travelled with the Special Olympics GB team to the European Golf Cup in Austria.

“I had such a great time at this competition,” exclaimed Mikael (pictured left). “I had fun representing my country and everyone was so nice. I met a lot of new friends!”

Now Mikael, who has Downs Syndrome, has been chosen to represent Special Olympics Surrey as part of the South East team for golf at the Special Olympics National Summer Games 2013 – that’s after he takes part in the downhill skiing at the World Winter Games for Special Olympics in South Korea in January 2013.

Mikael’s golfing ambitions have been supported by the Surrey Golf Partnership, which works to grow the game in the county. He trains regularly with club professional Jonathan Field at West Byfleet Golf Club and the Partnership has also put him in touch with Richard Harrison at Roehampton, who is a specialist in disability coaching.

Richard spoke to Mikael just after his gold medal win and commented; “I don’t think I have heard a more joyous and proud golfer in my life. His attitude, approach to learning, temperament and good humour have been a pleasure to work with.”

Mikael has also had a few tips from the top! On a visit to the recent BMW PGA Championship at Wentworth, Mikael received putting tips from none-other than Padraig Harrington, Special Olympics Global Ambassador for Golf. Special Olympics Great Britain provides grassroots sports training and competition programmes for children and adults with intellectual disabilities.

Elsie Undrom, Mikael’s mother, credits sport with helping her son to blossom and developing his self-confidence. She also paid tribute to the Surrey Golf Partnership and West Byfleet Golf Club: “They have been so positive towards him, they have taken a special interest in developing him, it’s been wonderful.”

Mikael also plays football for Fulham Badgers, a Downs Syndrome team, and went on tour with them to Hong Kong 2010; he recently medalled at Downs Syndrome Association athletics competitions in Mexico, Italy and the Azores.