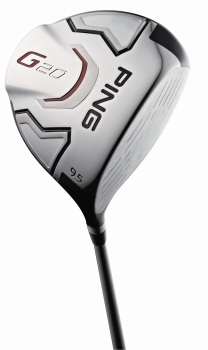 On the strength of tour players’ enthusiasm for the new G20 family and Anser Milled putters, PING introduces several new products that build on the company’s reputation for performance, innovation and fitting.

“It is very satisfying to witness tour players’ excitement for the G20 family and the Anser Milled putters,” said John A. Solheim, PING Chairman & CEO. “Tour validation is an important seal of approval and the G20 products and Anser Milled models are in high demand by the game’s best players. At the recent Open Championship, the G20 driver was our most popular model, with nine being used. We also had several Anser Milled putters in play.

“There’s a lot of new technology in the entire G20 family,” added Solheim. “Our engineers optimised the clubs to fit and benefit golfers of all skill levels.  In the driver, we’re using for the first time a titanium alloy called Ti 8-1-1, which allows us to improve the weighting to better optimise the entire clubhead. When combined with our new, proprietary high-balance-point shaft, our testing shows significant improvements in energy transfer, which leads to longer, straighter drives. The irons are more forgiving and feature a cavity design that includes an elastomer badge for improved feel. The fairway woods and hybrids offer golfers high-launching, forgiving options from all conditions.”

For all ability levels, the external weighting of the large, forgiving G20 driver helps launch the ball high with low spin for maximum distance and accuracy by optimising the CG location. PING’s proprietary high-balance-point TFC 169D shaft enables the golfer to swing a clubhead with more mass at the same speed, creating a higher MOI and generating faster ball speeds for long, straight drives. A large, variable-thickness face generates faster ball speeds and increases MOI across the hitting surface for power and forgiveness. The 460cc clubhead is made from Ti 8-1-1, a lighter, lower-density alloy. Ti 8-1-1’s high strength-to-weight ratio allowed for additional weight to be strategically placed, increasing the MOI on both the vertical and horizontal axes.