Why Has The PGA Tour Released Players For The Saudi International

THE Saudi International is being staged at Royal Greens Golf and Country Club from February 2-5. It is a tournament that has consistently divided opinion, even before the arrival of LIV Golf, with many of the golfers who have taken part being criticised for doing so.

The Saudis have, of course, financed LIV Golf, but continue to be challenged over their human rights record. PGA Tour players who chose to accept the Saudi dollar were immediately banned by the tour.

So make of this what you will - the PGA Tour is granting releases to a number of players to take part in this year’s tournament. Golfweek has reported that these players include Cameron Young, Lucas Herbert and Cameron Champ.

To put it mildly, this is a somewhat baffling decision. Especially as the AT&T Pebble Beach Pro-Am is being played at the same time. And this is a tournament that suffered in 2022 because a number of top professionals opted to play in Saudi Arabia instead of heading to California.

It was first staged in 2019, when it was won by Dustin Johnson, who repeated the feat in 2021 and finished runner-up to Graeme McDowell in 2020. From 2019 until 2021 it was a European Tour event, but it is now regarded as the flagship event of the Asian Tour.

What I simply cannot get my head around is why the PGA Tour would allow any of its members to take part this year. And there will also be DP World Tour golfers in the field. 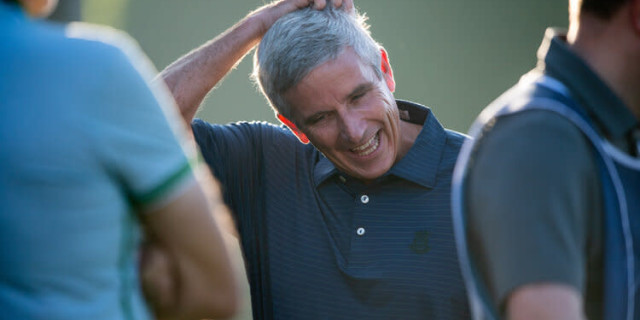 The Saudi International is run by the same people who fund LIV Golf and they were quick to announce that Cameron Smith, their most high-profile recruit, will be playing, alongside defending champion Harold Varner III.

Smith won five times in 2022, at the Tournament of Champions, Players Championship, Open Championship, Australian PGA and on only his second start with LIV Golf.

You may remember Varner III holing an outrageous 90-foot putt on the final green to win the Saudi International 12 months ago. It was a moment of pure drama.

Varner will be back to defend his title at what is certain to be a hugely controversial tournament. Varner is one of those who now competes on the LIV Golf circuit and is no longer eligible to play on the PGA Tour.

During its short history the Saudi International has always been an event that has sparked debate, with players being paid huge sums to compete.

Many of the golfers who made the move to LIV said they were doing so because it gave them the opportunity to spend more time with their families, At least Varner was brutally honest, admitting that he had done it for the money.

He wrote: “The opportunity to join LIV Golf is simply too good of a financial breakthrough for me to pass by. I know what it means to grow up without much. This money is going to ensure that my kid and future Varners will have a solid base to start - and a life I could only dream of growing up.

“Your opinion of me may have changed because of this announcement. No lie, that’ll be a tough thing to deal with. But I haven’t changed - I’m still me. I promise you that.”

He won a lot of friends for his honesty, and also said he would be using the money to help build his foundation.