THE QBE Shootout brings the curtain down on an eventful year for the PGA Tour, with 12 two-person teams competing at Tiburon Golf Club at The Ritz-Carlton Golf Resort in Naples, Florida.

The 34th edition of the QBE Shootout and 22nd in Naples will feature 10 new teams competing for the $3.8 million purse.

One of the familiar teams returning includes Harris English and Matt Kuchar, a pairing that has accumulated six top-five finishes, including three wins, since joining forces in 2013. Max Homa and Kevin Kisner, who finished fifth last year, will be together for the second time.

For the first time in tournament history, two LPGA players will be competing. Nelly Korda, playing in her first QBE Shootout, will be paired with Denny McCarthy. Lexi Thompson, returns for the sixth time and will join Maverick McNealy.

The QBE Shootout will once again feature a scramble format during the first round, a modified alternate shot format on Saturday and a final-round better ball on Sunday.

“We are thrilled with the 12 compelling teams we’ve been able to put together this year.  These dynamic duos comprised of young guns, recent Tour winners, LPGA stars and established veterans are sure to create an exciting three days of competition,” Tournament Director Rob Hartman said. 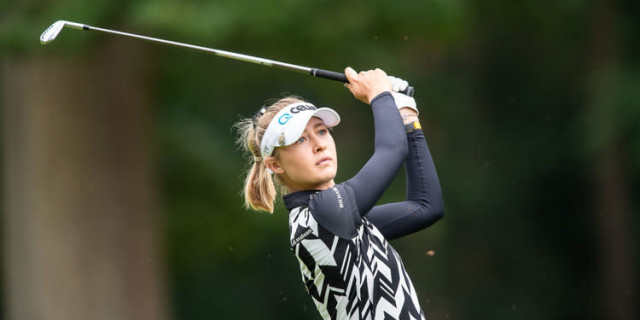 This year’s tournament will have a special mission as tournament organisers, sponsors, volunteers and fans collectively assist to rebuild the local community in the wake of Hurricane Ian. In addition to the QBE Shootout’s traditional giving, all proceeds from QBE Shootout ticket sales will benefit local hurricane relief efforts.

CureSearch for Children’s Cancer will continue to be the tournament’s primary charitable beneficiary. Since 1989, the Shootout has raised more than $15 million for charitable causes.

English and Kuchar will start this fun event as favourites. They have won it three times and also finished second on two occasions.

It is easy to dismiss these tournaments as simply an opportunity for a number of golfers to fill their wheelbarrows with cash in the run-up to Christmas, but this event raises a lot of money for charity and should be applauded for giving some of the game’s best women golfers the opportunity to tee it up on level terms with their male counterparts.