THE DP World Tour completes its Spanish Swing at the Mallorca Open at Son Muntaner Golf Club in Palma.

There is a strong Spanish presence. Apart from Cabrera Bello, Nacho Elvira, Adrian Otaegui, Seb Garcia and Alejandro Canizares will all be hoping to put on a show for the home fans.

Last year the tournament was won by Denmark’s Jeff Winther in what was his maiden DP World Tour success. And he is back to defend his title.

He posted rounds of 62 on days one and three, sandwiching a 71 in tough conditions on thhe Friday, and while the wind returned to Golf Santa Ponsa for the final 18 holes, Winther kept his cool.

The 34-year-old recorded a closing 70 to stay at 15 under and win by one shot from home favourites Pep Angles and Jorge Campillo and Swede Sebastian Soderberg - who finished second for the second week in a row.

Winther carded three 62s on Spanish islands last year and clearly loves this part of the world. He has actually shot five of his eight lowest competitive rounds in Spain and the Balearic Islands will now forever loom large in his career as the place where he claimed his maiden win.

A 2015 European Challenge Tour graduate who came through the Qualifying School in 2016, 2017 and 2018, he rose to 37th in the Race to Dubai standings, as well as into the top 200 on the Official World Golf Ranking for the first time.

Winther had his family with him in Spain and he revealed that his six-year-old daughter Nora played a big part in his victory - by getting him released from the bathroom on Sunday morning.

"After breakfast I went to have a shower and my wife came in to use the bathroom as well," he said. "The door closed, and there's no lock, but we locked ourselves in. There's no lock on the door but the handle didn't work.

"Our little girl Nora, who is six years old, had to go and find guys at reception to break down the door. We were in there for 45 minutes. I thought, ‘Jeez not today, not Sunday, you're leading the freaking event. Might not get there for your tee time'. What a morning." 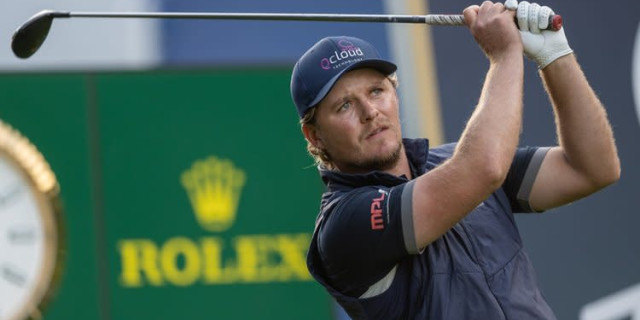 Son Muntaner Golf Club is a par 71, measuring 6,952 yards. It may be short by today’s standards but the fairways are pretty narrow, the greens are undulating and the bunkers are well-placed and can be really punishing.

Ryan Fox. Having the year of his life

Nicolai Hojgaard. Due a big week

Eddie Pepperell. After a miserable run, the Englishman is finally turning things around