This is definitely the book for you If you've ever wondered about any of the following:

Having recently reviewed the Long Golden Afternoon by Stephen Proctor this is the perfect accompanying book.

Both provide an important perspective in golfing history but together they offer the northern and southern direction of travel and why.

The Great English Golf Boom 1864 to 1914: A History by Dr Michael B Morrison is a stunning, academic quality book answering this and many other questions.

The image used on the cover is from Punch magazine in 1885 called ‘The Golf Stream’ indicating the number of people travelling to engage in the sport of golf. His research and analysis, using a range of data sources, is simply exemplary.

He has reviewed how the development of golf differed between England and Scotland. The spread of golf in England lagged Scotland by several decades. An important catalyst was when English holidaymakers travelled to Scotland and saw golf being played for the first time.

This took time to happen but when it took off, it was a great boom rather than just a passing fad or fashion.

I have always had the idea that the growth of golf as a sport mirrored the growth of railway lines giving access to the links land between the sea and agricultural land.

These were part of the social and economic factors that influenced the spread, however the author has drilled much deeper into the makeup of the clubs and the golfers’ professions and discovered that many clubs were formed around a particular locality and even specific professions. 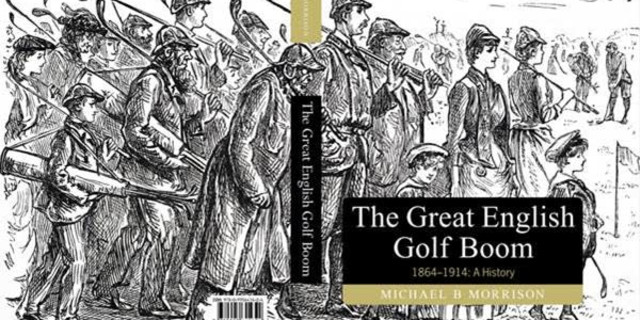 He has looked into the type of golf clubs and their locations and discovered that many were operating on a small scale with 9-hole parkland layouts charging a guinea per annum membership fee.

Many were created by local club professionals, simply laid out on the available land area. The ones created by the acknowledged professional golf course architects were at the elite clubs that were developing around this time.

I learnt that the bicycle and the increase in leisure time was in fact one of the major influencers on the growth of the game. Most clubs had bicycle racks and going golfing by cycle for the masses was a popular activity.

I found that the rate of golf course construction was surprising. In 1886 six clubs were formed in England. By 1891, just five years later 71 were formed in that year. That’s a new golf club being created every five days!

Interestingly, many of the golf courses were very short by today’s standards allowing for the carry of the gutta percha golf ball. Tom Dunn’s original layout for Huddersfield measured at 4,716 yards.

I have learnt an extraordinary amount about English golf through this book and have found reading it to be a real pleasure.

I anticipate, as I continue my research into the history of golf, that I will be returning to it on a regular basis. It undoubtedly will become a reference work for the future.

It is beautifully illustrated with images, charts and maps. It is provided in hardback form and colour. This is a self-published book and copies can be bought from the author directly using this email address ([email protected]) for a price of £29.50 including postage and packing.

The Links on the Hills, a history of the Old Course at the Gog Magog, 2015

The Worst Golf Course Ever, a history of the Cambridge University Golf Club, 2016

The Origins of the Sacred Nine, Royal Worlington and Newmarket Golf Club, 125th Anniversary, 2018 (awarded the British Golf Collectors Society Murdoch Medal for 2018 for outstanding contribution to the heritage of golf)