Rory McIlroy Player Profile And What's In The Bag

RORY McILROY produced a sensational final round of 62 to retain the Canadian Open title he won in 2019. It was his first victory of the year and the timing could not have been better, with the US Open at Brookline starting on Thursday.

The Northern Irishman finished the week on 261, 19 under par, beating Tony Finau by two strokes, with Justin Thomas finishing in third place.

On a day of incredible scoring, Justin Rose finished five shots behind McIlroy in joint fourth after a bogey at the last when needing a birdie for a record-equalling 58.

"This is a day I'll remember for a long, long time. It's my 21st PGA Tour win," said McIlroy to a backdrop of raucous cheers.

"I think after Covid and everything, I just needed a complete reset and sort of rededicated myself to the game a little bit and realised what made me happy, and this makes me happy."

McIlroy had shared the overnight lead on 11 under at St George's Golf & Country Club in Toronto alongside American Finau.

He had two bogeys on the back nine as Justin Thomas threatened to challenge, but a total of 10 birdies was enough to secure his first victory since the CJ Cup. 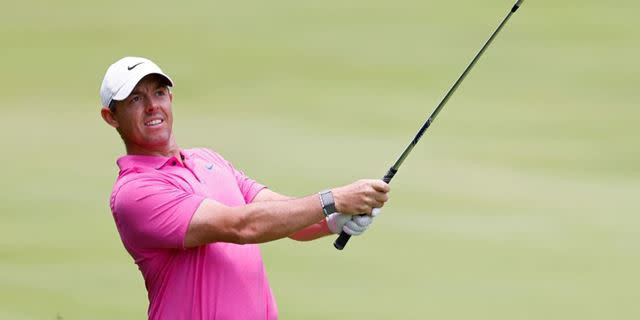 McIlroy said: "It's incredible, playing with Tony and Justin Thomas - two of the top players in the world, all of us playing the way we did. I think the worst score in the group was six under par.

"It was pretty entertaining being part of it - the crowd, the calibre of play, everything about today was first class, which this tour is.

"It's the best tour in the world with the best talent. It feels really good to go out there and beat someone like JT, who is one of the best players I have ever played with."

Who Is Rory McIlroy?

McIlroy is a four-time major winner but his last one came in 2014. His victory in Canada was his 33rd success and took his season’s earnings to $6.5m. He has won 21 times on the PGA Tour and 12 on the DP World Tour. His first professional victory came at the Dubai Desert Classic in 2009 when he was just 19 years old.