KRISTOFFER BROBERG returns to Bernardus Golf in Cromvoirt for the Dutch Open, a tournament he won in highly emotional circumstances last year. And the Swede will be looking to draw on some positive memories.

His victory was his first since 2015 and he said that he had been through "six years of hell” after producing a battling 72 on the final day to hold off the chasing pack. He had gone into the final round with an eight-shot lead after a brilliant 61 in the third round but found himself just two clear with two holes remaining after a back nine that included two bogeys.

But he held his nerve to close out a three-shot win - his first on the European Tour since he secured his maiden title at the 2015 BMW Masters. Broberg endured a bumpy ride since then, with hip and knee injuries contributing to him playing just 11 events between 2018 and 2020.

And he could not hold back the tears after his win.

Broberg said: "It feels good, I broke down on 18 but it's been six years of hell. Three different surgeries on my left side but now I'm starting to get back where I'm supposed to be.

"The first few days I played really good. Today I was struggling like I was in the off-season. I thought my eight-shot lead would be enough today, but Matthias (Schmid) played some really beautiful golf.

"It's been a nightmare over the past six years. I was so close to quitting, it's been so...I don't know the word for it, but it's been a tough time. This is way bigger than my last win, with much more emotions.

“It's a game-changer. I'll get into bigger events and can plan my schedule a little bit. Before this, I was at home for a month. I didn't know where my game was, but it was good enough."

Germany's Matthias Schmid finished alone in second place on 20 under after posting a closing 66, while Alejandro Canizares was two shots further back in third. 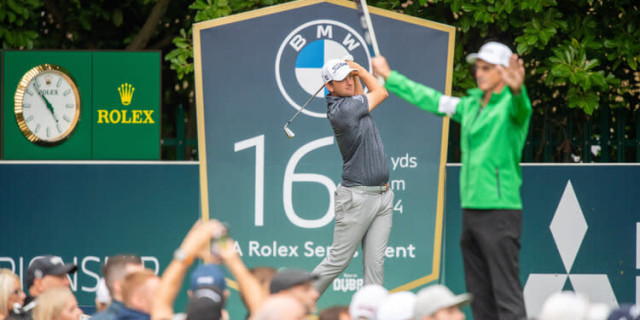 Olesen knows only too well what Broberg went through after his own struggles. He played for Europe at the 2018 Ryder Cup but then saw his life fall apart.

But after finishing in a tie for 12th place at the Qatar Masters, he finally landed his sixth DP World Tour title when he landed the British Masters at The Belfry earlier this month. Olesen will be playing in the Dutch Open for the first time since 2015.

It is proof, if ever it were needed, of just how quickly things can turn around.

Just ask Cabrera Bello. The Spaniard was riding high in the world rankings when he won the Scottish Open in 2017 but as he struggled to juggle life between Europe and the PGA Tour his game fell apart until he won the Spanish Open in October and then followed in with a joint second at the Abu Dhabi Championship in January.

The Dutch Open is one of the oldest tournaments on the schedule and the home fans would love to see one of their own pick up the trophy. Despite a mediocre season, Joost Luiten probably represents the best chance of that happening. Luiten is a six-time winner but he would be the first to admit that his recent form has been pretty miserable, other than a tie for 10th at the Steyn City Championship in South Africa.

Bernardus Golf is a par 72 measuring 7,425 yards. It is a heathland course designed by Kyle Phillips and features gorse, dunes and several water hazards.

Thomas Pieters won the Abu Dhabi Championship, and finished tied 12th at the Dubai Desert Classic and tied ninth at the Soudal Open - and is a previous winner of the Dutch Open. Bernd Wiesberger is an eight-time winner on the DP World Tour and enjoyed a top-10 finish at the recent Catalunya Championship. He is a wonderful ball striker and his game is made for this course.

Bernd Wiesberger. Due another victory

Rafa Cabrera Bello. Back to his best at last

Thomas Pieters. Loves this part of the world

Bernd Wiesberger. Finds lots of fairways - a key to playing this course

Joost Luiten. Dutch fans will be willing him on