The 2021 Under Armour footwear range has been revealed, with its headline product already receiving the highly coveted award of ‘Best Spiked Golf Shoe’ from Mygolfspy.com. Under Armour have been consistent with their footwear releases, debuting in 2016, and this year is no different as they continue to follow the data in their quest to produce the most comfortable footwear on the market.

Through the science of biomechanics, in addition to working with world leading bio mechanist Jean-Jacques Rivet, this year’s release promises to be the best yet as the company intend to improve their proven traction system. The footwear line was in action at the 2021 Masters, with Jordan Spieth showcasing the improvements.

Under Armour have continued to grow within the footwear market and after the Rotational Resistance Traction in 2016 and the creation of both Horizontal and Vertical Traction systems in 2019, the new 2021 range ensures it utilises its full use of cutting-edge technology. 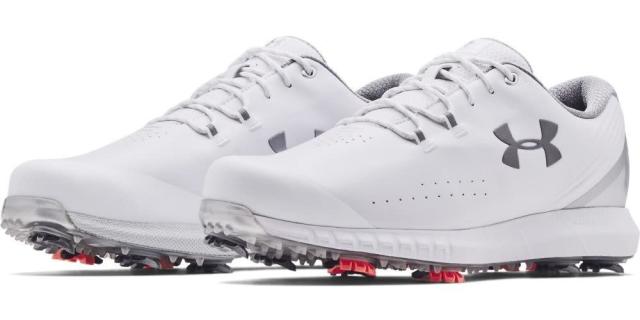 The HOVR Drive leads the shoe line with comfort at its forefront. The shoe employs Under Armour’s proprietary HOVR cushioning – which was developed to overcome the limitations of standard EVA cushioning. The HOVR technology placement supports natural movement of the foot during the swing yet provides a ‘minimal gravity feel’ to maintain energy throughout the action.

Under Armour have introduced new, lower profile Rotational Resistance (RST 2.0) spikes for lockdown horizontal traction and ultimate comfort. The shoe holds a lightweight, durable TPU outsole and with a weight of 12.2 oz, it is clear that comfort is something Under Armour value exponentially. 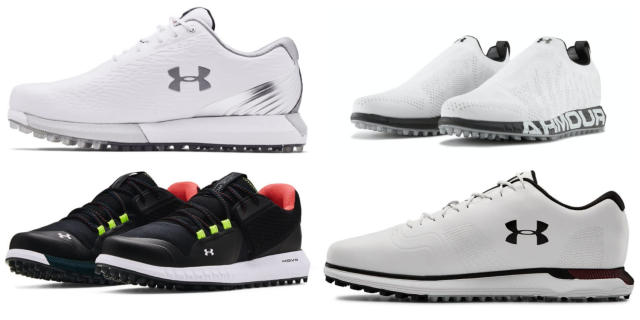 Whilst the HOVR Drive spearheads the catalogue, there are several additions to ensure that regardless of budget, every golfer is considered. The HOVR Show SL (£130) has been afforded an updated vision for 2021 with an addition of a new Mod Grey colourway. The brand new HOVR Knit (£115) features a full knot textile upper that provides an incredible sock like fit, ensuring reliability during even the harshest of weather.

The new HOVR Forge RC SL (£105) lends a stylistic nod to the brands’ heritage and its original Charge RC running shoe. The already established and extremely popular HOVR Fade SL (£90) has been warranted two more colourways, now available in both Mod Grey and Academy for 2021. Under Armour have also launched two new models into the market, the tech-laden spiked Charged Draw RST (£90) and the spikeless Charged Draw Sport SL (£85). Both shoes offer golfers market-leading technology at less than £100.

What Under Armour Say:

David Stakel, the Senior Director of Compete Footwear at Under Armour says: “Under Armour’s HOVR footwear is gold – it is for the golfer that seeks every possible performance and comfort advantage on the course.

“Delivering performance throughout our full range has been paramount to the development of the 2021 range, every shoe for 2021 benefits from Under Armour’s proprietary Rotational Resistance Traction alongside all the bio-mechanical insights we have developed to ensure golf footwear that truly performs."

The shoe line is available for purchase now and for any further developments from Under Armour visit: www.underarmour.co.uk/en-gb/mens/shoes/golf-shoes/.