Masters Betting Preview - How To Pick The Champion

SPRING has finally arrived and that can mean only one thing - Magnolia Lane, azaleas in full bloom, Rae’s Creek and The Masters at Augusta National. Jack Green examines the trends from the past 25 years and picks the players have the best chance of claiming the Green Jacket.

Because of the pandemic, the tournament was staged in November last year, with Dustin Johnson cruising to victory as he finally landed his second major. But now, The Masters is back in its rightful April slot. And the season's first men's major will even be played in front of spectators.

With several of the top contenders in fine form heading into the event, this year’s tournament is wide open. 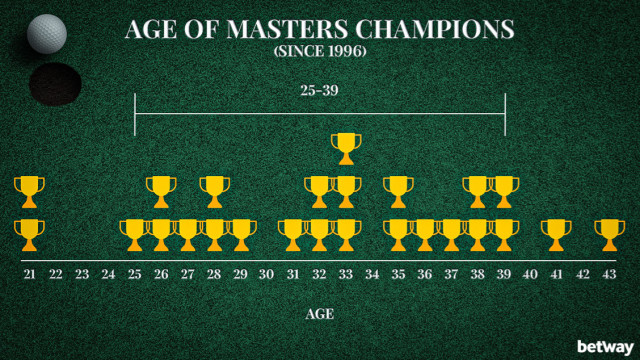 Golf is increasingly a sport where youth and athleticism are huge advantages, but there’s still something to be said for experience at The Masters. Golfers who play at Augusta National for the first time seldom contend.

Young guns such as Viktor Hovland, Matthew Wolff, Collin Morikawa and Cameron Champ all have the game to win but history suggests that the winner at Augusta this time around is more likely to be aged 25 or above.

Lee Westwood will fancy his chances as he arrives at Augusta in great form. He has an excellent Masters record but the odds are heavily stacked against the 48-year-old winning his first major. 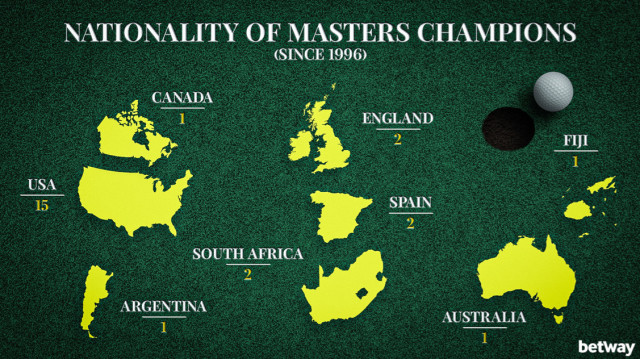 Since 1996, Americans have dominated, winning 15 out of 25. During that period, no other nation has won more than two.

There was a 10-year period between 2008 and 2017 when only four players from the USA won the Green Jacket, but Americans have since taken back control, winning each of the last three.

Most of the main contenders are American, and a home winner seems the likeliest outcome. It’s also likely that this year’s champion will be a player who is inside the top 30 of the world rankings.

There have been a few surprising winners in the past 25 years, including Zach Johnson, Angel Cabrera and Danny Willett in 2007, 2009 and 2016 respectively. Of the past 25 Masters champions, 21 were inside the top 30 in the rankings at the time of their victory, including each of the past 11. 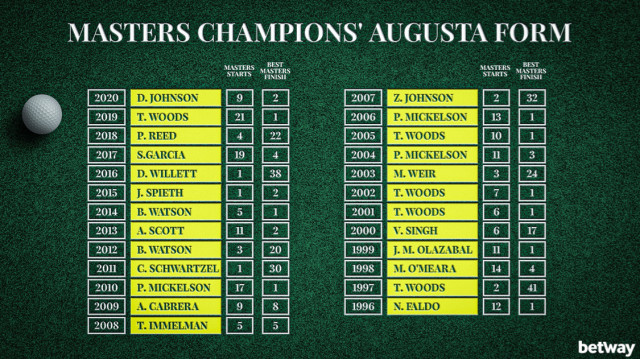 It’s also worth noting that 21 of the past 25 champions had already recorded a top-five finish in the season of their triumph.

This year is unlikely to be an exception, so we are looking for golfers who are in form and have already had success in 2021.

The Masters is the only major that is played at the same venue every year, so it’s possible to establish some course trends to help identify players who have the best chance.

Eighteen of the past 25 champions had made at least four appearances at Augusta. This course is a unique test, and players typically need a few attempts at it before winning their first Green Jacket. Fuzzy Zoeller, the champion in 1979, is the last man to have won on debut.

It’s not enough to have just played at Augusta in the past, though. You need to have played well. Of the past 25 champions, 16 had posted a top-five finish at The Masters before their victory.Since 1996, 19 of the 25 Masters champions made the cut at Augusta the year before winning.

So who fits all of the above criteria?

Dustin Johnson is the reigning champion and has a great chance in 2021. The American is 36 years old, has already won once this year and is ranked No. 1 in the world. With 10 Masters starts to his name he has the course form we’re looking for, too. But history is against him. Only Jack Nicklaus, Tiger Woods and Nick Faldo have successfully defended at Augusta.

Justin Thomas is another strong contender, having won The Players Championship already this year. At 27 years of age, the American fits the profile of a winner and is currently the No. 2 player in the world. Thomas finished fourth at Augusta last year and has made five Masters starts to date. He has also put his early-season woes behind him.

Patrick Reed is a former Masters champion, having slipped on the Green Jacket in 2018. He’s 30 years old, American and ranked seventh in the world, and he won the Farmers Insurance Open in January.

Finally, Webb Simpson is surely a strong contender to add to his 2012 US Open success. He finished 10th at the Masters last year and fifth in 2019, and has made nine career starts at Augusta. The former US Open champion fits the age bracket at 35, and recorded a top-five finish earlier this season at the Sony Open in Hawaii.

For all Masters odds visit Betway