WE look ahead to what we can expect in 2021 when, hopefully, we will see fans allowed back in to cheer on their favourites. As good as the majors were in 2020, without spectators there was a crucial element missing, with glorious shots greeted in absolute silence.  Below we round up when the Majors are and what we hope to see. 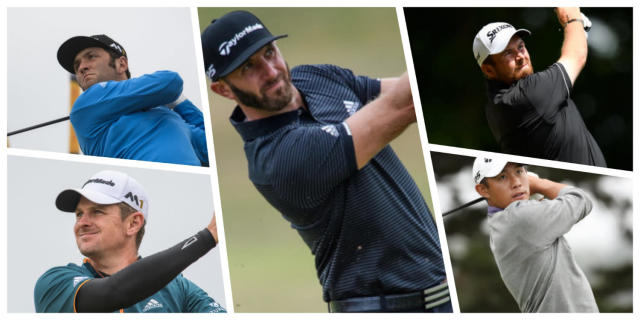 Dustin Johnson will be the shortest-lived champion in the history of The Masters tournament that is traditionally the curtain-raiser for the major season. He won at Augusta in November and will be back in Georgia to defend his title from April 8-11. The headlines may have been dominated in 2020 by Bryson DeChambeau but the Dustinator was a winning machine. He will end 2020 as world number one. He has a healthy lead at the top of the rankings and looks like he can win every time he plays. Who knows? Rory McIlroy may even be able compete over a full 72 holes.

The US PGA Championship comes next, from May 20-23, when the sensational young American Collin Morikawa will be defending his title. And it promises to be a cracker. It will be staged at the fearsome Kiawah Island in South Carolina. Fearsome? You might want to check out highlights of the 1991 Ryder Cup, the War on the Shore when Mark Calcavecchia ended up in tears on the beach on his own after an extraordinary collapse in his singles match against Colin Montgomerie. He was four up with four to play and lost the lot, including an extraordinary performance at the fearsome par-three 17th hole. Monty put his tee shot in the water. Calcavecchia followed suit. He had a two-foot putt to halve the hole. And missed. Bernhard Langer missed a short putt on the final hole that would have seen Europe retain the cup. Devastated in that moment, Langer showed what he was made of by going out and winning the following week. Calcavecchia says that he is still haunted by what happened to him - and he was on the winning side! There is plenty of water, lots of rough and fabulous greens. In other words, the perfect venue for a major.

Next up is the US Open at Torrey Pines from June 17-20. The tournament will be played over the South Course, which is the venue for the Farmers Championship. Jon Rahm will be looking forward to this one - it was the venue for his first PGA Tour victory, when he holed a monstrous putt down the full-length of the 72nd green, something that he makes a habit of doing. You may also remember that Torrey Pines was where Tiger Woods enjoyed his last US Open victory. Actually, “enjoyed” may not be the correct word. He required 91 holes to see off the challenge of Rocco Mediate - and it later emerged that he had won the tournament while suffering from a broken leg.

The Open should have been going to the Old Course at St Andrews. But, as you will recall, it was cancelled in 2020, when it was due to be held at Royal St George’s in Kent, and it will be staged there from July 15-18. You may recall that when it was last staged there in 2011 it was won by Darren Clarke in the most emotional of circumstances. When Shane Lowry steps up to the first tee to defend the Claret Jug, he will be able to take comfort in the fact that he will have been ’the champion golfer’ for two whole years. This is a course that should me made for Tommy Fleetwood. And an English winner is long overdue.

The Olympic golf tournament should have been held in Tokyo last summer, but the Olympic Games were postponed because of the global pandemic. All being well, Justin Rose will be defending his Olympic title at Kasumigaseki Country Club from July 29 to August 1. Rose struck gold in Rio in 2016 in another tournament that was affected by outside influences. Rory McIlroy was one of many who chose not to compete in Brazil, citing fears over Zika virus. He then rubbed salt in the wound. When asked if he would be watching the golf, he replied that he was sure he could find “better things” to watch, including the athletics. It seemed a very strange thing for one of the world’s leading golfers to come out with and he later admitted that his remarks were ill-judged, and passed on his warm and sincere congratulations to Rose, who held off Henrik Stenson.

And if you need anything else to whet your appetite for 2021, the season reaches its climax with the rescheduled Ryder Cup, to be held at Whistling Straits from September 24-26. Padraig Harrington’s team defend the trophy after their famous - and one-sided - victory in France in 2017. Of one thing you can be sure - Steve Stricker’s American team will be making a better fist of it this time as they will go into the contest with a team bristling with confidence and major victories. Johnson, DeChambeau, Morikawa, Justin Thomas, Tony Finau, Matthew Wolff, Cameron Champ, Daniel Berger, Xander Schaufelle, Patrick Reed - if the Ryder Cup was played on paper there would be little point in the Europeans turning up. Thankfully it is not. The Americans should win but there will be plenty of twists and turns, and bucketloads of drama…and I cannot wait!