The Chrome Soft is a product now synonymous with Callaway, a ball that has been engineered to provide a fast but receptive feel, which is an appealing and much sought-after combination for golfers.

Introducing Triple Track Technology was an addition that caught attention earlier this year, something that is included to encourage better alignment on the course. But the only way to discover whether the new ball delivers on that promise is to undertake a lengthy period of testing, placing the Chrome Soft in the hands of two regular, everyday golfers.

Golfshake Ambassadors Rob Treanor and Mel Davies received a stack of the balls to use, playing regularly with them throughout the summer, an experience both shared in their initial Callaway Chrome Soft With Triple Track Review.

But now, months later, and with the season behind us, the guys have now described their thoughts on the Chrome Soft and what difference it has made to their games.

"Having played the Callaway Chrome Soft exclusively for the summer of 2020 instead of my regular ball, I have to say I was extremely impressed. Tee to green the ball was as good as any premium brand on the market, but where the Chrome Soft really helped my game was with the putter. The Triple Track alignment aid inspires so much confidence and allowed me to imagine a much wider path to the hole than traditional balls.

"This shift in mindset and confidence influenced my scores. Tracking the statistics through Golfshake’s Score Tracker App, I knew that in the spring before I started playing the Chrome Soft my average putts per round was 32. A respectable number, I was pretty happy with where my putting was given my mid-teen handicap. Whilst playing the same courses with the Chrome Soft, my average putts per round during the summer dropped to 29. This is a really big deal and I attribute it to the feeling the visuals on the ball created as well as chipping in more frequently from areas around the green.

"More recently I played a round with a ball which had a traditional one line alignment mark and I have to say I felt lost without the Triple Track visuals! I would describe the difference of the Triple Track system as like ten pin bowling with the bumpers up. There is an added security and safety that the ball is on the right target line and that path is wider and more forgiving.

"I will play this ball going forward." 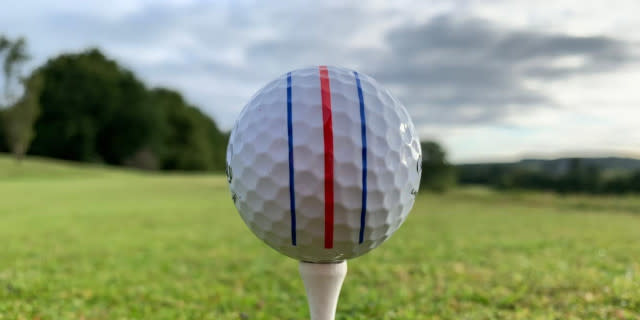 "The major thing I’ve noticed since using the balls is the consistency of feel around the greens, you get a very good flight on all chips and pitches, and when struck well they grab well even when the greens were firmer in the summer. I love the feel off the putter too and since using these I’ve felt very confident over the shorter length putts as I can line my Triple Track putter up with the Triple Track balls and I know that if my read was good I’m going to hole the putt as long as I put a decent strike on it. That for me is a game changer.

"I even use any slightly scuffed balls now for practice chipping etc to help familiarise myself with the balls which helps massively with gauging distance and check.

"I love the Triple Track lines for putting especially, but I also use them for lining up in my tee shots which has also seen me improve my fairway accuracy since using them. I’ve gone from hitting about 52% fairways to 74% from my Arccos stats and a lot of hat is again down the confidence I have standing over the shot knowing I’ve lined the club up to the ball. As long as my swing is good I’m aiming well and can hit fairways.

"I’ve been very impressed overall by the consistency and especially the durability of the balls, as they are premium balls at a premium price, it’s great to know they will last. I even managed to use one ball for well over three rounds and the ball was still scuff free and playing and feeling great."

It's fair to say that both Rob and Mel were left impressed by the Crome Soft and will use the ball going forward. If you want to know more about the product, check out this video we created at the beginning of the year.