ellesse has heritage in golf dating back to the 1980s and the new range features female and male apparel in a selection of colours and styles, using the latest performance materials and technology, a blend of polyester and elastane with built in moisture management. It will be on sale in store and online at American Golf from 03 August 2020 with prices ranging from £17.99 to £69.99.

Reid earned the coveted LET Rookie of the Year honour in 2008 and has continued to become a global steward of the game with three Solheim Cup appearances in 2011, 2015 and 2017. She also served as Vice Captain for the European team in 2019. Major highlights include a top-three finish at the KPMG Women’s PGA Championship in 2019 and a top-ten finish at the Women’s British Open in 2015. 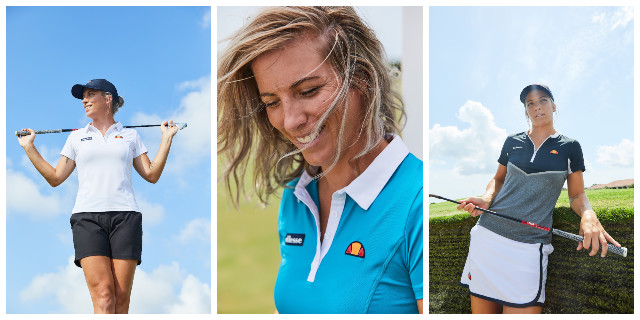 “Working with ellesse on this golf range has been an awesome experience. We had a lot of fun bringing the brand’s style and personality into each creation while keeping the focus on performance. Can’t wait to wear my favourite pieces when I return to competition later this month,” says Mel Reid.

“ellesse has a history in golf, and is excited to be back in the sport at such an exciting time. We feel this collection will bring flair and style to the course and we are very excited to be working with Mel Reid as her energy, attitude and personality reflect ellesse perfectly”’ says Jennie Bianco, Head of Marketing, Focus International.