STILL smarting from losing the recent Genesis Open, Justin Thomas returns to defend his title at the 2018 Honda Classic, which he won with a burst of brilliant play in regulation before taking it in a playoff.

A year ago, Thomas nearly holed a wedge on the par-five 18th hole for a birdie to force a playoff with Luke List at PGA National. He then struck a glorious five-wood over the water on the first playoff hole to set up an easy two-putt birdie that was good enough for the victory. “All I was looking at was the water to see if it splashed,” Thomas said of his approach.

“And it didn’t. So I figured I was in the bunker. And then people started clapping and I could kind of see some little white dot on the green.”

Thomas missed the 18th fairway in regulation and had no choice but to lay up. He had 117 yards to the hole. “I have a lot of confidence in my wedge game,” Thomas said. “I knew if I got a decent number that I was going to be able to get inside 10 feet. That’s all I wanted was a chance to try to get into a playoff. And then I ended up hitting a great wedge.”

Thomas has slipped to fourth in the world rankings and is determined to reclaim the top spot from Justin Rose that he briefly held in 2018. "It's extremely important. That being said, there's a lot of very stiff and hard competition," Thomas said.

"There's a lot of guys that are playing really well and it's such a tight race I guess you could say that really there's a handful of guys that are really two, three weeks away from, if they win a couple in a row or have a couple good weeks in majors or something, then they could just as easily take it over.

"So it is very important to me and it's something I try not to think too much about. I'm trying to win golf tournaments. That will result in getting closer or getting to No. 1. It's not like I'm out there practicing like, okay, this shot is to get to No. 1 in the world. But then again, I'm hoping to get back there." 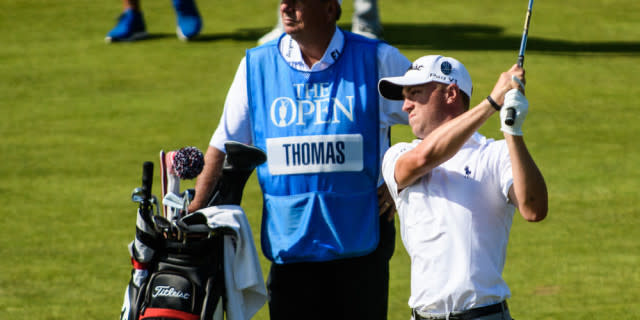 Thomas has been working hard on his driving accuracy in recent weeks and in one round at Kapalua he hit every fairway at the Tournament of Champions. "I think I was 12 the last time I did that," Thomas said. "I just have tried to stop caring as much. When I go play fun rounds with my friends or whatever it may be, I seem to drive it pretty well. I think it's just because I don't care about the outcome. I just have an idea of the shot I want to hit in my head and I step up and try to hit it, instead of all this left-to-right wind I have to try and hold it and I'm scared of missing it right.

"It's, look, if I miss the fairway, I miss the fairway. I've done that plenty of times in my career. I'm going to be able to get it out. I just need to step up there and just be and if it doesn't work out then we'll just go hit it wherever it is.”

He will face stiff competition from Koepka, the man who won two majors in 2018 despite suffering a wrist injury. He is only the seventh man to win back-to-back U.S. Open titles and only the fifth to win the US Open and the US PGA in the same year. Not since Tiger Woods won four majors in a row in 2000 and 2001 has an American golfer achieved the rate of success that Koepka has enjoyed - he has won three of the past six.

He did this despite suffering a partially-torn wrist tendon injury that sidelined him for three months. Among the tournaments he missed was last year’s Honda Classic. It was an injury that could have ended his career.

"Guys, basically, it’s the end of their career with the injury. The unknown isn’t fun," Koepka said. "To sit back and really hope to be able to play again. So just to be out playing was great, and then to do what I did was kind of, it’s kind of wild to think about it.”

Koepka turned pro in 2012 and started his career on the European Challenge Tour, where he won four times before advancing to the European Tour. "Going over there was a bunch of fun. It's the best time I've ever had playing golf," Koepka said. "You become more of a well-rounded player playing different places, having to travel, doing that sort of thing. I felt like I was good enough to be out here (on the PGA Tour) when I was there. It's just hard to get out here. I felt like if I just did what I was supposed to do and kind of dug deep and stayed patient that I was going to find a way. Luckily enough it was pretty quick."

Heading into the 2017 U.S. Open, Koepka had won more than $10m on the PGA TOUR, but was aggressively looking for more individual tournament victories. He had seven other Top 10 finishes to go with the win in Phoenix in 2015 and seven more in 2016. So he was around the lead on a regular basis. But it was not close to enough.

“I just felt like I should be winning more,” Koepka said. “I don’t know why — I just couldn’t stand the fact that I had only won once.”

But at the U.S. Open at Erin Hills in 2017, everything came together and Koepka has not looked back since. His 72-hole total of 16-under 272 tied the tournament record for lowest total under par, which was set by Rory McIlroy at Congressional Country Club in 2011. He had six additional top 10 performances during the year to go alongside the Open victory.

The wrist injury forced him to miss last year's Masters and it wasn't until the end of April that he was able to return to the Tour. He missed the cut in New Orleans and finished tied for 42nd at the Wells Fargo. But then everything came back. Koepka finished 11th in The Players Championship and second at Fort Worth. He showed up at Shinnecock Hills feeling confident that he could defend his Open title.

Things didn't look so great midway through the second round when Koepka was seven-over par. But he survived severe conditions on Saturday to get back into it. Then he pulled away from a three-way tie with three birdies in five holes in the final round to close with a two-under 68 and a one-shot victory. He was the first repeat U.S. Open champ in 29 years.

At the PGA at Bellerive, Koepka held off a charging Tiger Woods to win by two strokes.

Then in October, he started the 2018-19 season with a victory at the CJ Cup at Nine Bridges in South Korea. That victory allowed him to enter 2019 as the No. 1 player in the world before being caught and overtaken by Justin Rose.

Like Thomas, Koepka wants the No 1 spot back. "It does mean a lot to me," Koepka said. "I think that's such a cool honour, to be the best player in the world. I don't take it lightly. It's something that, every day, I'm trying to get better and improve on that and I'd like to gain that lead.

"But you know, with Rosey (Justin Rose), he's playing so well. I've just got to keep doing what I'm doing and hopefully squeak out a few W’s.”

Adam Scott. Just needs a good week on the greens

Cameron Smith. Better than he thinks