THOMAS BJORN breathed a sigh of relief as Padraig Harrington, one of his Ryder Cup vice-captains, came up two shots short of winning the Czech Masters, the penultimate European Tour qualifying event before the Dane discovers the identities of the eight men who will make his team by right. Had Harrington won in Prague it may well have given Bjorn something of a headache. The Irishman has shown no recent form but a victory here and another good performance in Denmark this week, after which Bjorn will finalise his team, would have forced him into the reckoning. 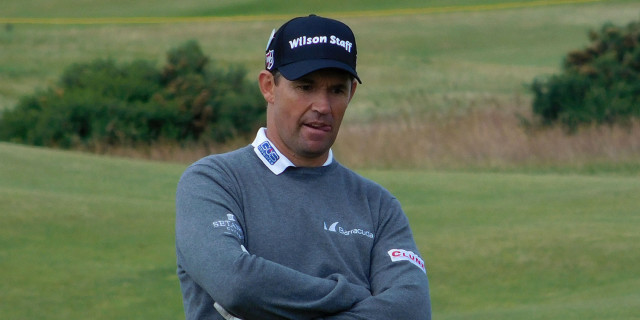 As it turned out, the three-time major champion, who began the final round tied for the lead, shot a final round of 69 for a 72-hole total of 268, 20 under par. It is a total he would have settled for at the beginning of the week, but it wasn’t quite good enough as Italy’s Andrea Pavan fired a final round of 67 for a record-breaking winning total of 22 under - his first European Tour title. Gavin Green, of Malaysia, matched Harrington’s 69 at Albatross Golf Resort to finish third on 17 under, two shots clear of Scotland's Scott Jamieson and Englishman Lee Slattery.

Pavan has waited a long time for this victory. He won the Challenge Tour Rankings in 2013 having finished second in 2011 and now has a European Tour title to add to his four on that circuit. He came through the Qualifying School in November and enters the winner's circle in his 112th event, making it three Italian wins in 2018 after Francesco Molinari's triumphs at the BMW PGA Championship and Open Championship.

“It's amazing, it's massive,” he said. “I've won four times on the Challenge Tour but it was a long time ago. I'll enjoy this one because it's really hard to get and I'll just keep working on the stuff that seems to be working and enjoy the success. “I'm going back home now and we're having a second baby, a little girl is coming on Wednesday. We're really excited about that and I can't wait to celebrate with my family.”

Harrington found sand off the first tee and was forced to lay up but got up and down, holing from around 15 feet to take lead on his own. He was seeking his first European Tour title since the Portugal Masters in 2016 and when Pavan dropped a shot at the second it looked like Harrington was on his way. Both men birdied the sixth and when Harrington picked up another shot at the ninth he led by three.

However, Pavan wasn’t finished. He picked up birdies at the 10th and 12th and all of a sudden the gap was down to a solitary shot. Harrington responded in magnificent fashion, almost recording a hole in one at the par-three 13th to extend his lead to two shots.

Pavan then birdied the next after hitting his approach to six feet and when Harrington dropped a shot at the 15th they were tied for the lead. The 29-year-old Italian went ahead on his own for the first time in dramatic fashion the par-three 16th. He barely cleared the lake guarding the green but then rolled in a 25-foot birdie putt. A 15-foot putt on the 17th brought another birdie and a par on the last prompted jubilant celebrations on the 18th green.

“Padraig has got so much experience, such a great player and he played lovely,” said Pavan. “The putt on 16 was massive. It could have easily gone both ways, he was ahead of me most of the day but after I got ahead I stayed aggressive.”

Green started with seven pars in a row but an excellent approach into the eighth sparked a hat-trick of birdies before he finished with another eight pars. Slattery made five birdies and a single bogey in a 68, while Jamieson also had one dropped shot to go with three birdies in a 70 that should secure his playing rights for next season.

England's Tom Lewis put himself in contention with six birdies in 13 holes but found water on the 16th for a double-bogey as he finished eight back. Fiji International presented by Fiji Airways champion Gaganjeet Bhullar and South African Jacques Kruyswijk finished 13 under, a shot clear of a group of nine players including Ryder Cup hopefuls Eddie Pepperell and Thomas Pieters.

“CRAZY is a relative term. Everybody is unique in their own way and some people work harder for longer hours than others. You can say what I do is crazy, but at the end of the day, I'm the one with the trophy this week.”

With those words, Bryson DeChambeau celebrated his four-shot victory at the Northern Trust, went to the top of the FedEx Cup Playoff standings and almost certainly secured his place on the American Ryder Cup team.

The 24-year-old American narrowly missed out on automatic selection for the team after winning The Memorial Tournament and finishing second at the Arnold Palmer Invitational, but made no mistake in converting his 54-hole lead at Paramus, New Jersey. He shot a final round of 69 to finish ahead of Tony Finau, another who will surely be giving Furyk some sleepless nights as he wrestles with the identity of his four wild card selections. DeChambeau was never seriously challenged after beginning his round with birdies at the first and second holes.

Miss highlights from Round 4 @TheNTGolf?

We've got you covered. ???? pic.twitter.com/mrBsN0ilw7

The nearest anybody got was when Aaron Wise got within two shots, but DeChambeau birdied the 12th and 13th holes and cruised home thereafter with that unique swing and those irons with shafts that are all the same length. Billy Horschel (68) and Cameron Smith (69) tied for third, five back. World number one Dustin Johnson finished on 10 under, with Phil Mickelson and England's Tyrrell Hatton one shot behind.

After his victory it emerged that DeChambeau has formed a close friendship with Tiger Woods, himself surely a racing certainty to get the nod from Furyk.  Woods, who finished in a tie for 40th place, said of their relationship: “I don't know,” said Woods (70, T40). “That's kind of one of the weird ones, yeah. It kind of just happened. It just kind of evolved.”

Woods and DeChambeau could not be more different. Woods is an instinctive player with amazing feel in his hands. DeChambeau has a manufactured golf swing, using the same swing plane for every shot. He does not appear to break his wrists in his golf swing, but still manages to regularly send the ball out there more than 300 yards.

“Well, Bryson, you know … he's very fiery,” Woods said. “We all know he's extremely intelligent, but his heart, he gives it everything he has and is always trying to get better.”


DeChambeau admits that he revels in the physics of the game. He is constantly talking about biomechanics, and he knows that many of his peers enjoy poking fun at him. But they can’t help admiring him and everything he has achieved (three PGA Tour victories to date).

“I like the guy,” said Kevin Na. “If I’m playing with him, I always make sure I have a question for him to stir up his brain and see if he has the answers. Like, we were doing an MGM outing at Shadow Creek and I asked him a question about green slope. I always poke him a little, see if he’s got the answers and is as smart as he says he is. He’s a great guy, and I’m happy for him.”

DeChambeau said he was drawn to Woods because of his outstanding play. “How good he is,” DeChambeau said of what he’s learnt from the 79-time PGA Tour winner. “I mean, I never realised the immense talent he has in regards to the feel in his hands and his ability to control the golf ball and do things that I've never seen before. … It's definitely helped this year. At times he tells me to shut up and hit the ball. It is what it is. (Laughing). It's fun. I like to joke with him a little bit. It's been great.”

“I feel a lot of the things that he says,” Woods said, “but we articulate it completely differently. But I understand what he's saying. … It's a lot of fun to needle him and give him a hard time about it, but I definitely respect what he says because of the fact that he does a lot of research. I mean, he is very into what he's doing.”

Of the Ryder Cup, DeChambeau said: "I said I was a man on a mission. Hopefully he [Furyk] can see I've got some grit and grind, and even when I don't execute certain shots I can get it done.” Furyk will name his four wild cards on September 5.

The New Jersey tournament was the first of four FedEx Cup play-off events. The field for this week’s Dell Technologies will be reduced to 100, with the numbers being cut to  70 and then 30 for the season-ending Tour Championship.