Golf technology company, Arccos, have launched their innovative new AI powered Caddie 2.0 software platform. The system allows golfers to track shots during their round and gives golfers “real-time strategies for every shot, on any hole in the world” through the new Caddie 2.0 platform.

Arccos currently operates a system called ‘Arccos 360’ which is the only automatic golf tracking system on the market and features a tracking sensor for each of your clubs. Users of the system are now able to access the new Caddie 2.0 platform which utilises a cloud based system powered by Microsoft Azure at no extra cost, to take their game to another level providing a 'caddie in their pocket'. 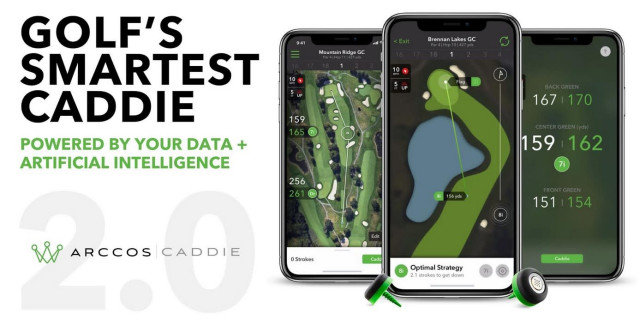 Having accumlated over one million rounds of golf played through the use of the system it has provided the developers with staggering amounts of data relating to a number of different parts of the game. The company say that their existing platforms have already “registered 418 million GPS course mapping data points, as well as collating 26 billion time-stamped, geotagged data points on golfer behaviours.” They also say that this makes their software the richest set of data in the game.

During a round the new Caddie 2.0 platform takes into account your data, course data and some additional factors to provide golfers with the best idea of a possible outcome for any shot that they face on the golf course.  According to Arccos, some of the contributing factors are; the user’s shot history, historical performance from other users of the platform, weather conditions, elevation changes, hole geometry and hazard locations.  All of these and more will mean that players will have an educated idea of what may happen with their shots.

Senior Director of Global Sales at Arccos Golf is fully aware of the technological movements in sport as well as the vast unavailability of human caddies to the golfing population. He said “The entire sports landscape is being revolutionised by advanced analytics, and golf is the most ideal sport for the application of these concepts.

“Working with Microsoft, we’re plugging into a very traditional framework – the caddie/player relationship – and taking it to the next level through the power of AI.

“Considering only 3% of golfers today have access to advice from a human caddie, we’re also helping adjust the caddie experience by making it available to anyone,” he added.

“Through the power of Microsoft Azure, amateur golfers have information at their fingertips, that was not easily available before. A.I. will have a huge effect on the golf industry and it’s an exciting time to be in this space as we help Arccos Golf lead the charge.”

Arccos has been thoroughly successful since it began and has not been short of recognition. Golf Digest and Golf Monthly are both hugely influential publications in the USA and UK respectively and have both recognised the company awarding them with Editor’s Choice awards.

The new Caddie 2.0 is definitely worth a look if you are looking for some modern golf technology to improve your game. For more information: https://www.arccosgolf.com

Marc Warren Turns Back the Clock to Win Austrian Open