American Golf recently staged its fourth Junior Championship in association with PING at Gainsborough Golf Club, where the main titles were up for grabs. Featuring a relaxed and fun atmosphere that is renowned, this year's climactic event was typically enjoyable for all, with parents and friends joining the young golfers on the course as caddies.

10-year-old Aaron Mohun from Chester took the overall American Golf Junior Championship crown scoring 41 stableford points to win the overall title as well as the Boys Handicap category by one shot. Aaron, who has previously taken part in the competition in the Star of the Future category, was delighted with his performance and can’t wait to come back next year, “It was third time lucky for me today and I have loved every minute of it. I made some good shot choices on the course and it really paid off. It feels awesome to be the overall American Golf Junior Champion.  I’d like to thank American Golf and PING for holding such a great event and I can’t wait to come back and defend my title next year.”

Madeleine Smith, who is a relative newcomer to the game, impressed to take the Girl’s Junior American Golf title by 3 points from her closest rival. She played impressive golf throughout her round but without a doubt, scoring a nett eagle on the 16th was certainly a highlight for the Southwell youngster who plays most of her golf at Norwood Park.

3 handicapper Nathan Newton scored a hugely impressive 3 over to take the gross American Golf Championship tile on countback after finishing on 33 points alongside Keene Honer, brother of the 2016 American Golf Junior Champion. The 15-year-old came close to winning last year so to take victory in this toughest of categories made this year’s competition even more sweet. 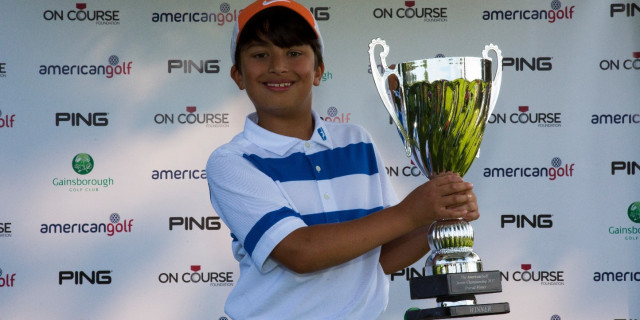 The Stars of the Future category has produced some great talent in the past and this year Ireland’s Ollie McEvoy and Sam McIntyre from Swillington showed incredible promise to take the 2017 titles. Both players, who won the Under 8 and Over 8 respectively, put together a 9 Hole round of 40. Sam’s effort was particularly impressive having won the under 8’s last year and moved up an age category to repeat his win.

Daniel Gathercole, Director of Marketing and Communications at American Golf continued, “The golf, sportsmanship and camaraderie on show today really has been first class. Some of the best junior golfers in the U.K. & Ireland have turned out to play in the Championship this year so the competition has been intense. But never within that cauldron of competition has any player lost sight of the fact that we’re here first and foremost to have fun and celebrate our love of the game of golf. PING have been superb hosts once again and from all the juniors and from American Golf, we can’t thank them enough for their hospitality.”

The Junior Championship, which will be shown on Sky Sports in October, is a vital part of American Golf’s drive to get more people out playing golf more often. In its fourth year, the Championship goes from strength to strength and with the quality of golf and personality on show through this year’s qualifiers and final, golf with American Golf has a very bright future.