WHEN Trevor Immelman won The Masters in 2008 he seemed to have the world at his feet. Having beaten Tiger Woods by three shots at Augusta, the South African was 28 years old and was seen by many as the successor to Gary Player and Ernie Els. He would surely go on to win many majors. 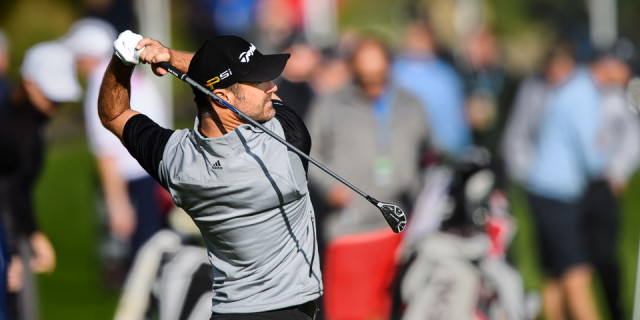 You may recall that 2008 was also the year that Woods won the last of his 14 majors, the US Open. Since then, he has won a further 14 tournaments despite his injury woes. And Immelman? Up to that point he had won five times on the Sunshine Tour, four times on the European Tour and twice on the PGA Tour. But since slipping into green jacket, nothing. Not a sausage. Worse than that, he hasn't even looked like winning. Unless you count the Web.com Tour. Which not many people do.

He has been dogged by injury and illness throughout his career and is just happy to be playing in the British Masters at The Grove, feeling fit and healthy. It may be hard to believe, but his world ranking now stands at 1,874.

In June 2009, Immelman withdrew from the US Open due to tendonitis  in his left wrist and elbow, which plagued him for much of the 2009 and 2010 seasons. And at the end of 2013 he was forced to play in the Web.com Tour Finals After failing to make the FedEx Cup playoffs and his five-year exemption for winning The Masters expired. Immelman won the Hotel Fitness Championship, the first of four Web.com Tour Finals tournaments, and duly regained his tour card for 2014.

Since then, his struggles have continued. Now aged 36, Immelman still struggles to come to terms with his place in the world. "Really, that hasn't been me playing," he said. "I don't mean that in an arrogant sense. I know what I'm capable of when I'm feeling good and feeling strong. You obviously know what your good golf entails and you know you’ve been able to showcase that on the biggest stage in the game. That adds a little bit of pressure from the standpoint of why am I not doing that all the time.

“I got into a lot of bad habits through the injuries, and with bad habits and bad play you lose confidence. It’s a slippery slope. But I’m starting to build all that up and the only thing I need now is a good result to get that going. I come to tournaments feeling like I can compete. It’s kind of inside me.”

"Confidence only grows when you shoot 65, when you hit 18 greens in regulation, when you get your name on the leaderboard. It's never fun not playing how you know you can play. You see that in ageing athletes. The game peels off strictly because of age, but they know how great they are and it's tough."

He turned professional in 1999 and joined the Challenge Tour, finishing 10th in his maiden season and qualifying to play on the European Tour in 2001 and won the Sunshine Tour order of merit in 2002-03.  In 2004 he became the first man to successfully defend the South African Open since Player in the 1970s. He had been chosen to represent the International Team at the Presidents Cup 2005, which secured him a two-year exemption on the PGA Tour, winning the Western Open in 2006 to move him into the top 15 in the world rankings. Later that same year he raised a few eyebrows by withdrawing from The Open to be present at the birth of his first child. Nevertheless, he finished in the top 10 on the PGA Tour money list.

His injury woes began soon after that. First, there was a stomach parasite that saw him lose nearly two stones in weight. And then he had to withdraw from the 2007 South African Open after suffering pain around his ribcage and breathing problems. A few days later he was rushed to hospital, where doctors discovered a lesion the size of a golf ball on his diaphragm.

It was diagnosed as a calcified fibrosis tumour and it was only after further tests that Immelman was finally told that it was benign. He missed the first eight weeks of the 2008 season before winning The Masters - and that despite a double-bogey at the par three 16th hole in the final round.

It would have been all too easy for Immelman to walk away from golf, especially after a season in which he made just two cuts earned only $29,000. But he is a fighter and a genuinely nice man, and there would be a warm glow around the world of golf if he could find a way to win again.