Inside the Bag of Open Champion Henrik Stenson

Henrik Stenson and Phil Mickelson produced one of the greatest major championship finales in history at Royal Troon, with the two Callaway professionals dominating the 145th Open Championship. The 40-year-old Swede would triumph with a final round of 63 on the Ayrshire, and here the clubs he used to do it.

Not since the legendary ‘Duel in the Sun’ in 1977, between Jack Nicklaus and Tom Watson at Turnberry, has The Open seen such fireworks as the runaway all-Callaway battle unfolded.

Mickelson, using a full bag of Callaway and Odyssey equipment, threw everything at fellow staffer Stenson in the final round, shooting four birdies and an eagle in a stunning 65, but there was no stopping Scandinavia’s first male Major winner.

Henrik’s final round 63 - including 10 birdies that equalled the lowest final round score in Major history - underlined an incredible 2016 season so far for #TeamCallaway and XR 16, with Major wins at The Open, The Masters (Danny Willett) and the ANA Inspiration on the LPGA Tour (Lydia Ko).

Alongside his XR 16 Driver, Henrik (40) – Sweden’s most successful male golfer of all time – also used his Legacy Black Irons with pinpoint efficiency over all four days, topping the ‘greens in regulation’ stats for the week, hitting 56 of 72 greens.

In the final round, his Odyssey White Hot XG #7H Putter was also on fire, the Swede needing only 27 putts to claim the coveted title. 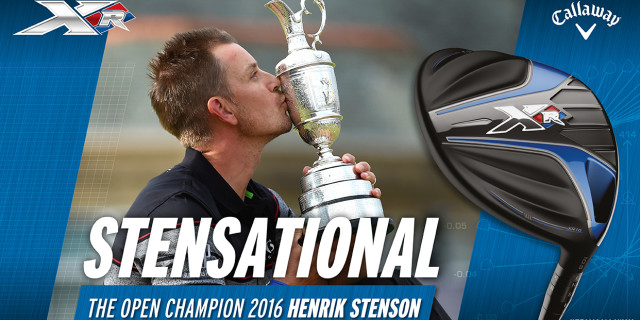 A jubilant Henrik said: “Wow, this will take a little while to sink in. I want to thank Phil for a fantastic battle. I want to thank my wife, my family, my team for all their hard work to make this possible.  I lost a dear friend to cancer earlier this week, and I feel he’s been with me all week. Mike, this one is for you.”

Neil Howie, Managing Director and President of Callaway Golf EMEA, added: “What an incredible Major for Team Callaway – seeing our Staff Professionals going head-to-head in the final group of golf’s oldest Major was something very special. Huge congratulations to Henrik, sincere commiserations to Phil, but if you shoot 63 on the final day of The Open and finished on a record -20, you deserve a Claret Jug!”

Equipment Insight:
Henrik first put the XR 16 Driver in play back in January, and he used it to win the BMW International Open last month. When he tested it on Trackman, he found that the ball speed was much faster and the spin dispersion was much tighter for him than his previous ‘gamer’.

His driver has a 45in shaft, has a shade of fade bias in the head and is set to the Standard loft adjustability.

His Legacy Black Irons and White Hot XG #7 Putter have been mainstays in his bag, and he first put Mack Daddy 3 Milled Wedges in play last year.

Equipment Insight:
Phil has played the XR 16 Sub Zero Driver since the beginning of the year. He likes the ability to produce low spin and still launch high, a combination that leads to more distance for him. Additionally, the CG bias allows him to control his shot shape nicely and features weight ports to help control spin rate.

He has been playing a Chrome Soft Golf Ball this year too, which he likes because of its soft feel, the low spin off the driver, and how easy it is to control his irons.

Mickelson was gaming the same black shafted putter model that he used to win the 2013 Open.

For further information about the complete Callaway and Odyssey product ranges visitwww.callawaygolf.com and www.odysseygolf.com

The 40-year-old Swede, who began playing the N.S. PRO MODUS³ Tour 120 X flex from May 2011, became the first male in his country’s history to win one of golf’s Grand Slam titles, shooting a historic final-round 8-under par 63. The round included 10 birdies and is considered one of best final rounds in major championship history.

The Champion shot a 20-under-par total of 264 with rounds of 68-65-68-63, the lowest 72-hole score in major championship history.  His final round 63 equaled the best round of the week, matched by his final round playing partner in the opening round, and is the second player to shoot 63 in the final round of a major and win.

“Nippon Shaft couldn’t be more proud and happy for this year’s Champion Golfer of the Year!  We are extremely pleased that he will now get the recognition he deserves,” said Hiro Fukuda, Sales and Marketing for Nippon Shaft.

It’s the second time in two weeks that Nippon Shaft products were used to win a major championship. The winner of the U.S. Women’s Open used Nippon Shaft N.S. PRO 950GH steel shafts in her irons and wedges to win the biggest championship in the women’s game.

Based in Yokohama, Japan, Nippon Shaft is the No. 1-selling steel shaft in Asia.  Nippon Shaft is a privately-held subsidiary of NHK Spring Co. LTD, a Japanese automobile parts manufacturer.  Nippon Shaft's North American headquarters is in Carlsbad.

Titleist Pro V1 loyalist Henrik Stenson produced one of the greatest performances in major championship history. Stenson was the only player to shoot four consecutive rounds in the 60’s at Royal Troon, closing with a final round of 63 en route to a 20-under par, 264 victory total, to finish three shots ahead of the field.

This continues the overwhelming trust from the world’s leading players, as Titleist golf balls continue as the #1 choice at The Open Championship since records have been kept, and mirrors the success at the previous two major championships this year. This is particularly significant at this year’s U.S. Open, where Titleist celebrated 68 years and counting as the #1 ball of choice for the field.

Elsewhere, there were three further wins for Titleist golf ball loyalists across worldwide professional tours. On the PGA Tour, Pro V1x loyalist Arron Baddeley took home the Barbasol Championship following a dramatic playoff at the Robert Trent Jones Golf Trail, Grand National. Baddeley finished with a birdie on the fourth extra hole to win his first PGA Tour title since 2011. Titleist was also the most relied upon golf ball at the event with 99 players, more than seven times the nearest competitor with 13.

There was further success for the #1 ball in golf on the Web.com tour, where Titleist Brand Ambassador Martin Flores (Pro V1x) secured his first career title at the inaugural Lincoln Land Charity Championship with a two stroke victory. On the Canadian Tour, Pro V1x loyalist Taylor Moore captured the Staal Foundation Open, having only turned professional seven weeks ago.

Stenson’s record-setting Open performance, combined with another major Championship as the overwhelming golf ball of choice, continues to prove that the world’s best players trust Titleist for their success.