Royal Park in Turin, the highest rated golf venue in Italy, has further cemented itself as a favourite among visitors across Europe in the past year, but now, with the launch of new packages, UK golfers had the chance to experience it for themselves.

The Royal Park I Roveri golf club - founded by the Agnelli family, which still manages the club - boasts two 18-hole courses. It is regarded as one of Europe's premier inland venues and is to encourage visitors from the UK with a selection of golf breaks.

The multi-award-winning venue is located in the ancient hunting grounds of the Parco Regionale della Mandria, surrounded by centuries-old forest and overlooked by the Italian Alps. The first of its two courses, an eponymous design by Robert Trent Jones Snr, was opened in 1971; the second, called Pramerica, was laid out by Michael Hurdzan and Dana Frey in 2013 - the duo behind the 2017 US Open venue, Erin Hills.

Royal Park's 6,566m, par-72, Trent Jones course was rated the top track in Italy in the latest, benchmark Golf World top 100 courses in continental Europe ranking - and 41st on the continent. It has also been rated number one in many other ranking lists and hosted the Italian Open four times between 2009 and 2012. Its 17th - a 428m par-four - was voted the ‘best hole in Italy' by the national daily Gazzetta dello Sport, the most widely read newspaper in the country.

The 6,572m, parkland Pramerica course was named the ‘best new Italian golf course' of 2014, by three golf magazines: Il Mondo del Golf, Golf Digest and Golf World. It was described by the club's former touring pro, Matteo Manassero - the youngest golfer to win a European Tour event when he took the 2013 BMW PGA Championship - as "unique … a challenging course which often requires a good long game and does not forgive mistakes".

The brothers Molinari, Francesco and Edoardo, were also members of the club when they won the World Cup for Italy in 2009. 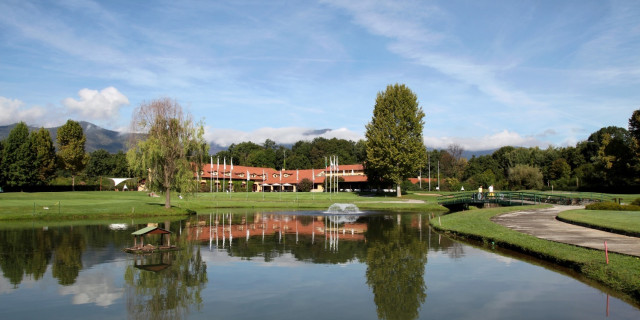 Royal Park's golf breaks for UK golfers comprise four and five-star options and can include additional courses and cultural tours, visiting places as diverse as local winemakers or the Juventus Stadium and club museum - Juventus also having strong links with the Agnelli family, with Andrea Agnelli currently the president. General tours of the city of Turin, including visits to the famed Reggia di Venaria and Egyptian Museum, are also available.

The club's executive board member, Romy Gai, explained: "Previously Royal Park did not advertise its presence to visiting golfers, but, last year, we took the decision to dip our toe in the water of the European market. This went very well and we were particularly enthused by the reaction of our visitors.

"So this year we are offering exclusive packages to UK visitors. The UK is the largest golfing market in Europe, yet many do not automatically consider Italy as an option when it comes to a golf break, even though some of the courses here are as good as any you can find elsewhere. And, in the case of Royal Park, better than most.

"Turin as a destination also has so much going for it, with its elegant boulevards, art nouveau cafes, art, history, nature, culture, and, of course, sporting heritage. And access from the UK could not be easier with a number of airlines flying in daily."

The club specialises in offering golf clinics - with a variety of options available staying at a choice of hotels. The clinics take advantage of Royal Park I Roveri's unrivalled facilities and can include dinner in the clubhouse restaurant; green fees; free trolley; unlimited use of the putting green and approach area; unlimited balls; free bag storage; free battery recharge for personal electric trolleys; 15 per cent discount in the pro-shop; coaching; and use of the gym.

The four-star Quality Hotel Atlantic, in Borgaro, is just 12km from the golf club, and even closer to Turin-Caselle Airport. It features a spa with indoor pool, Turkish bath and sauna, and the renowned Rubino restaurant. A three-night, room only, two green-fee package - including free trolley, 25 range balls, liability insurance and 15 per cent discount in the pro shop - costs from €350 per person, based on two sharing a double room.