A guide to golf in the Dominican Republic

MANY of you will be familiar with the Dominican Republic, an increasingly popular destination for Britons in the Caribbean. It was discovered in the 15th century by Christopher Columbus and is surrounded by the Atlantic Ocean on the north and the Caribbean Sea on the south. It has 1,000 miles of coastline and 250 miles of sandy beaches where you can lie back, relax and realise how lucky you are to have discovered this tropical paradise.

A direct nine-hour flight from the UK with British Airways, it is best known for its beaches and all-inclusive luxury breaks but, as we will discover, it has a great deal more to offer and is a stunning destination for British golfers and their friends and families.

The Dominican Republic has a population of 9.5 million and the capital is Santa Domingo, where 3 million people live. Spanish is the official language but almost all of the locals speak English. It is a popular part of the world, with a staggering 4.5 million tourists every year, 40% of whom are Americans.

The climate is perfect, with heaps of sunshine, very little rain and an average temperature of 25C – that’s about 78F in old money and is ideal for golf. High season is between November and March, but the best time for golfers to visit the Dominican Republic is April or October, when you will pay low-season rates, arranged for you by golfbreaks.com.

Punta Cana and La Romana are the best, and most popular, areas for golf, featuring more than 15 wonderful layouts, some of them designed by the likes of Tom Fazio, Jack Nicklaus and the incomparable Pete Dye, who is responsible for some of the most fearsome golf courses on the planet if you happen to be tackling them from the championship tees. 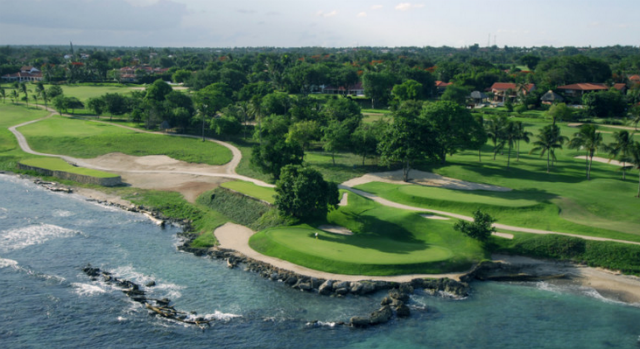 Casa de Campo, at La Romana, is a magnificent resort, featuring glorious sandy beaches and three Pete Dye courses, the most famous of which is called Teeth of the Dog, which is rated among the best 50 golf courses in the entire world – now that is some boast for any course. The ocean comes into play on many holes on a course scattered with palm trees, dozens of bunkers and the waste areas that are such a feature of Dye courses. Accuracy from the tee is at a premium on the Dog. There are many dog-legs and several fabulous par threes. The prevailing trade winds also add to the degree of difficulty. Dye claims the course is ‘the work of God’ – if you are not on your game, you may be inclined to believe the fellow downstairs also had a hand. The other courses are Dye Fore, which measures a staggering 7,740 yards and features seven cliff-side holes, and The Links, which was recently renovated and, although not as tough as the other two layouts, is plenty challenging enough.

Casa de Campo also attracts some serious stars, with the likes of Enrique Iglesias performing in the area. Apart from golf, there are 13 tennis courts, three polo fields and a 245-acre shooting area. It has its own private beach, a spa and luxurious rooms and wonderful food on offer. The owners describe Casa de Campo as a piece of paradise – it is difficult to argue.

Punta Cana features several golf courses that run alongside the ocean – the Jack Nicklaus-designed Punta Espada, Corales, crafted by Tom Fazio, and La Cana, which is yet another Pete Dye classic.

Punta Estada is a breathtaking ocean course, one where, to be frank, it really wouldn’t matter if you have the worst round of golf of your entire life because you would just stand back and take in the glorious ocean views. Water plays a big part in the design of Punta Estada, coming into play on many holes. It’s one of the Golden Bear’s finest pieces of work. Corales is a more traditional links-style course – if it weren’t for the fantastic weather, you could almost convince yourself you were playing in Scotland. At La Cana, 14 holes on the 7,474-yard course have ocean views and the grass used here can be watered using sea water, which is great news for the environment. 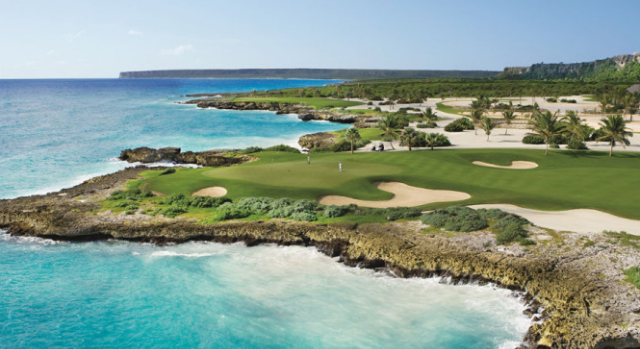 Punta Cana is built around tropical beaches, with palm trees set yards from the turquoise ocean. Apart from golf, you can try your hand at any water-based activity that you could possibly imagine. Or you could try a helicopter trip, a cruise, spa or balloon flight. The nightlife is vibrant, with a great choice of hotels, bars, clubs and restaurants. Unsurprisingly, the speciality in Punta Cana is locally-caught, mouthwatering seafood of all shapes and sizes.

One of the best places to stay in Punta Cana is the Barceló Bávaro Beach resort, a five-star, adults-only resort which has four establishments featuring nine a la carte restaurants and offering magnificent all-inclusive packages.

Westin, Melia, Hard Rock, Hilton, Holiday Inn, Accor, Marriott, Majestic, Barceló and Iberostar are just some of the major hotel brands operating in the Dominican Republic, based in resorts which include golf courses, all of which are of the highest quality.

There is something to suit every pocket in the Dominican Republic, from excellent value all-inclusive resorts such as Catalonia Bavaro to the high end luxury on offer at Tortuga Bay – villas there are the stuff of dreams and each comes with its own butler.

Book your stay at Tortuga Bay and you will receive a priority service that will ensure you get through customs without delay and then into a private chauffeur-driven car to take you to your luxury accommodation. You can choose from a variety of properties, all located beside the beach and all furnished to the highest possible standards. A golf buggy is issued to all residents for use to get around the resort. Your accommodation will include a 37-inch plasma TV, DVD player, broadband internet, air conditioning, ceiling fan, ice-maker, microwave and coffee/teamaker. Amenities are exactly as you would expect – access to La Cana Golf Club, swimming pool, Jacuzzi, fitness centre, bikes and kayaks, to name but a few.