Get Golfing in Lisbon

WHEN golfers consider Portugal for a break, it is hardly surprising that most automatically look at the Algarve. It is, after all, home to some fabulous courses, but it also tends to be pretty busy.

So what other choices do you have? Well, if you like the people, the culture, the food, the weather and the courses, then you might want to consider Lisbon as an alternative. Quite apart from what it has to offer as a city in its own right, some of Europe's finest golf courses are right on the doorstep. It is also only a two-hour flight from London, with plenty of cheap flights on offer.

Lisbon, the capital of Portugal, is a vibrant coastal city of 2.7m people known for its cafe culture and soulful Fado music. It is one of the oldest cities in Europe and enjoys a wonderful climate - average temperatures from November through to February are about 15C, while from May to October the average is 25C

If football is your thing, try to take in a match involving either Benfica or Sporting Lisbon while you are there. Benfica was the side that Eusebio played for and was also the club that helped to develop the extraordinary talents of Cristiano Ronaldo, the world footballer of the year.

The Bairro Alto is the shopping and entertainment district, and is where you will find Lisbon's nightlife, with an eclectic music scene featuring punk, metal, Goth, hip hop and reggae. There are bars and clubs that cater for each type. The people you will meet here are a multicultural mix representing a broad cross-section of Portuguese society. Surprisingly, perhaps, traditional Fado music continues to thrive in the midst of this bustling nightlife.

Or you could stay in Estoril, which houses Europe's largest casino, tennis courts, the racetrack that has hosted many Formula One Grands Prix and a fabulous sandy beach. The beach of Tamariz has a number of bars and restaurants, and is overlooked by a castle owned by the Monaco royal family.

Behind it is the casino, with its stunning gardens. Opposite is the Hotel Palacio, which featured in the James Bond film, On Her Majesty's Secret Service.

A beachfront promenade links Estoril to Cascais and frequent trains connect it to Lisbon. 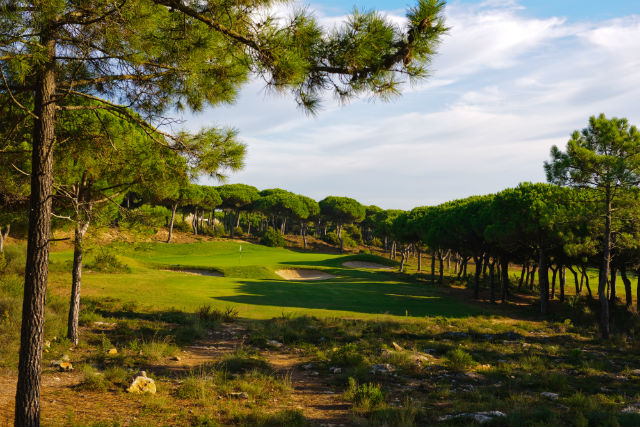 Oitavos Dunes was designed by the American architect Arthur Hills and has hosted the Portugal Masters on four occasions. It is a wonderful course, rated among the best in mainland Europe. It lies within the beautiful Sintra-Cascais Natural Par and is set among pine trees and reforested dunes in what is officially designated as an area of outstanding natural beauty. One of the many bonuses it offers is extensive ocean views. Cabo de Roca, the most westerly point in continental Europe, can be seen from the ninth, 10th, 11th and 14th holes.

The short par-four 11th is a reachable hole when the wind is at your back - a terrific risk-and-reward hole, where you can score anything from an eagle two to a seven. The par-three 14th is a hole that changes in character depending on the breeze. It can be anything from a short iron to a long iron or even a hybrid across a gully when it is blowing straight into your face. The par-four 18th is a tough finishing hole demanding an accurate drive. You can find yourself having to hit the ball high in the air to clear the trees or a big hit into a raised green into the wind. The challenge is picking the correct landing spot short of the green for the ball to roll up to the putting surface. Thick grass on the upslope adds to the difficulty. 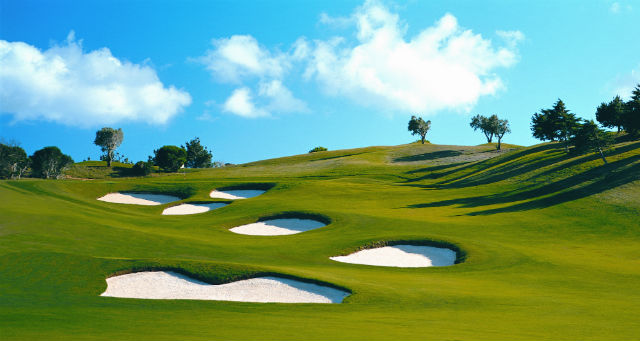 Penha Longa is 30 minutes from Lisbon airport and just 10 minutes from Estoril and Cascais. It features a nature reserve, 27 holes and a 5-star hotel with 194 rooms and suites. The Atlantic course, designed by Robert Trent Jones Jr, opened in 1992 and is another that is ranked among the finest in Europe. It has hosted the Portuguese Open and many other professional tournaments. The Atlantic is a challenging course for golfers of all standards. It blends in perfectly with its surroundings and there are breathtaking views both of the ocean with Estoril and Cascais in the foreground, and over the mountains. Six of the holes are situated in the valley, while the remainder are built on a hill and provide fabulous views of the Sintra Hills.

The Atlantic South Course is a combination of the back nine of the Atlantic Championship course and the Monastery course, which was built in 1995 on a former monastery. Golfers can enjoy the superb scenery, with the hills of Sintra in the background and a number of stunning lakes surrounding the course, all of which make the Atlantic South course a pleasure to play.

There are two courses at Praia d'el Rey, the first is the old course and winds it's way through pines and dunes. This is a proper links and in many ways is reminiscent of Royal Birkdale and Sandwich. It was designed by the American golf architect Cabell Robinson, who went out of his way to incorporate the natural contours. The fairways are lush, and the golf ball really sits up. Many fairways are lined with pine trees and there are plenty of deep bunkers to be avoided. The key feature, however, is the wonderful sloping greens.

The front nine has a parkland feel, while the back nine offers some of the best links golf in Portugal. The 13th, 14th and 15th run alongside the Atlantic Ocean, with fantastic views of the sea, dunes and back towards the pine forest. At the 12th, you play your approach with the ocean as the back drop and you get to the green and the Belengas Islands come into view.

West Cliffs, a Cynthia Dye design that is the second course at Praia D'el Rey and it is truly magnificent. Courses that use and fit into the landscape on which they were built are rare and even more so when you look at recent constructions and that is why West Cliffs can be considered as a modern masterpiece.

Although the course is truly unique, it has echoes of the Surrey sandbelt and courses such as Hankley Common and Sunningdale (yes, I know that is in Berkshire). It also reminds you of Whistling Straits and Cynthia Dye certainly points to that course as an inspiration for her green designs.

You can view the ocean from all 18 holes with the back nine sweeping ever further up the hill to provide some truly spectacular views. However what is most impressive for me was the use of natural vegetation to create a course that almost feels timeless, I was lucky enough to play one of the very first rounds at West Cliffs, but if felt like it had been there for decades, a trick that I suspect many golf architects aspire to.

Bom Sucesso is an 18 hole championship course designed by the legendary Donald Steel. It stretches along the length of a resort which is made up of villas and apartments, a hotel with spa and other leisure facilities. The proximity of the sea and the Obidos Lagoon offers breathtaking views from many parts of the course. The front nine is built on elevated terrain, which enhances the views, while the back nine is played on undulated land, making its way through a forest of eucalyptus trees. It is a par 72. During construction, the project was overseen by the chairman of the British Association of Golf Course Constructors, which ensured that it was built to the highest stanard and met international standards.

Troia is located beside the sea at the crossroads of the Sado Estuary and Serra da Arrábid. Designed by Robert Trent Jones Jr, it was named one of the best golf courses in the world in 2011. Trent Jones was so pleased with the third hole that he described it as one of the best he had ever designed and included it in his perfect 18-hole course. The third is a par four with stunning sea views. The 18th, a par five, is also pretty special. It is a dogleg left, played to an elevated green that is protected by three bunkers and it requires some pretty imaginative shotmaking.

He may be gone, but golf courses such as Royal Obidos mean we will never forget Seve Ballesteros, who designed it. Seve described it as a “great and wonderful place”, designed to test players of all abilities. It is a heathland course, which is rare in this part of the world. The opening hole is a testing right handed dogleg, and it is followed by one magnificent hole after another. This place truly was a labour of love for Seve.

The modern clubhouse boasts stunning views across the golf course and ocean. You can relax with a cold drink from the bar after your round on the spacious verrandah and watch the world go by.