Gullane Golf Club has released details of the Championship Course that will host the 2015 Aberdeen Asset Management Scottish Open. Played across the classic links turf at Gullane, the tournament will be the first European Tour event to be staged at the East Lothian venue which boasts three courses as well as a children’s layout.

The new Championship Course will incorporate 16 holes from Gullane’s renowned No. 1 Course and two holes from its striking No. 2 Course, which was laid out by Willie Park Jr. Three of the holes will feature recently built tees creating a new and challenging routing offering a modern test across a traditional links setting. 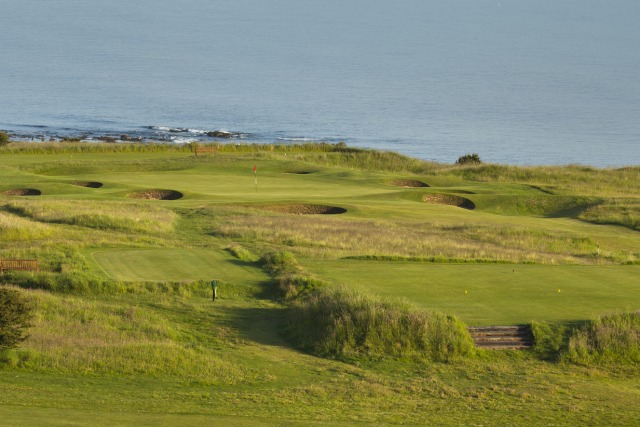 “Although Gullane has staged many world-class tournaments such as local final qualifying for five Open Championships and the Ladies’ British Open Amateur, this will be the first time in its 133-year history that it has hosted the Scottish Open,” explained Robert Dick, captain of Gullane Golf Club. “The Scottish Open represents a new and exciting chapter in our club’s history.”

He continued: “The Championship Course will showcase the quality of golf on offer on Gullane Hill. This is special golfing land and we look forward to welcoming the best players in the world to experience it. It should be a great week.”

The Championship Course consists of 16 holes from No. 1 – 2nd to 16th, and 18th – and two holes from No. 2 – the 7th and 8th. New championship tees have been built for the 15th and 18th on No. 1 and the 8th on No. 2. The variety of topography and outstanding choice of challenging golf holes that are present at Gullane has enabled the creative use of existing tees to enhance the challenge of the Championship Course. Apart from the excitement and exacting test this will create, one of the benefits is the short walking distance between greens and tees.

With the likes of Justin Rose, Luke Donald, Phil Mickelson and Matt Kuchar competing over the course for the first time, the Aberdeen Asset Management Scottish Open is set to be a standout sporting event this summer. As Championship Director Peter Adams noted, the tournament will be one to savour.

“We can’t wait to get going at Gullane,” he said. “The professionals love testing themselves on classic links and with several of the players who featured at Augusta playing, the Aberdeen Asset Management Scottish Open will once again have an outstanding field. This tournament is the first leg of a double header that will see the golfing world focused on Scotland’s east coast at Gullane from July 9-12 and then across the Forth estuary at St Andrews for The Open the following week.”

The Championship Course utilizes many of the features that have made Gullane a firm favourite with both Scottish golfers and visitors alike. Incorporating world-class turf and stunning views across the Firth of Forth, the new layout will be a great test of links golf, according to David Morgan, Gullane Golf Club’s Secretary.

“We are fortunate at Gullane to have over 600 acres of stunning links land on which to create a unique championship course,” he noted. “The course created for the Scottish Open has been specifically designed with today’s players in mind while retaining all the character of a traditional links layout. And with an army of volunteers from Gullane and neighbouring clubs to help run the event, we are extremely excited about this very special tournament.”

First played in 1972, the Scottish Open has been held at a number of prestigious courses including St Andrews, Gleneagles, Carnoustie, Loch Lomond, Castle Stuart and Royal Aberdeen.