A guide to golf in Mauritius

MAURITIUS is a little piece of paradise in the middle of the Indian Ocean. The climate is superb, with temperatures ranging from 23-28C all year round. When you are looking for a golf holiday, it may not be the first venue that springs to mind, but the island boasts some fabulous courses and all-inclusive golf resorts. And it is a great place to bring the family.

May to October, when the average temperature is "only" 24C is regarded as the low season, and that is when there are some great bargains to be found.

It is about 12 hours flying time from the UK and the population speak three languages - English, French and the local creole. It means that communication is not a problem. Surrounded by ocean on all sides, you can also be certain that there is some fantastic seafood on offer. Mauritius is your typical tropical island, with bright blue ocean, white sands - and emerald green fairways on courses designed by some of the biggest names in golf, including Ernie Els and Bernhard Langer. The locals describe it as millionaire's golf and it is - in every aspect other than the price.

So what about the courses? Let's start with Le Touessrok. Believe it or not, you and your clubs get there via a 10-minute boat ride from the resort mainland to a course located on its own breathtaking island, Ile aux Cerfs. It is set in a beautiful garden, with spectacular views of the surrounding lagoon.

Bernhard Langer designed the 18-hole, par-72 championship course, designed to challenge the best amateurs, while ensuring it is playable for golfers of all standards. It measures 7,082 yards from the back tees. 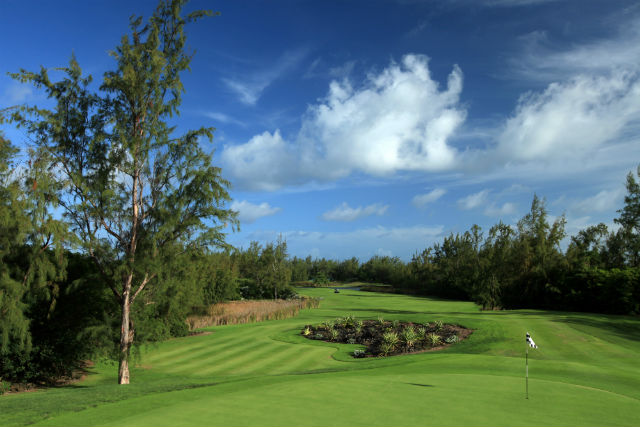 The course has five tee boxes on each hole, which allows the angles of attack and approach shots to vary greatly. There are a number of wide fairways but there are also holes where accuracy from the tee is paramount to have any chance of reaching the green in two.

Designed by Ernie Els, the Four Seasons Anahita golf course is a 7,500-yard, 18 hole, par-72 championship course with large fairways and five sets of tees. Six stunning ocean front holes culminate in a final shot that is among the most spectacular in the world.

Appropriately enough since it measures 7,500 yards, it is the home club of the Belgian Ryder Cup player Nicolas Colsaerts, who is one of the longest hitters on the European Tour. Lush mountains form the backdrop and the course is fringed by a vast crystal-clear lagoon. Buggies are included as part of the green fee. 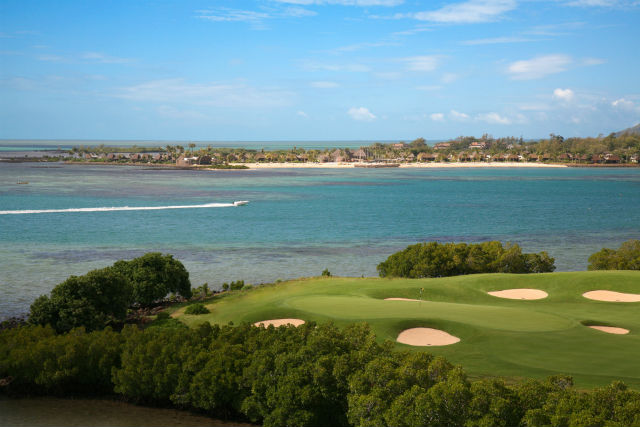 At the heart of the Domaine de Bel Ombre, close to the Heritage hotels, lies Heritage Golf Club, a par 72 measuring 7,048 yards and designed by Peter Matkovich. It meanders among the hills and features a magnificent, turquoise lagoon.

The Heritage Golf Club is tough but fair. It also has a nine-hole par three course, a double-ended grass driving range and a short game area, and you can have your golf swing analysed on computer for an enhanced learning experience. In May it will host the first tournament in Mauritius to be sanctioned by the European, Asian and Sunshine Tours. 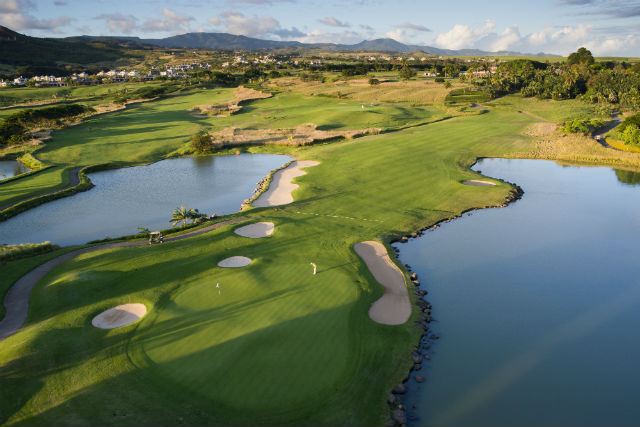 Designed by former European Tour star Hugh Baiocchi, the Legend Course at Constance Belle Mare Plage is located alongside one of the best beaches in Mauritius. Each of the 18 holes is entirely distinctive and the superb fairways are laid in the heart of a forest, with fabulous greens. The signature hole is the par-three 17th, to a green surrounded by water. The 6,587-yard course hosts the European Senior Tour's MCB Tour Championship every December.

Carved into the southwest coast of Mauritius, between mountains and ocean, Tamarina Golf, Spa and Beach Club is the first residential golf estate on the island. It features 119 luxury villas, an 18-hole par 72 course,  a golf academy, tennis courts and a clubhouse with a pro shop, and a bar and restaurant.

The course plays 7,500 yards from the back tees, but again, each hole offers five different tees. There is also a huge practice range, a large putting green and  a short game area. 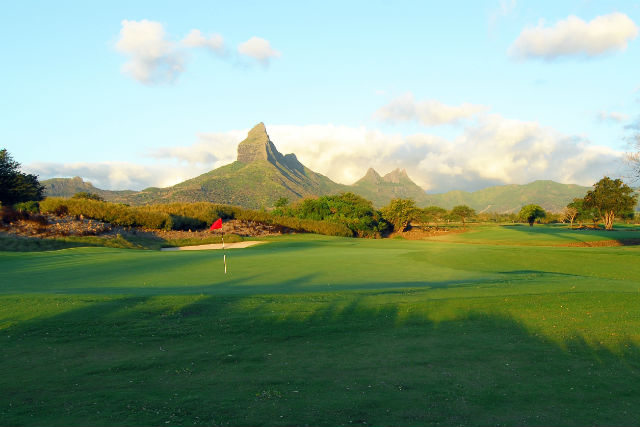 Due to the climate and the nature of the terrain, golfers are encouraged to use golf carts throughout the course. A halfway house is also available, located between the 9th and 10th holes for refreshments and snacks. Heaven!

Le Paradis Golf Club, designed Tony Johnstone, measures just 6,500 yards but it is probably the most beautiful course on Mauritius. It winds its way along the iconic Morne mountain, as well as along the shoreline, with many holes offering wonderful ocean views.

The course is a pleasure to play, but remains a challenge, especially when the wind blows. The back nine holes are spectacular, as they run along the coastline. The 16th is a challenge, featuring a lagoon on the right hand side, and a large water hazard on the left. 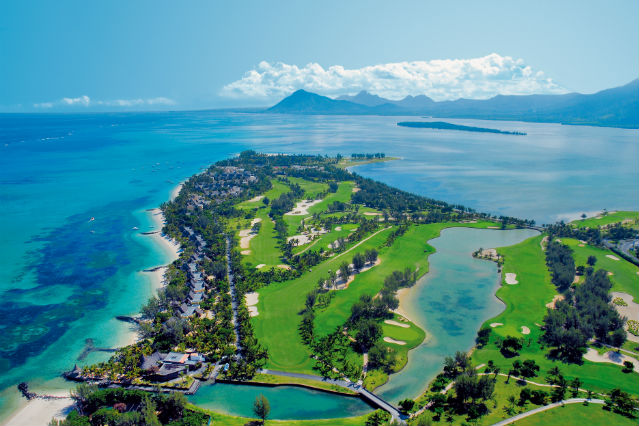 The clubhouse also has an excellent bar and a well-stocked pro-shop.

Mauritius is famous for its varied flora and fauna, with many species only found on the island. It was the only known home of the dodo, which became extinct soon after the island was inhabited by human beings. Its economy is based on tourism, textiles, sugar, and financial services. In recent years, information and communication technology, seafood, hospitality and property development, healthcare, renewable energy, and education and training have emerged as important sectors, attracting substantial investment from local and foreign investors.

From the stunning sand-rimmed lagoons and popular  public beaches to the picturesque islands off the country’s coastline, there’s something for everyone here. Add to this Chinese, Indian, French and African cuisine, the rousing beat of séga music and the party spirit of the locals, and it is easy enough to understand why Mauritius regarded by so many people as paradise on earth.

The National History Museum is worth a visit. It is housed in a  colonial mansion that played an important part in the island's history. It was here in 1810 that the injured commanders of the French and English fleets were taken for treatment after the Battle of Vieux Grand Port. The story of the French victory is retold in the museum, along with salvaged items – cannons, grapeshot and the all-important wine bottles – from the British frigate Magicienne, which sank in the battle.

The museum contains some fascinating artefacts, including early maps of the island and paintings of Mauritius' original fauna including, of course, the dodo; there are also a few bones of the dodo in a glass case. One real curio is an engraving of Dutch men riding in pairs on the back of a giant tortoise, a species that also became extinct.

The bell and a cache of Spanish coins from the wreck of the St Géran are also on display. Whether you are looking for great golf, beautful beaches, a warm sunny climate or a touch of history, Mauritius has the lot.