As Spain’s flagship destination resort, La Manga Club is at the forefront of the drive to keep modern travellers fit, healthy and happy, and the award-winning five-star venue continues to scale new heights after delivering remarkable figures in 2014.

The luxury complex in Murcia, south-east Spain – named ‘Best Golf Resort in Spain’ at the 2014 World Golf Awards and 2015 Today’s Golfer Travel Awards, reported a significant growth in numbers across its sports, leisure and business sectors last year as people flocked to enjoy its range of five-star attractions. 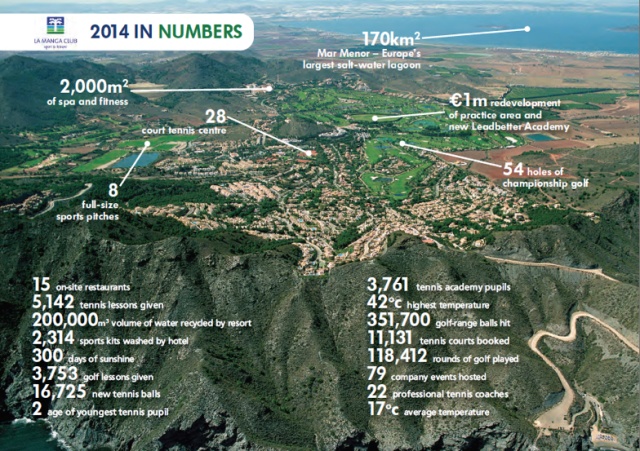 Among its many highlights, La Manga Club opened a new €1m world-class golf tuition facility last September with its centrepiece, a bespoke Leadbetter Golf Academy – the only one of its kind in Spain – helping to increase numbers across its golf facilities.

The academy’s team of expert professionals gave 3,750 lessons in 2014 with more than 350,000 practice balls being hit on the range and an amazing 118,400 rounds being played on the resort’s three championship golf courses – an average of nearly 325 rounds per day.

There was just as much interest in La Manga Club’s famous 28-court tennis centre – the overseas training base of the Lawn Tennis Association – with more 10,000 court bookings made and in excess of 15,000 new tennis balls used during the course of the year.

Around 3,500 guests attended the resort’s popular tennis academy in 2014 with its team of 22 coaches giving more than 5,000 lessons to players of all ages and abilties – with its youngest pupil just two-and-a-half years old.

Founded in 1972, La Manga Club is a confirmed favourite for lovers of all sports including football, rugby, cricket, cycling, athletics and triathlon and, among the other stand-out figures, the resort laundered no fewer than 2,300 sports kits for the numerous professional teams that stayed on warm-weather training breaks last year.

Business was equally as brisk across the rest of the resort as guests sampled the range of luxury facilities available including four and five-star accommodation and access to more than 20 bars and restaurants, while
the destination venue – which enjoys an annual 300 days’ sunshine – also performed well on an environmental basis with 200,000 cubic metres of water being recycled over the last 12 months.

Set in an area three times the size of Monaco, the resort features unrivalled facilities as a sports and leisure destination and, as well as its golf courses, includes a 28-court tennis centre and a 2,000sqm spa and fitness centre. It also offers the choice of a five-star hotel, four-star serviced apartments and townhouses and more than 20 bars and restaurants.
For more information about the resort and to book a break, call 00 34 968 17 5577, email [email protected] or visit www.lamangaclub.com.