The South Atlantic island of Gran Canaria might not be the first place you think of when planning your next golfing holiday abroad, but consider this; 7 stunning golf courses, year-round sunshine, beautiful sandy beaches and excellent

Gran Canaria is a round island, pretty much as round as an island can get. The reason for this is it's volcanic geology. As result it boasts a micro climate that sees temperatures rarely rise above 24 centigrade.

A central mountain range splits the island in two across the middle, creating two contrasting areas in terms of climate and landscape, which for the islanders are simply known as north and south. Whilst in the latter the great sandy expanses of beach abound, such as Playa del Inglés or the Dunes of Maspalomas.

The island is also heavily protected from development with 43% of the land mass currently off limits. This means the scenery and wildlife is amongst the best anywhere in the world.

So, what about the Golf? Due to the distinct two halves of the island the golf courses appear in clusters, 3 on the north and 4 on the south side of the island.

The oldest course in Spain finds it's home in the North of the island. Real Club de Golf de Las Palmas was founded in 1891, but was rebuilt some years later in the crater of one the island's volcanoes. A 18 hole parkland course, it is well matured as you would expect and boasts stunning views of the extinct volcano and it's nearby ravines.

Also, found on the North side of the island is the El Cortijo Golf Course. A stunning layout 18 hole, par 72 layout that winds it's way around 6 lakes and features over 600 palm trees. 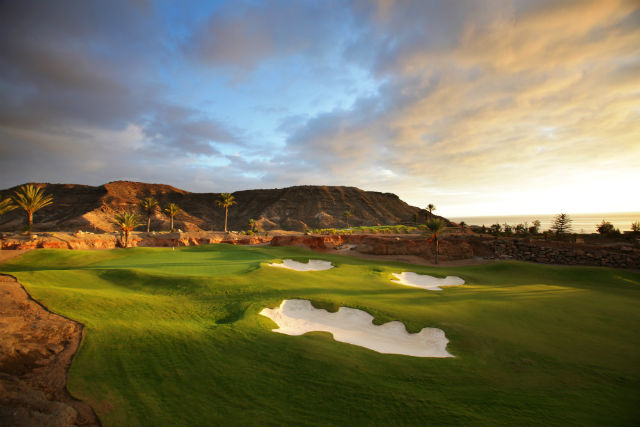 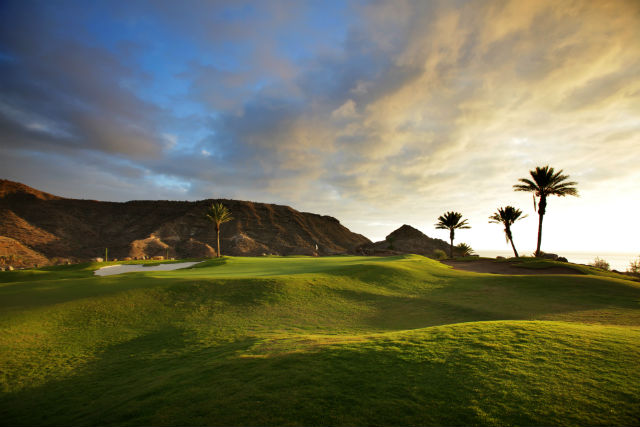 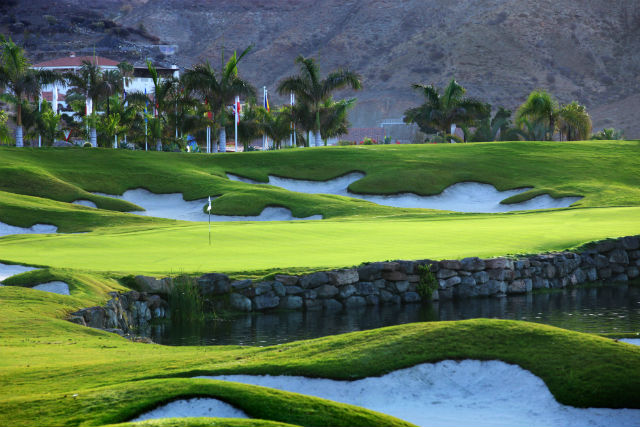 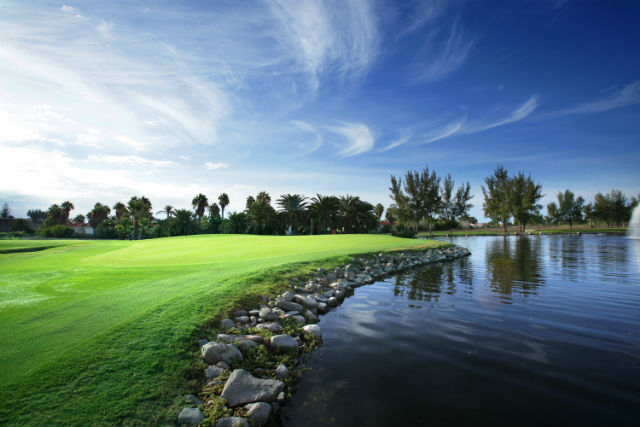 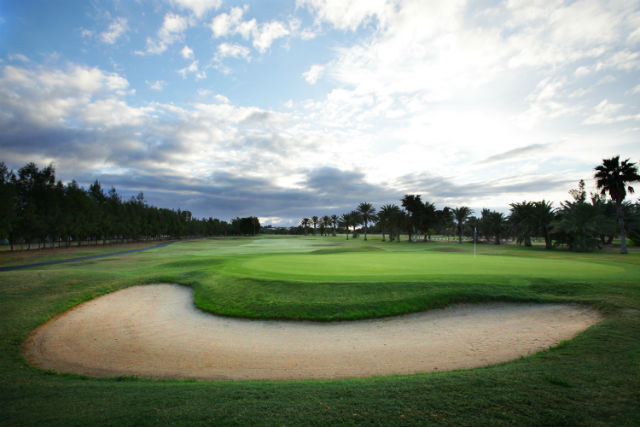 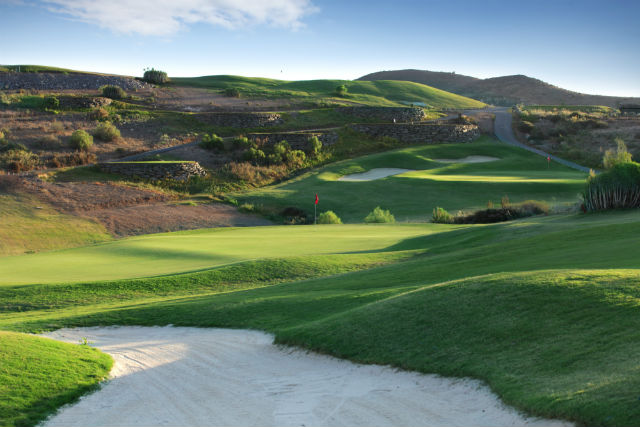 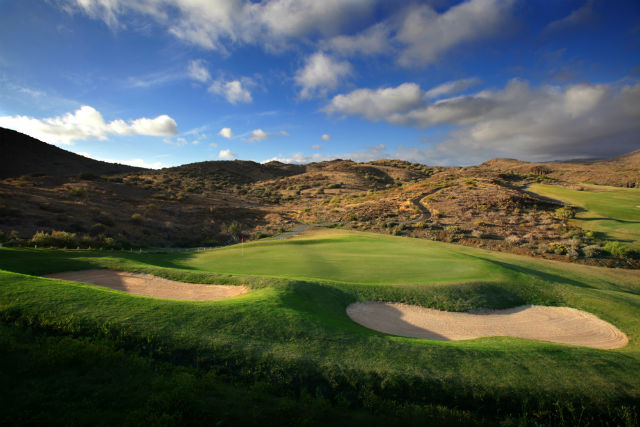 Head to the South of the island and the climate changes as does the scenery. This is where you will find the islands famous sandy beaches. In fact Maspalomas golf course borders the dunes of the stunning and popular beach that shares it's name. The dunes form an unusual hazard on the Par 73, 6700 yard course.

The Sheraton Salobre Golf Resort is also found on the South of the island. The resort is made up of a 5*, 313 room hotel as well as two 18 holes golf courses and a Aloe Spa.

There are 2 golf courses to play, either The Salobre South 'The Beauty' or The Salobre North 'The Beast' course both set in dramatic surroundings with some stunning holes carved into the natural desert rock

If you decide to stay and play in the South the Championship Course at Anfi Tauro Golf is a must. The course is set to a backdrop of stunning mountains, lush gardens and waterfalls making it a special course to play. It is recently constructed measuring 6000 yards with multiple tee boxes meaning that it suits all abilities.

Booking with Golfbreaks.com you have a wide range of stunning hotels in which to choose from including the magnificent Gran Hotel Lopesan Villa del Conde 5* beachfront hotel which is built in traditional Canarian style. It features 561 rooms, either with garden or sea views and is located very close to the Maspalomas bars and restaurants district.

The Hotel Gloria Palace San Agustín 4*, also on the South of the Island is located in a quiet zone of San Agustin just 600 metres from the beach and a 15 minute walk from the well-known area of Playa del Ingles.

If you would prefer stay on the North of the island the Bandama Golf Hotel 3* is a golf hotel in the true meaning of the words - perfect for the golfer who wants to play every day, and often more than 18 holes! Set in a protected reserve, this hotel is surrounded by stunning natural landscapes with two golf courses in close proximity - Real Club de Golf de Las Palmas is right on the door step while El Cortijo Golf Course is just 10 minutes away.

365 Beach days - Sunny all year round and 128 beaches to chose from. Beaches with cristal clear water and either fine golden or dark volcanic sand. Surrounded by immense cliffs or spectacular dunes. Switch off and take long walks full of light and freedom, they will have a soothing effect on your mind.

Biosphere Reserve - Gran Canaria is an Island of contrasts, a spectacular landscape showroom which stands out because of it's natural wealth, its microclimates and its unique geographical relief that make of it a real "Miniature Continent", a special feature that has driven the UNESCO to declare the western area of the Island World Biosphere Reserve.

A Sports lovers dream - Gran Canaria has an endless choice of activities that combine exercise with enjoying lush landscapes across the inland as well as spectacular coastline. The mild climate that prevails in the Island throughout the year makes it good to practice sports in full nature: golf, trekking, climbing or bike circuits as well as nautical sports: sailing, surfing, windsurfing, scuba diving and fishing.

Gran Canaria, a bridge across three continents - Witness the biggest historical adventure ever: the discovery of the New World. Its heritage as a stopover for travelers reflects in the open and cosmopolitan character of the island and in it's rich gastronomy. Towns and villages that have over 500 years of history, an architecture with colonial flavour and centuries-old traditions that mark a strongly Atlantic identity. The beauty of the historical center, Vegueta, has brought about a candidacy to become part of the World Heritage

Live Culture - Throughout the year, Gran Canaria is a feast. The privileged climate of the Island makes it possible to celebrate feasts and festivals at any time of the year, and then its squares, streets and beaches become festive stages. The Island's rich historic past also reveals in its archeological sites among which stands out the beauty of Cueva Pintada (Painted Cave).