Senior staff writer Adam Smith recently took a trip to Lumine Mediterránea Beach and Golf Community to play three courses on-site. This is the review for the Ruins course.

Located in-between the Lakes and Hills courses this little gem of a 9-hole course is certainly not to be missed. If you fancy a quick nine or if you still have the energy to add on a little round after an 18 on the two bigger courses then the Ruins is perfect.

Previously it was an area of olive and carob trees until Greg Norman was commissioned to design another nine holes alongside the Links course. Preserving the Mediterranean countryside was the most important aspect but also building around the Roman archeological remains dating from the second century BC was another task Norman had to contend with. Having a view of those remains on a few holes makes the Ruins a unique challenge but ultimately enjoyable.

As with some nine hole courses I’ve played sometimes the condition of the course is disappointing especially if it sits next to an 18-hole course on a resort, or in the Ruins case two 18-hole courses. Fear not though as the greenkeeping staff at Lumine keep the Ruins in as good a condition as the Lakes and the Hills. In fact my playing partner and I felt that the greens were quicker on the Ruins which certainly made for a tough test. 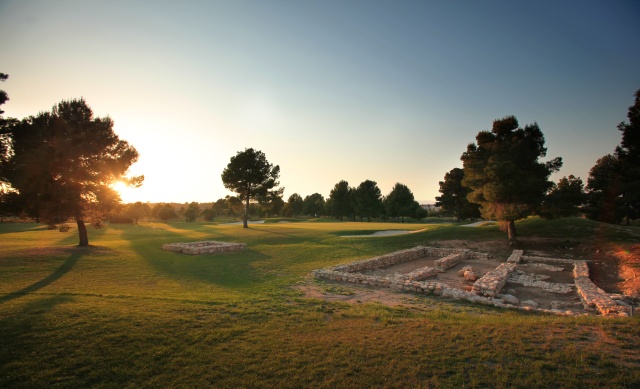 The quickness of the greens is the Ruins main defense against a good score. It plays slightly easier than its bigger neighbours but the Ruins is still a challenge and keeping your ball on the short grass is still imperative. There are some great quirky holes which are thoroughly enjoyable including a 100 yard par-3, a drivable par-4 and a very reachable par-5.

The opening is where you’ll see your first ruins, if you hit them you’re in trouble as they’re about 30 yards from the tee but your opening shot is an uphill drive with a generous landing area. There’s a fairway bunker that sits to the left of the fairway that is in play so try and avoid that. The approach shot continues uphill to a green that sits on a plateau which is a distinct feature around this course. It’s one of the flattest of the nine too and is a good size so two good shots should see you tick off your first GIR. There’s hidden dangers though, if you leak right on your approach two huge bunkers will grab your ball and it will be a tricky up and down as the green will be high above you.

You move from the flattest and easiest greens on the course to the most undulating and challenging on the par-3 2nd. A great short hole at 165 yards which is fairly flat with the green sitting next to a wall of ruins which hosts the next tee. There’s a big drop off the green for anything that is long or right but once you hit the green it is a devilish three tired monster. Where ever the pin is you’re going to have a difficult putt.

The 3rd is a relatively short par-4 but with a tough drive which is the reason it is the hardest hole on the course. The fairway is barely visable from the tee as the hills to the left hide the short grass from your elevated position. There’s not much of a landing area either and if you leak anything to the right then its dead as you’ll be landing in a huge area of wasteland. Along with the tee shot, the approach is slightly uphill to a green that again sits on a plateau so you’ll require two good shots to reach the green in two here. A large bunker front right and a pot bunker front left protect a green that slopes from front to back so you need to fly your ball all the way to the pin.

The 4th is a par-4 that plays downwind and downhill and if you get a good one away with a draw then you can reach the mouth of the green. The tree on the right-hand side of the fairway is your line with a draw. The green slopes back to front and is guarded by three bunkers one front left and right and another back right.

Just the ten bunkers face you on the 5th hole and the majority are in play from the best tee shot on the course. The traps are all the way down the left hand side and the tee looks directly at them so a soft fade is required to find the short grass. The green is again slightly elevated and is split by a huge undulation that runs across, virtually splitting the green in two. If the pin is at the back like it was for me then make sure you have enough club to get up and over the hump.

The 6th hole is the short par-3 playing around 100-110 yards. The easiest hole on the course is protected by three bunkers; one at the front and two through the back. The green is relatively flat so it’s a good chance to score well and gain a shot back on the course.

You’ll receive some tee shot rest bite on the 7th as the landing area here is quite generous. Another green awaits that sits above your hitting area that makes this hole tough. A run off area at the front means you have to fly your ball all the way but accuracy again is a must as five large bunkers are waiting around the green.

The last par-3 on the course is very quirky and I like that on a hole and indeed I like a course that has something different about it. The 8th features a little pot bunker in the green that sits about ten feet in and the pin was positioned right behind it when I played (I’m sure they heard I was coming). I subsequently ended up in the said bunker after hitting what I thought was a shot bang online. I’ll take the up and down sand save however. A great little par-3 where water does come into play to the right of the green but it’s strange as you don’t notice it as much as you’re fixated on the bunker.

The 9th or 18th is a great finishing hole and is one of the few points where you feel you can attack the course. A reachable downhill par-5 you’ll kick yourself if you don’t at least take par here. A huge tree that protects the front right portion of the green is the only obstacle on this hole other than a couple of fairway bunkers to the right of the short grass. For the long hitters these won’t be in play. 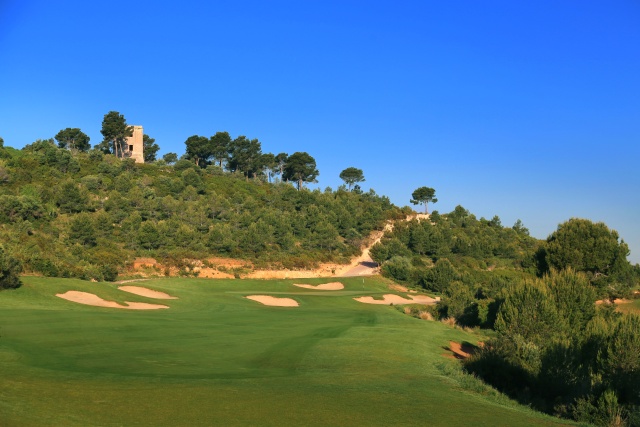 The Ruins is a really fun but still challenging round of golf whether you’re playing nine or 18. If you start to go around a second time you’ll think that you’ll remember where the pins are and try and hit for the safest part of the green but that’s easier said than done.

As mentioned before and on my Lakes and Hills reviews the greens at Lumine are just superb. Fast with a true roll and receptive if you’re coming in from the fairway.

The Ruins is great fun and well worth making the trip for just like the Lakes and Hills courses. Make an 18 out of it and you’re always trying to better your previous score and looking back it’s interesting that I didn’t. I scored better the first time around. Have a go yourself and let us know here at Golfshake how you got on.

Lumine rated and review on Golfshake

50 Golf Courses to Play This Summer Under £50