St Enodoc’s proud history of hosting amateur championships in recent times will be further boosted this year when the club hosts the English Women’s Amateur Championship from July 14 to 17 over its championship Church Course.

This marks the fourth time that St Enodoc has staged this blue riband event of ladies amateur golf. The club first hosted 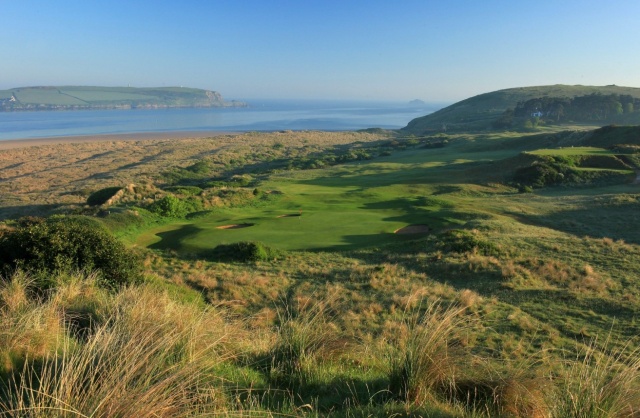 the championship (then known as the ELGA Championship) back in 1937 when the famous Wanda Morgan secured the top honours and then in 1993 it was the turn of Nicky Buxton to lift the trophy. St Enodoc was the original venue for the event again in 2002 although two days of gale force winds forced the event to be abandoned and it was subsequently played later that year at Littlestone when Surrey's Kerry Knowles came through to win.

In 1989 and 2005, the Church Course was the venue for the English Counties Championship and over the years it has been home to a number of regional and county competitions at amateur level that have also been played here.

England Golf awarded the 2014 English Women's Amateur Championship to St Enodoc, one of James Braid's finest links designs with stunning sea views, in recognition of the quality of this undulating, testing course and for its suitability for top women's amateur golf.

A composite course with a par of 71, using mainly the men's club competition tees to give a total length of 6,167 yards, has been specially compiled for this important tournament.

“St Enodoc is proud is be hosting the English Women’s Amateur Championship again and we are looking forward to welcoming England’s top female amateurs to our club,” says Tuck Clagett, manager of St Enodoc.

“We are particularly delighted to have the defending champion and 2012 British Open Amateur Stroke Play Champion, Sarah-Jane Boyd, in the line-up as she is from Cornwall, representing nearby Truro Golf Club. I am sure that this will spark some excellent local interest in the event as will having one of our members, Jenny Justice, playing in the championship. Jenny first started playing golf here at the club and I am sure she will be trying her hardest to wrest the title from Sarah-Jane.”

One of England’s top amateurs, 22-year-old Boyd is a member of England Golf’s Performance Women’s Squad and from 2007 to 2012 was the Cornwall County Champion.

As well as watching the action, St Enodoc members will be playing their part in the Championship by hosting some of the girls at home during the tournament and offering their services as caddies to help them around the testing Church Course.

Already 2014 is proving to be a significant year for St Enodoc; in addition to hosting this prestigious tournament, the course was included in Golf Digest Magazine’s inaugural ranking of the ‘World’s 100 Greatest Golf Courses’ in January, alongside the American trio of Pine Valley, Cypress Point and Augusta National which topped the rankings. Notably St Enodoc was one of just 11 courses in England that featured in the listing.

On home turf, the club completed a two-year overhaul of its Holywell Course, which is now widely regarded as a well-presented, short course that makes for an enjoyable round for golfers of all skill levels. Alongside the course works, a programme of major refurbishment of the clubhouse is about to come to its conclusion. Competitors in the English Women’s Amateur Championship will be able to enjoy the results of the major renovations that include new bar and lounge areas that now enjoy spectacular views of the course.

Founded in 1890, St Enodoc is a championship links that is both beguiling and challenging. Famed for its characteristic fairway undulations and firm greens, this stunning links is set against the backdrop of some of the greatest sea and estuary views of any course in the world. From every hole, the views of either the north Atlantic Ocean or the Camel Estuary are breathtaking.

For the quality of the course, St Enodoc remains extremely reasonable to play with green fees in the summer priced from £75 and £45 in the winter whilst the Holywell costs just £25. During the summer, the club also offers a Twilight Green Fee of £45 for a late afternoon round of golf.

Since 2009 St Enodoc has been a member of the Atlantic Links, a partnership of the six premier links courses in the south west of England, that has quickly established itself as one of the leading golfing destinations in England. St Enodoc is joined in this group by Trevose, Royal North Devon, the two courses at Saunton and Burnham & Berrow.

For more on the English Women’s Amateur Championship, go to:
www.englandgolf.org