The clubhouse that sits alluringly in the grounds of Stoke Park is possibly more famous than the exquisite turf that surrounds it. This maybe the case, however, movie lovers should certainly look past the white mansion and awe at the masterpiece designed by Harry Colt back in 1908 which still stands as one of the finest layouts in the world.

Colt would go on to create Wentworth and Sunningdale (New), along with re-designing Muirfield and giving his seal of approval to build Pine Valley which has been voted the best course in the world three times in the last six years.

This then should suggest that Stoke Park is well worth playing and I certainly would not disagree with that statement. As you’re playing, you look around and gaze admirably at the surroundings until you realise that you’re standing in a perfect picture from a fellow golfer across on another fairway.

Returning from America in 1788, John Penn proceeded to build the mansion, landscapes and monuments with help from architect James Wyatt. In 1813 it was all complete and up until 1908 the estate was a private residence until Nick ‘Pa’ Lane Jackson brought it and turned into what is the spectacular country club that it is today.

The hotel on-site offers luxury five star accommodation, both in the 21 bedrooms inside the mansion and a further 28 in The Pavilion, a recent £20million development. 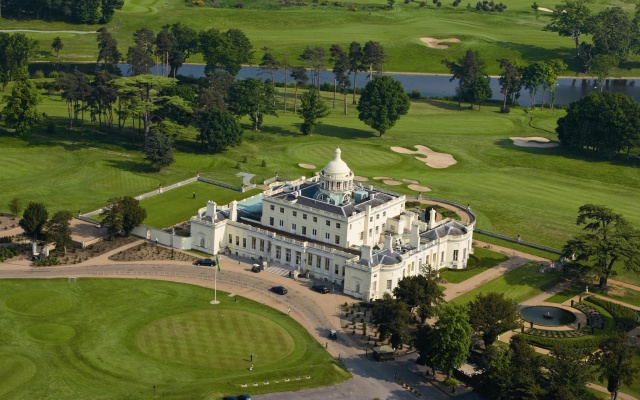 The mansion of course is famous itself for featuring in many a movie.  The most memorable being the backdrop in Sean Connery’s 1964 Goldfinger where James Bond defeated Auric Goldfinger on the 18th green. Bond would return to Stoke Poges in 1997 with Pierce Brosnan featuring in Tomorrow Never Dies. In 2004 the Bond theme would not knowingly continue as future 007 Daniel Craig starred in Layer Cake’s dramatic ending on the clubhouse steps. Inside, Hugh Grant and Rene Zellweger would use the Pennsylvania suite (named after Penn’s home state) as their romantic getaway in Bridget Jones’s Diary.

The mansion has the traditional feel with 21 individually designed rooms with open terraces with views of the historic gardens. The Pavilion hosts luxury bedrooms and suites with all the compliments you’d expect from a five star resort. The Club’s Health and Racquet facilities are available to use as a guest, which includes heated indoor swimming pool, steam rooms, state-of-art gym and all weather tennis courts. The award winning spa also offers treatments from around the world.

27 holes await you when playing or staying at Stoke Park. Holes 1-18 are considered the championship 18. The ‘Jackson’ nine, holes 19 to 27 are the newer of the three nines but having a walk round you still wouldn’t be disappointed if you were to include it in your round.

On the day of my visit a couple of the holes were closed, unfortunately due to the huge amount of rain we had the previous week (Feb 2014), however the course itself was in great condition and it meant I was able to play an excellent mix of holes. I'm also planning to go back to play the ‘other’ nine and remaining holes. 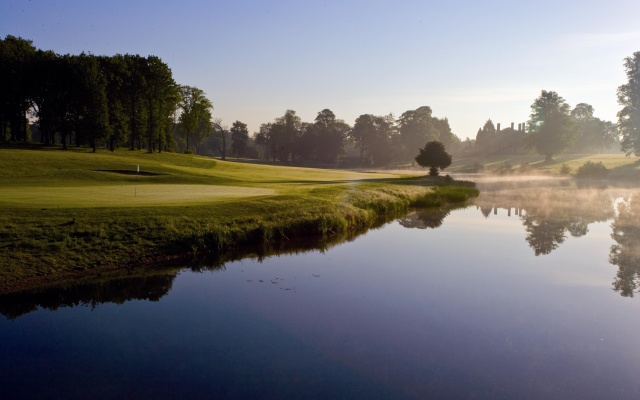 The first hole on the ‘Colt’ nine (1-9) begins right in front of the famous mansion giving you a great back drop as you start your round. The long par-5 should give you a good scoring opportunity if you plot your way past the fairway bunkers in range from your drive and second shot.

Speaking of bunkers, it is somewhat of a Colt speciality to have strategically placed bunkers in eye view off the tee and at various points on the fairways, not to mention the huge greenside hazards that protect the greens. If you look back or indeed have played on a Colt designed course you will know what I’m talking about.

Although quite open, Stoke Park still presents its share of difficulty. Add in the odd water hazard to the bunkers and long par-4’s hitting the fairway is key if you want to try and post a good score.

With this in mind you’ll approach the par-4, 4th with caution. The hardest hole on the course can be a monster when played into the wind. At 407 yards from the yellow tees it takes a couple of good hits to reach the green. Fairway bunkers are in view and reachable down the left-hand side. Those dangers start at around 245 yards. Stay right of those, but not too far as your approach will be block out by trees on the right-hand side of the fairway. Four large bunkers surround the 40 foot long green with slope off areas short and through the back. Walk off with par here and you’ll be jumping for joy.

One of the many things that stick out when playing Stoke Park is the par-3’s. All different, and all very enjoyable. You’ll have already played the 3rd before heading to the 7th tee which is the signature hole throughout all 27. Read the plaque on your route to the green you’ll know that Colt got his inspiration from the 16th at Augusta; when standing on the tee you’ll see why. Although mirrored with water on the right instead of the left as it is for the Masters, the 7th is a gem of a hole and my favourite of the day. A narrow target greets you but with the undulations running down towards the water and three bunkers to the left of the green gobbling up anyone trying to play safe, it’s a great test of accuracy.

The end of the front-nine is great fun. The short par-4 8th requires accuracy on the uphill tee shot. Get a good one away you can attack the flag. You’ll end the nine firing back towards the mansion on a great long par-4. On your approach, all you’ll see is bunkers, guarding the green. Better to be long than short is encouraged as a rescue or long iron is needed to get on in two.
You’ll have the chance to grab a drink as you take the walk in front of the mansion steps, around past the first tee and starters hut on your way to the 10th tee to start the ‘Alison’ nine (10-18). 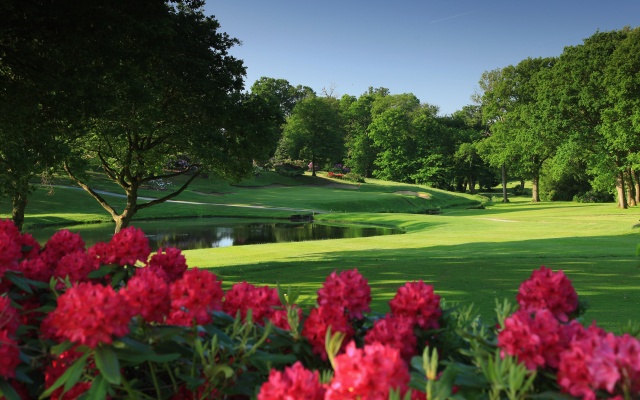 Club Secretary from 1908 to 1914 it’s said that Alison, Hugh to his friends, played one of the best shots in golf when he was playing for Oxford against Cambridge at Woking, he played off the clubhouse roof, over the hollybush and onto the 18th green  to halve the hole and the match.

A gentle start to the nine with a downhill par-4, you’ll quickly come to another great par-3, my second favourite hole here, the 11th. More signs of Augusta on this hole as it looks very much like the 12th with water in front and bunkers on the slope and behind the green. Off the yellows, it’ll only be a short iron but be confident and trust your yardage which if the wind is blowing you’ll find tough as the tee is surrounded by trees and you’ll think it’s as still as anything.

The second hardest hole on the course follows and much like the 4th, it’s into the wind, the 12th is a monster, especially if you want to play it as a three shot hole.  Three bunkers lay in wait around the ideal spot for a lay-up something which I’m sure Colt had in mind. Manoeuvre you way past, through or over these and you’ll be firing into one of the smallest greens on the course.

The 14th shoots back up to the mansion, with the par-3 15th teeing off in touching distance from it. The 16th is a great par-4 that starts a great closing stretch on the Championship 18. With water running all the way down the left side of the hole, as well as the fairway sloping that way, hitting the fairway is tough. Get a good drive away and you’ll have a short iron left, to a green which keeps in conjunction with the hole and slopes towards the watery hazard close by.

Another 400 yard par-4 lies in wait at the 17th; bunkers right and left off the tee need to be avoided along with the water that drifts in from the 16th and sits around 30 yards from the green. There is space to run your ball up over the water but you must miss the four bunkers and give it enough to beat the slope that slightly elevates the green.

A tough tee shot is between you and the final green. Uphill all the way up until around 230 yards, incidentally where three bunkers wait for any stray balls leaked to the right. The approach to the green is a picture; a huge bunker to the right and no less than eight pot bunkers to the left. Your eyes will drift to the mansion sitting further to the left of the green but a great finishing hole never the less. 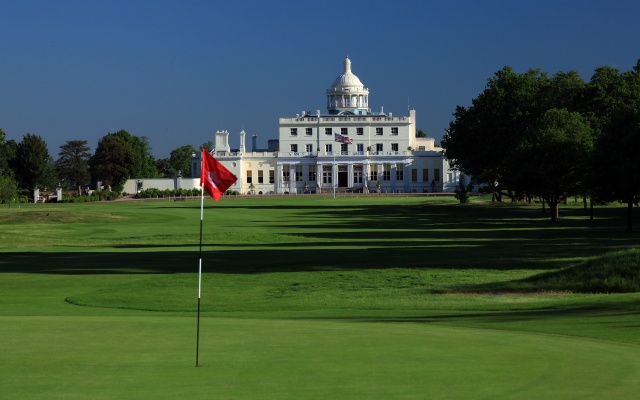 All in all, I now know why Stoke Park is held with such high regard by everyone that has played here. From the moment I arrived I was greeted with a smile and the staff couldn’t do enough for me. From the pro shop to the porters and kitchen staff to the starters hut, everyone was polite and so helpful. This in itself is a great credit to Stoke Park.

The practice facilities further enhance the resort with driving range, short game area and putting green all in top condition something of which you’ll find out on the course.

I certainly look forward to my return here with great anticipation.

To find out more about Stoke Park visit www.stokepark.com

Hazlemere Golf Club
Buckinghamshire from £12.00 Save 30%