Before I played at Liphook Golf Club I have to confess I didn’t know much about it. I knew that European Tour professional Sam Hutsby was a member, that it was a Golf Monthly top 100 venue and that a short trip down the A3 would get me there. After I finished playing, all I could do was berate myself for not investigating further.

As you turn into the club and drive towards the clubhouse, sneak peeks of the golf course give you the sense that a superb golfing experience lies in store. When you see the charming clubhouse overlooking the 18th green and first tee, you simply cannot wait to get started. First impressions are so often misrepresentative but, in this case, couldn’t be more telling.

Liphook Golf Club houses, undoubtedly, one of the best courses I have had the pleasure of playing. Granted, I have only played at a handful of top-class venues, but I find it hard to believe there are many better courses open to visitors. The course – which winds in and out of dense woodland - presents a real mixture of demanding golf holes that challenge every aspect of your game. In general, the fairways are fairly generous, but stray and your ball will find heavy rough, heather, bushes or trees. It is by no means long and the premium is on accuracy over distance, but there are a selection par-4s that can only be reached with two good shots. All the holes are wonderfully designed and perfectly manicured, and I can’t disagree with the club’s affirmation that the greens are some of the best in the country. 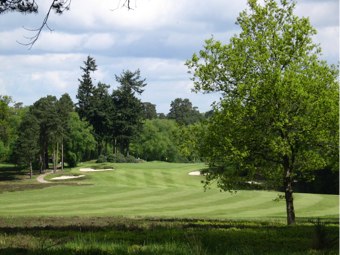 The first six holes of the golf course present an exceptionally difficult start to the round, especially when the rain is pouring and the wind is swirling. Another feature of the course is the difficulty in reading the wind, which tends to change direction as it gusts through Liphook’s many tall trees. The wind, however, isn’t in your thoughts as you contemplate the prospect of a 202 yard opening par-3, right in front of the clubhouse.

The hole plays significantly downhill, but the green is hard to hold with a long iron, especially with everything landing short kicking to the right. Any shot hit slightly right must be well struck to clear a large oak tree, with trouble lurking through the green in the form of three rhododendron bushes. Hutsby, the European Tour professional, made an eight here in the Lipohook Club Championship – testament to the difficulty of the hole.

The second is the first par-four of the course, and plays at 425 yards from the whites. The fairway is large, but slopes from right to left, leaving an awkward stance with a long iron for your second – especially with bushes lurking left. Second shots are semi-blind to a tiered green sloping from front to back.

The first par-5 of the course comes at the fifth, and is probably the easiest of the first six holes. The green is reachable in two if your drive finds the fairway, but the entrance to the green – which is surrounded by bushes and trees - is narrow, and heavy rough lies in wait just off the fairway. The putting surface itself is tricky to negotiate, especially when the pin is located on the back tier.

If you are to have a good nine, good scores must be made on the seventh and eight holes, but that is easier said than done. The seventh is only a wedge, but the green slopes severely from back to front with anything missing the surface leaving a very tough up and down. It also plays downhill, and is extremely hard to judge with the wind swirling above. The eighth is only 330 yards, but your ball must be perfectly placed from the tee, or you will be playing your second from sand or blocked out by trees protecting the right half of the fairway. On this course, a short hole doesn’t guarantee respite.

If you are able to make it through the front nine with a respectable card, you will be rewarded with some scoring opportunities on the back side - but not without executing good shots. The tenth is a blind tee shot, but if you find the fairway you can attack the pin with a wedge or short iron. The eleventh hole is a mid-length par-3 surrounded by deep bunkers, but par is more than attainable.

If you haven’t played the first two holes of the back nine well, the omens are bad for the stroke index one 12th. It is a long, straight par four playing at least 30 yards uphill. Two bunkers intrude into the fairway from both left and right around the 210 yard mark, with only a dead straight drive making it through the middle. The green is out of range from either bunker, but a lay-up short requires a second of at least 220 yards, uphill to a tiered green with trouble long and left.

The 13th is arguably the best hole on the course. It is a long par-5 that sweeps round from right to left, offering panoramic views of the golf course. The hole is over 500 yards long, but anything hit to shape the hole will catch a significant downslope and shoot forward towards a ditch 150 yards from the green. After a good drive, something in the region of 220 yards will remain to a green some 20 yards above the level of the fairway. A beautiful hole.

Holes 14, 15 and 16 are shortish par-4s, and do offer up chances if you are in position off the tee. However, like so many of the holes at Liphook, anything slightly off line will be punished, whether it be by  trees flanking the fairway on 14, internal out of bounds on 15 or treacherous greenside bunkers and swales on 16.

The closing hole is another stunning par-5, and another that is reachable in two with a good drive. The drive plays uphill with trees right and heavy rough left, but a good strike from the tee could roll over the crest of the hill and catch a sizeable downslope on the other side. From there, a long iron remains to a multi-tiered, extremely fast green overlooked by the clubhouse. A two-putt is by no means guaranteed and, as I watched from the clubhouse after my round, I saw two players putt off the front of the green from the back tier.

Liphook Golf Club really is a wonderful golfing experience. There is a great variation in holes, the course is in perfect condition, the greens are exemplary and there is a perfect balance between tough and fair. Overall, I would give Liphook Golf Club 4.5/5.