I was delighted to be asked by Golfshake to review golf clubs and courses in my area. I immediately wrote my wish list. At the very top was Hayling Golf Club, a course I’ve had the pleasure of playing a number of times.

At the time of writing this we’ve been in the pandemic crisis for the best part of this year and there’s no end in sight. It’s been an immense and unforeseen challenge for all clubs to adapt and respond to the ever-changing rules and demands they’ve been dealt. Rolling out the welcome mat to guests isn’t what it used to be. It’s the people and spirit of each community that makes the difference. In this respect, Hayling hasn’t merely risen to the challenges, they’ve excelled in every aspect.

At the beginning of October, my co-author, Ryder Cup golfer and PGA Master Professional, Peter Dawson and I contacted Chloe Bossell, the Club’s operations manager. Not only did she welcome us, we were invited to have lunch and a round with Club Captain, Matt Williams and fellow member Steve Richardson, another Ryder Cup golfer.

It was a wonderful day!

Hayling Golf Club is carved into the southern crest of Hayling Island, near Portsmouth, Hampshire. On one side it looks out to the Solent, Portsmouth Harbour and the Isle of Wight and the other hugs Langstone Harbour and Nature Reserve. This is classic links golf in every respect and a challenge for any calibre player.

It’s hard not to wax lyrical, as like all seaside links it is protected by Mother Nature’s glorious unpredictability. Relentless wind, proper rain, blinding sun – frequently all at the same time.

On arrival, we were warmly welcomed into the iconic art deco clubhouse by Matt and Steven. Built in 2002, and opened by the late and great John Jacobs, it has been designed to make the very most of the breath-taking views of the Solent. It doesn’t take long before one starts to think about the history of Portsmouth Harbour, such as the sinking of the Mary Rose and the indomitable part the harbour played in the history of both world wars. The course itself incorporates WWII pillbox bunkers and other wartime reminders.

Interestingly, Steven and Matt explained one role the island played in the last great war. Hayling would be lit up at night to distract German bombers who were set on wiping out the Royal Naval Fleet. In one of many incidents, servicemen were lost when a large bomb landed on the island.

The ‘Sandeman Bar’, named after the club’s founders, the Sandeman family offers a breath-taking panoramic view. The balcony, pictured above, is the perfect spot to enjoy the commanding vistas and superb hospitality. It is difficult to tear oneself away!

The club was formed in 1883 by three Sandeman brothers, who owned property and land on the island, having made their fortune in the Port and Sherry business.

The original 9-hole layout was designed by ‘The General’ Joe Lloyd who would win the US Open in 1897. The course was extended to 18 holes a year later and over the years benefitted from design changes from Harry Colt (1919) and JH Taylor (1905 and 1921), Today’s layout is attributed mainly to the changes brought in by Tom Simpson in 1932 and 1946.

I grew up playing golf at Burnham & Berrow, North Somerset – another magnificent seaside championship course. For me, playing seaside links is the true art form of golf and nothing compares (although heathland courses come close). I’m one of the traditional golfers that cherishes the old-fashioned ways where the natural terrain is intrinsic to the course design. Where ancient sheep bunkering from the elements played the same role in modelling the landscape as modern day diggers do today.

Hayling is a great example. Walking to the 1st, past the practice green and starters hut, I got a buzz of excitement, not just because I was playing with three charming gentlemen two of whom were Ryder Cup players, but because the view of what was to come was so enticing.

Hayling is a classic seaside links, with subtle undulating greens, hidden borrows and an amazing collection of deep rivetted fairway and greenside bunkers all of which are positioned cleverly. At 6,529 yards off the white tees its design ensures that the prevailing winds protect the course and present superb challenges to any calibre of golfer.

The front nine is flat for the most part and tends to be played mainly into the prevailing wind.

Both of these raise challenges. There are well-known courses that start with a par 3, (Peter played in the Ryder Cup at Royal Lytham in 1977) but 180 yards into the prevailing wind is certainly a terrific start.

The 1st requires consideration because it is the first shot of the day and nearly any club is the right or wrong choice. The Ryder Cup guys and Matt the Captain hit varied hybrids and I cautiously chose my driver and we were all either near or on the green.

The 5th is a shorter par 3 at 165 yards and a cleverly designed hole. It looks pretty easy from the tee but in this case, looks are deceiving. The green is much narrower than it appears, and your tee shot can easily slide off and down a valley son either side. The green is also protected on the front left by yet another deep riveted bunker.

Neither is over 500 yards and each offers a welcome birdie opportunity provided you can avoid the well-positioned fairway bunkers from the tee. 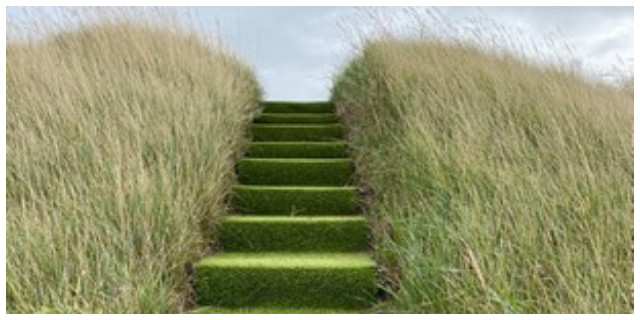 The par fours are all delightfully different, doglegging right and left and varying in length from 350 to 430 yards. The three stand-out holes for me are:

The 6th is a genuine stroke index 1. At 430 yards, it is the longest and the most difficult hole on the front nine. Crossed by a hazard about 50 yards short of the green if requires a well-positioned drive and then a very well struck second to carry to the green. I took the only other option which was to lay-up 100 yards short with my second.

The 8th is the shortest par 4 on the front nine but far from easy as the second is a blind shot over the dunes. There is a small bunker about 200 yards from the tee which seems to act as a magnet as Captain Matt unselfishly demonstrated.

The 9th is a magnificent hole, 408 yards into prevailing wind. You climb up a wonderful set of steps to one of the highest points on the course and enjoy magnificent 360° views of the course, The Solent, Portsmouth and the Langstone Nature Reserve. Like many holes at Hayling, the line you take from the tee is key. Too far right and you have too long a second shot, too close down the left and the carry is long and fraught with danger, long rough and bunkers.

Like the front nine, the back nine offers a terrific variety of holes. It a little more undulating and to the most is down the prevailing wind something which at my age I favour!

Like the front 9, there are two par 3s both of which are equally challenging.

The 11th – at only 152 yards it is the shortest, however it is by no means easiest. It has a narrow plateau green surrounded by deep bunkers. It is also open to the elements and so the prevailing wind off the Solent plays a big role.

The 16th – At 180 yards it is the same length as the 1st. The green is large and undulating but protected by a magnificent bunker (recently and superbly renovated by course manager Greig Easton and his team) and cleverly positioned to gather shots that drift left to right on the prevailing wind and the roll-off from a large area for those landing at the front and right of the green.

The 14th – at 536 yards, this is the longest hole on the course. It benefits from being down the prevailing wind, however it’s rife with potential problems including water down the left and two well-located fairway bunkers designed to catch those who bite off more than they can chew. Steve eagled the hole.

These offer great variety of design and length from the 269 yard 10th, to the 441 yard 12th, the latter being one of the most challenging par 4s I’ve ever played. All are cleverly designed and present potential problems for anyone even slightly offline.

The 10th is a highly enjoyable risk-reward short par 4 and a welcome relief after the difficulties of the front nine, especially coming directly after the tough 9th. You drive from an elevated tee, ideally with a slight draw (or fade in the case of left-handed Peter), it is very driveable although offline tee shots will be penalised by gorse, heavy rough and a well-positioned fairway bunker. Both Steve and Peter knocked their tee shots on the green, Peter emerging with a delightful eagle to put us 1 up.

The next par 4, the 12th is a toughie. It is long and hazardous. A good drive leaves a long second to a raised green. With the exception of Steve who hit the green in two we all laid up and played it as a par 5. Wonderful hole, delightfully difficult.

The second plays downhill to a narrow sloping green which is protected by the slopes and a cleverly positioned greenside bunker. It isn’t a long hole at 340 yards, but the narrow plateau makes the drive tricky and accuracy key.

Having lost one down, Steve played the back nine in four under, we adjourned to the 19th where Matt and Steve introduced us to a number of members who made us feel right at home. We sat and refreshed ourselves basking in the afterglow of a magnificent round of golf on a brilliant course and soaking in the late afternoon glorious views.

Wonderful day as guests of the fantastic @Haylinggolfclub yesterday to review for @golfshake. Delighted to be accompanied by Club Captain Matt Williams, Ryder Cup golfer Steve Richardson and my co-author @KnackeredGolfer. pic.twitter.com/JDZ6RTNOdK

Peter Dawson - Ryder Cup Golfer, Master PGA Professional and co-author of Now for the Back Nine

“The short holes 5-11-16th would grace any tournament, amateur or professional alike.

You never tire of playing Hayling Island, it forces you to be imaginative on virtually every shot. It is a lovely links golf course and being close to the water playing conditions change from day-to-day – or from hour-to-hour. The wind is the big protector of this lovely and challenging golf course.

On the day we played the fringes were excellent. The decision of choosing between a putter, wedge or hybrid was a pleasure to have and a reflection on the excellent condition of the course.”

It was a truly wonderful day and I cannot find fault with any aspect of it.

I am in great danger of either repeating myself or running out of superlatives to describe the course which is a brilliant design a terrific test of golf in a fantastic location and was in excellent condition thanks the greens staff who are led by Course Manager Greig Easton who has done a superb job since joining from Royal Cinque Ports.

A fantastic course and club.

The course was in superb condition, the best I have ever seen it.

The greens were smooth and true and putted beautifully.

A clever design that along with the natural elements presents many challenges.

The practice area is beside the first hole and was spacious.

We were made to feel so welcome.