Looking out of the window you can make out the large strip of land that is Bull Island, it's man made and increasing in size every day and on it you can see the familiar layout of a golf course, it looks rugged, even from 1000's of feet up in the air.

It is my first view of Dublin and the golf its has to offer.  I was flying in from Gatwick airport for 48 hours of what I hoped would be Golf, Guinness and great food in and around the famous city.

The course in question on Bull Island? Well, that would be Royal Dublin, a links course that has held the Irish Open and is home to Irish Amateur every year and my first port of call for the day.

We land and are quickly through security and headed to Royal Dublin, just a short drive from the airport, it makes for an ideal course to play on arrival or departure day. Arriving at the course we are warmly greeted, something that we would become very accustomed to on our trip and treated to some early Irish hospitality. A fantastic brunch (White and Black Pudding Anyone?) followed and was fit to satisfy any appetite, even my rather large one after a very early start.

While at Royal Dublin you get an sense of the history of the course, it has been home to Christy O'Connor Senior for many decades and the club house is packed with echoes of the past. You can spend a wonderful, 30 minutes just looking at the cabinets which are  filled with antique clubs and memorabilia.

Despite not being built in dunes that are centuries old (they have been created as a result of the man made, Bull Wall), Royal Dublin feels and plays like the oldest of links courses, especially on the front nine as it heads straight out from the clubhouse in true links style, hugging the bay. Luckily on this occasion it was playing downwind and thus gave me a gentle introduction to my Irish golfing odyssey. 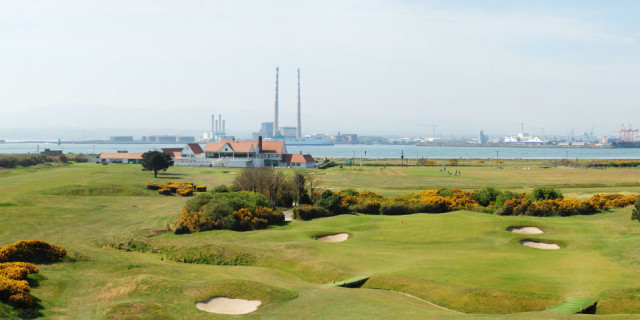 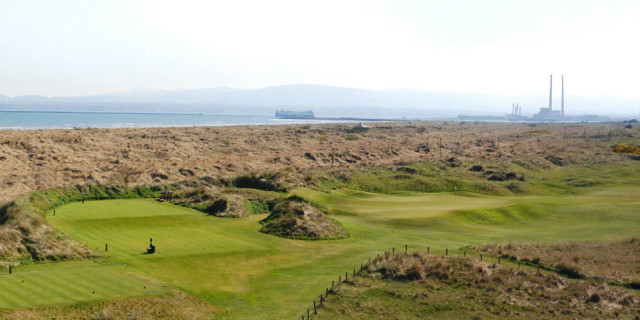 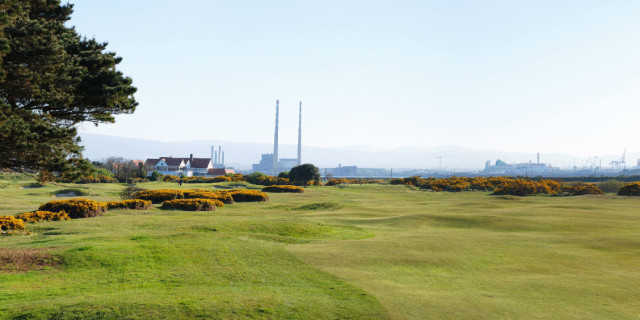 A particular highlight on the front nine was the par 5 sixth hole which requires an accurate drive before snaking it's way along the bay eventually finishing with a raised green set back and to the right into the dunes. It has a wonderfull green complex which typifies some of the work than has been contucted by renown golf clourse architect. Martin Hawtree to bring the course up to modern championship standards.

Making the turn we encountered the brilliant par 3 ninth which lays at a right angle to the the eighth and starts your turn for home. Pot bunkers guard the green short, left and right, so make sure you hit enough club or your ball will be gobbled up by one of those penal traps.

If the front nine was kind to us, the back nine decided it was time to get tough! Playing back into the wind, it was hugely challenging. It feels a little less linksy than the front nine, but arguably offers some stronger golf holes with gorse an ever present danger as it builds to a dramatic finish.

The sixteenth, seventeenth and eighteenth are steeped in history, Royal Dublin's favourite son, Christie O'Connor Snr enjoyed one of the all time great finishes in 1966. He was behind in the tournament, but finished  eagle, birdie, eagle (2,3,3) to win the Irish Open by 2 shots.

Those last three holes are a treat, with my favourite being the drivable Par 4 sixteenth. The green is full of character, even a great drive onto the putting surface guarantees you nothing!

The eighteenth offeres a different type of challenge and reminded me somewhat of Royal Liverpool as the hole dog legs around the practic ground (which is out of bounds). Accuracy and a strong nerve is required on this hole. The eighteenth green enjoys a superb backdrop sitting in fornt of an almost colonial looking club house.

Royal Dublin, as I mentioned, is just a short drive from the centre of the city and so to my groups delight we had checked in to the Alexander Hotel, showered and were ready for dinner within an hour of leaving the course. Dublin has boomed over the past 20 years enjoying huge economic growth and despite the recent downtown it can now claim to match almost any European city for it's choice and quality of restaurants and all the while it still offers a traditional charm and so with that in mind we headed out to eat.

We dined in great style, but the highlight for me was settling down in the corner of a traditional Irish Pub with a Guinness and listening to a local fiddler. A fitting end to a fabulous day!

The next day was all about what Dublin has to offer in terms of parkland golf. There are a host of world class parkland courses within easy reach of the city including Close House and Druids Glen, but our destination was The K Club, home to the 2006 Ryder Cup and this years Irish Open.

Yet again the welcome was warm, I spent an enjoyable hour looking around the locker rooms, which is packed with Ryder Cup memorabilia, undoubtedly very different to what I found in Royal Dublin, it was no less fascinating.

A few swipes on the range and the first tee beckoned. Now, I know the K Club from TV and so recoginised the first hole, it is the one where Tiger hooked it horribly into the water left. That lake is in play for mortals like you and I, but for maybe the best player that ever lived, no way! So if you ever play The K Club, slide one down the right and know that you did a better job than Tiger Woods.

The K Club feels massive, everything about it, the hotel, the clubhouse, the range and the golf course, all just feel, well BIG! Built to accommodate tens of thousands of spectators, each hole has large amounts of space around it, although the trees that have been planted in recent years to tighten the course are really starting to make an impact. 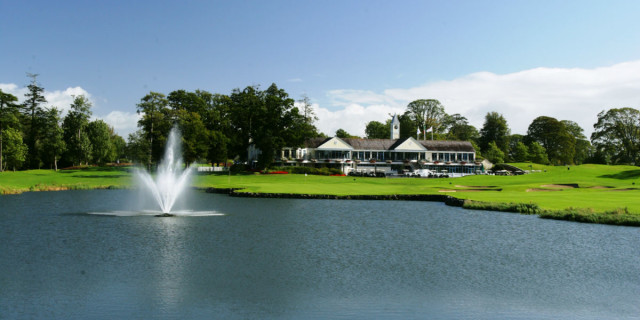 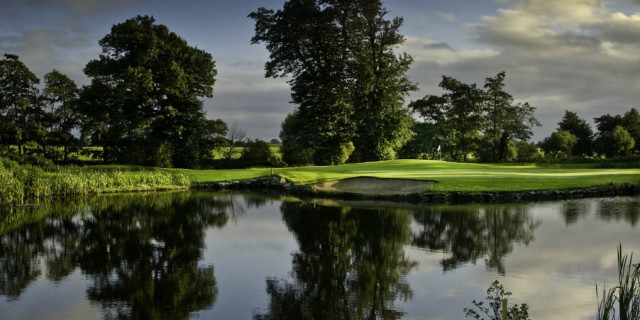 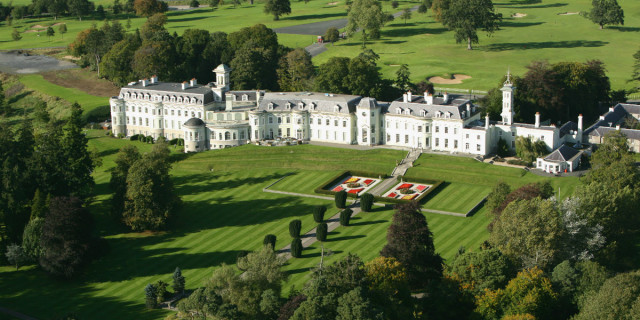 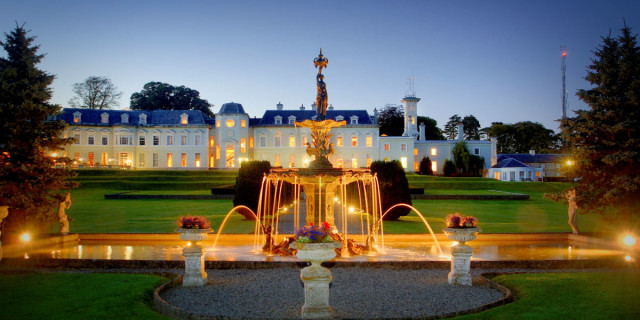 There are a couple of very memorable holes on the front nine, I enjoyed playing the par 5 fouth that sweeps down the hill, urging you to boom a tee shot and give yourself a great chance to reach in two, but the standout hole was the hugely charming Par 3 eighth. The River Taffey runs along it's right hand flank and the hole is set to the grand backdrop of the K Club Hotel. The hole itself is fairly short an quite simple, but that did not stop some in my group finding the drink!

The back nine begins with a not too demanding Par 5 meaning that you can get off to a bit of a flyer as you head for home. There were some big highlights on the back nine as memories of the Ryder Cup came flooding back, but none more so than the par 5, sixteenth hole. It follows the Liffey which runs along the left side of the fairway. One tip....keep it straight up this hole, even if it means taking a little less club. Several of my group bit off a little more than they could chew and found a watery grave (myslef included).

While the tee shot is spectacular on the sixteenth, it is the second shot for the pros or third shot for amateurs that really sets it apart. The green is set on the far side of the River Liffey surrounded by woodland, you will have seen it on TV and it is even more spectacular in person.

The seventeenth provides maybe even more danger. A half moon hole that bends to the left and follows the river, it is short, but hugely challenging. However, if you get your drive away it presents a great chance for birdie.

The eighteenth delivers a fitting finish as it doglegs right over a rise and down the hill. Long hitters will fancy a pop in two, but will need to clear the lake in front of the huge back to front sloping green.

The K Club is fast building it's reputation as one or Ireland's 'must play' courses with the Irish Open and the Ryder Cup providing a wealth of history, it is always nice to follow in the footsteps of the legends of the game and the K Club provides a great chance to do just that. If you are planning on playing and staying in Dublin then The K Club is somewhere you must consider. It is worth mentioning that The K Club not only boasts the Palmer Ryder Cup Course, but also the Smurfit Course, more open in it's layout,  it provides contrast and a different type of challenge to it's illustrious partner.

Lavish, elegant, even regal is how I would describe the Hotel at the K Club, it is quite literally the best room I have ever stayed in! The K Club Hotel has long been recognised as one the finest in Ireland, modeled on a French Chateau it offers four different restaurants. two bars and a world class spa - If you enjoy great golf and some of the finer things in life, then this is your kind of hotel!

So, my 48 hours in Dublin was over, it was action packed, I played two great and hugely contrasting golf courses, enjoyed some superb food and of course, some brilliant Irish hospitality. Dublin is easily accesisble from the UK and you can pack a lot of golf into 2-3 days and enjoy the delights of a truly great European city.  If you havent been golfing in Dublin, go soon, you won't regret it!

For more information on The K Club - Click here

To learn more about golf holidays to Ireland - Click here