THE Phoenix Open is usually won by a certain type of player. Phil Mickelson and Tiger Woods are past winners, and Bubba Watson loves the place and will surely go home with the winner's cheque at some stage. In fact, he nearly did so at the weekend.

So we are talking about larger than life characters - a description you would never apply to Brooks Koepka who honed his skills on the European Tour, won the Turkish Open in November and picked up his first title on the PGA Tour at TPC Scottsdale, Phoenix. 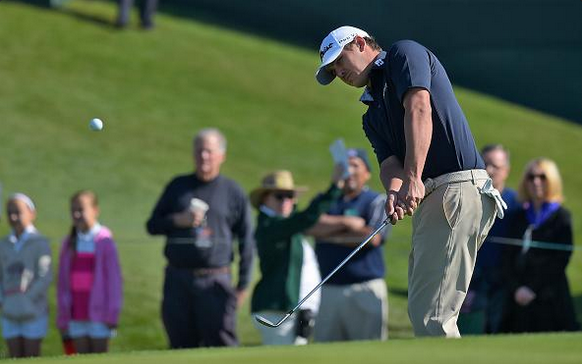 Although he may be a quiet young man, Koepka hits the ball miles. He won't care how he won, but he knows that Martin Laird handed it to him on a plate after dropping a shot at 322-yard 17th, which everybody else was driving. In fact, The Scot then hit his tee shot at the 18th into the water. Three shots gone - and that's how he finished behind the winner.

Koepka, who split the final fairway, needed only a par to close the deal at 15 under, finishing with a 66.

Laird recently said that golf has moved down the pecking order in his list of priorities after becoming a father. If he isn't putting in the work it is when the pressure is on that you will be found out.

But what is most extraordinary about Laird's performance (and he really should have won) is that he has finally abandoned the belly putter. Anchored putting is to be banned from January 1 next year and Laird, who has not used anything other than a belly putter since turning professional, has started to use it conventionally without the foggiest idea about whether he would still be able to putt with it.

It turns out that he had nothing to worry about, and anybody who witnessed his play at TPC Scottsdale could not help but be impressed with just how well he holed out.

The final round began in spectacular fashion. Laird was playing with Hideki Matsuyama, of Japan, and Koepka, carrying home hopes. Laird led by three and watched on the first fairway as Matsuyama holed his second shot for an eagle. The Scot shrugged it off and left his own approach stiff for a birdie.

Up ahead, Bubba Watson picked up three shots in his first holes to announce his presence. It was that kind of a day. Koepka finished on 15 under, Watson, Ryan Palmer and Matsuyama. Laird was fifth, tied with the amateur, John Rahm.

"It feels amazing to have won," Koepka said. "I put in a lot of hard work over the winter and it has paid off for me. I have changed my putting stroke and had a look at a lot of birdies."

Even though Tiger Woods missed the cut in spectacular fashion, vast crowds poured into the TPC Scottsdale course, and were as raucus as ever - nowhere more so than the 15,000 who packed into the grandstands surrounding the infamous par-three 16th hole, where Francesco Molinari, the Italian Ryder Cup player, had the experience of a lifetime on Saturday when he holed in one in the third round. The resulting cheer could be heard in Texas!